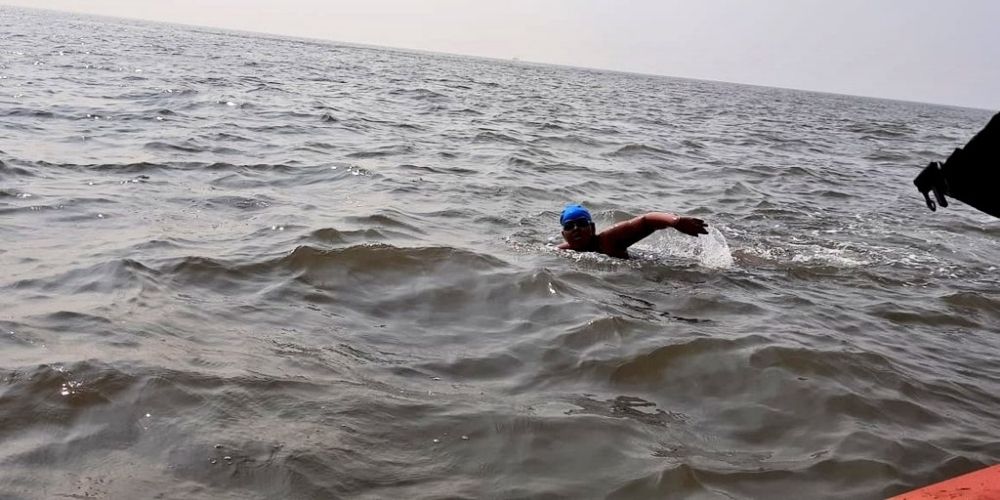 The daughter of an Indian Navy sailor made history by swimming 36 km in the Arabian Sea to raise awareness of Autism Spectrum Disorder (ASD), officials said on Thursday.

The 12-year-old girl, Jiya Rai, an autistic case, is the daughter of sailor Madan Rai and swam the distance from the Bandra-Worli Sea Link to Gateway of India in 8 hours 40 minutes on Wednesday.

"This is a new world record as she set a record last year by becoming the youngest girl with ASD to swim 14 km in the open sea," the official said, adding that the relevant authorities would confirm the feat.

The 7th-grade student of the Navy Children's School - has dedicated her astounding feat of swimming to raising awareness of ASD.

Starting early, she plunged into cold waters on the BWSL at 3.40 am and reached her destination 36 km away at 12.30 pm, where the gathered crowd greeted her with applause.

After completing the swim, Jiya was congratulated with a trophy by President of Greater Mumbai Amateur Aquatic Association Zarir N. Baliwala and others at an event near Gateway of India.

In February 2020, Jiya completed an insidious swim from Gateway of India to Elephanta Island, a distance of 14 km in 3 hours 27 minutes, setting a world record for becoming the youngest girl with ASD to swim 14 km across the open sea.

The record-breaking event on 17 February 2021, was supervised by the Swimming Association of Maharashtra and supported by the FIT India movement of the Union's Ministry of Youth and Sports Affairs.

Ms Jiya Rai, a 12 yr old daughter of a naval sailor, swam from Bandra-Worli Sea Link to Gateway of India #Mumbai on 17 Feb to raise awareness about Autism Spectrum Disorder (ASD). Jiya who herself was diagnosed with ASD, swam the distance of 36 km in 8hr 40 min. @DefenceMinIndia pic.twitter.com/B6q5srnh3y