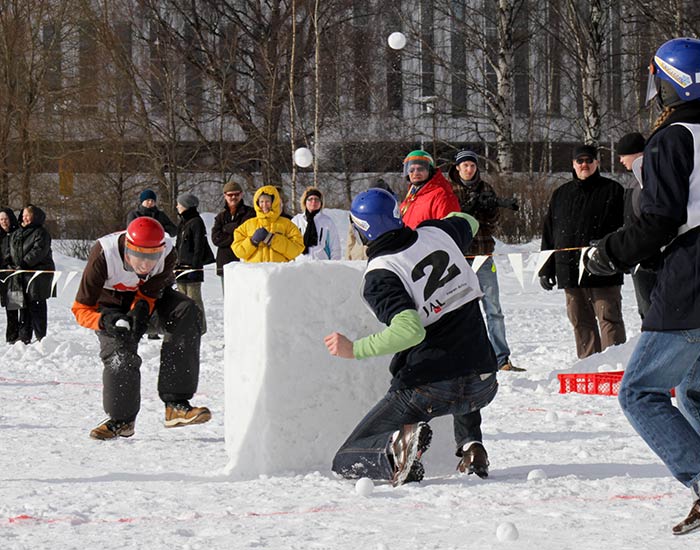 Yukigassen, which literally means "snow battle" in Japanese is a snowball fighting game from Japan. It was started in Mt. Showa-Shinzan in the country's Sobetsu town in 1989. The first Yukigassen event outside of Japan was hosted by Australia in 1992. Initially, the sport was governed by the Japan Yukigassen Alliance, but in 2013 the International Alliance of sport Yukigassen was formally established. The match is played between two teams of 7 players each including four forwards and three backcourts (and two substitutes also). Each match consists of three 3-minute sets. The team that first captures the opponent's flag or eliminates more players of the opponent team with snowball hits wins the set and the first team to win two sets wins the match. Each of the teams can use up to 90 snowballs in a set. The sport is played on a court with certain measurements, and all the players wear special yukigassen helmets with face shields.

The sport Yukigassen originates from the island of Hokkaido in Japan in the year 1987 when some people decided to take advantage of the plentiful snowfall of that area while watching south-east Asian tourists having a blast throwing snowballs at each other.

The Yukigassen Rules Committee was formed, and the official set of rules was complete on Dec 6th of that same year.

Helmets and snowball makers were introduced to the game.

The 1st Annual Showa Shinzan International Yukigassen was conducted on Feb 25-26. Over seventy teams participated in that tournament.

The first Yukigassen event outside of Japan took place in Australia.

The Japan Yukigassen Alliance was established

The first international yukigassen organisation outside of Japan was formed in Finland.

Yukigassen helmets are custom designed helmets used to protect the head from cold as well as strong shots and yet provide clear vision for marking shots.

A snowball maker is a device that makes multiple snowballs at once. (quick fact: over two hundred seventy snowballs are used in a single yukigassen match. a standard snowball maker makes only forty-five at once).

The shelters are generally made up of wood or snow and measure 90cm (Height) x 90cm (Width) x 45cm (Depth) in dimensions.