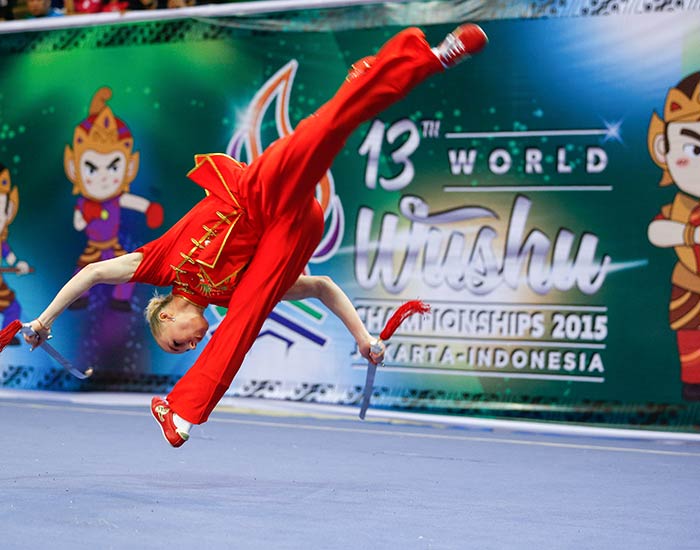 Wushu-Taolu is a Chinese martial art similar to gymnastics in which athletes perform choreographed routines comprised of basic movements such as kicks, stances, balances, pushes, jumps, sweeps and throws) on a padded carpet. The performances are judged on the quality of movements used, overall performance and the degree of difficulty of the routine. Some taolu events are performed without weapons and some with weapons.

The Chinese art of taolu was born in 1958 with the establishment of the All-China Wushu Federation. The sport is governed by the International Wushu Federation (IWF) which was established in 1990 and organized the first World Championships of Wushu (both sanshou and taolu) in 1991 in Beijing, China.

It is a long staff or cudgel made of white wax wood.

It is a flexible spear made of wax wood and the spearhead is attached with red horse hair.

It is a double-edged sword used in taiji events.

It is a double-edged straight sword/blade.

It is a single-edged sword described as willow-leaf shaped.

It is a southern style knife which is a curved one-sided blade or sword.

A sash is a colored belt which indicates the different skill levels. The colors vary from one style to the next, depending on the school or the level.

Athletes wear traditional kung fu uniform which is usually fastened with buttons and have an officer’s collar and is a long, full/half sleeved costume.