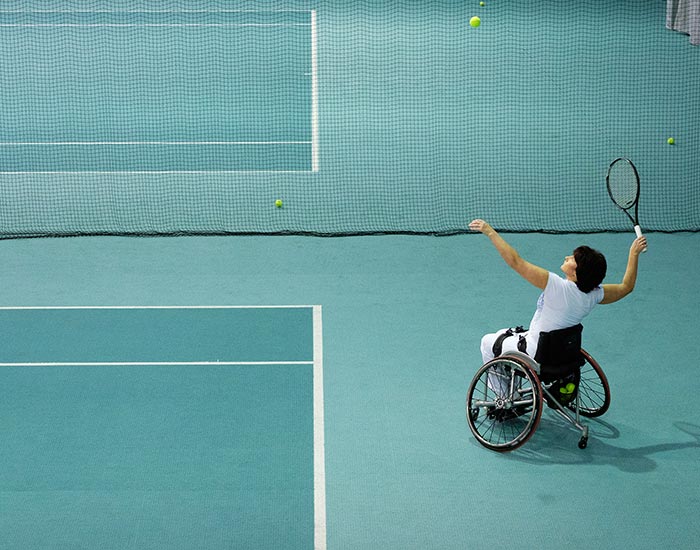 One of the most popular sports in Paralympics and all around the world for para-athletes, para tennis, is a technical as well as a tactical sport that not only conditions the physique but also the mind of the performer. The sport is played by players in more than 200 countries. It is much similar to that of the pedestrian tennis regarding the size of the court, balls and rackets whereas the differences are that it uses uniquely designed wheelchairs and the ball may bounce up to two times where the second bounce may take place outside the court.

Wheelchair tennis was brought into existance by Brad parks as a recreational sport for the para-sportspersons which then witnessed huge popularity by the late 1970s. In a very short span of time the sport became popular worldwide and in the year 1988 wheelchair tennis was introduced at the Seoul Paralympic Games as a demonstrative event. International tennis Federation (ITF) is also the global governing body of wheelchair tennis.

The primary objective is to hit the ball over the net into the opponent’s court in such a way that the opponent can’t play a valid return.

Wheelchair tennis expanded in fame in 1976 because of the endeavours of Brad Parks, who is viewed as the maker of competitive wheelchair tennis. In 1982, France turned into the principal nation in Europe to put a wheelchair tennis program in place. Since at that point, much exertion has been made to advance the game at the first class level.

The game rapidly wound up well known worldwide and was acquainted with the Paralympic Games as an exhibition occasion at the Seoul 1988 Summer Paralympics. In 1990, wheelchair tennis vied alongside the non-disabled competitors in Miami. This proceeded for over fifteen years. It was only at the 1992 Summer Paralympics in Barcelona that wheelchair tennis obtained the status of a full-fledged sport. The 2000 Summer Paralympics in Sydney supported open gratefulness enormously and prompted the acquaintance of the game with the four-yearly Grand Slams of Tennis. In 2004, after the endeavours of Rick Draney, the Quad classification was added to the Paralympic Games.

The Wheelchair Tennis Class 8s that happened at the 2002 Australian Open saw competitive wheelchair tennis occur at the same time and the same venue at a Grand Slam for the first time. The Masters series was made in 2005, which included every one of the occasions at the Grand Slams and the end of year titles, as Wimbledon and the US Open joined Melbourne. In 2007 Roland Garros joined, and the Classic 8s were supplanted by the Australian Open which had been held at a similar scene two weeks after the fact. In 2009 all occasions played at the physically fit players' Grand Slams were renamed Grand Slams.

The Netherlands has commanded various triumphs at major competitions including the Grand Slams and the Paralympic games.

For the 2013 season, the ITF chose to embrace match tiebreakers instead of a third and deciding set in doubles matches. Anyway, the sudden death round would just be utilised at the World Team Cup and some occasions which were appraised as ITF1 or lower. The grand slams, in any case, were allowed to settle on the configuration of their competitions.

Each country may send a total of four men into men’s singles, four women into women’s singles along with three quad players in the quad singles. In all, four women and four men may participate as teams in men’s and women’s doubles and a maximum of two players may compete as a team in the quad doubles.

Amputees may use arm and leg prosthetics to be able to play the sport like arm prosthetics can be used to grasp the racquet.

An athletic tape or an ace bandage wrap is used by players who don’t have the grip strength for holding a racquet. Sometimes, orthopedic racquet holders or grasping gloves are also used if more support is needed.

In this sport, players use a sports wheelchair which is lighter than everyday wheelchairs and allows the player flexibility of movement. A positioning strap across the waist and thighs is used to keep the player stable on the chair.

The playing area is same as that of pedestrian tennis.

The referee must be certified by the ITF as an ITF White Badge Referee. Following are the duties of the referee:-

It is mandatory to have ball boys/girls in the matches. They must be trained before permitting them on the court.

The primary objective is to hit the ball over the net into the opponent’s court in such a way that the opponent can’t play a valid return.