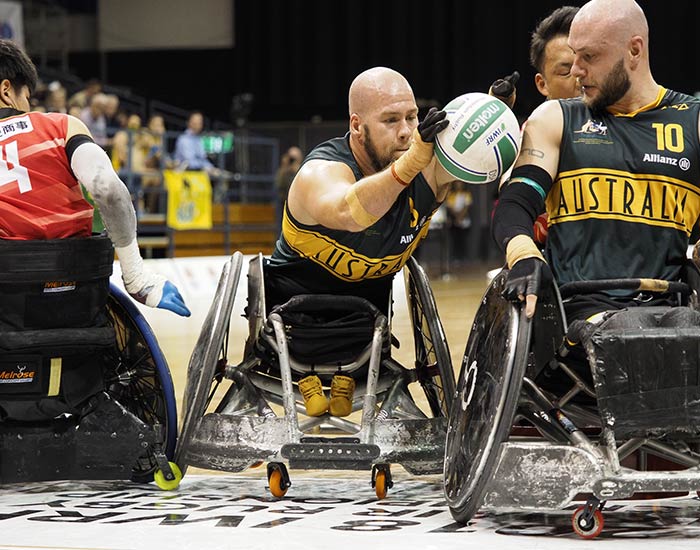 Wheelchair rugby is a contact team sport for athletes with a physical disability. This unique sport contains the elements of rugby, basketball and handball where the athletes of the opposing teams carry the ball to the opponent’s goal. The contact between the players’ wheelchairs is allowed, and in fact, it is an integral part of the game as the players use their wheelchairs to hold and block the opponents.

Originally called murder ball, Wheelchair rugby was invented in the year 1977, Canada when a group of quadriplegic athletes were looking some alternative for wheelchair basketball. They wanted a sport that would have reduced hands and arm function and would allow equal participation of all the para-athletes, and hence the game was invented. Since then, the game started gaining attention and is now played by quadriplegic athletes worldwide. The International Wheelchair Rugby Federation is the global governing body of the sport, and it has also been included in the Paralympics games in 1994.

Wheelchair Rugby began in Canada in 1977 and was made by Jerry Terwin, Duncan Campbell, Randy Dueck, Paul LeJeune and Chris Sargent, 5 Canadian Wheelchair Athletes, to be a game for Tetraplegics. The diversion was initially called Murderball because of its forceful, full-contact nature and was intended to permit tetraplegic competitors with a broad scope of functional capacity levels, to play vital offensive and defensive roles. Wheelchair Rugby was presented in the USA in the mid-'80s trailed by Great Britain later.

The first global competition was held in Toronto, Canada in 1989, with clubs from Canada, USA and Great Britain contending. In 1990, Wheelchair Rugby showed up at the International Stoke Mandeville Wheelchair Games as an exhibition event and in 1993, having 15 interested nations, the game was perceived by the ISMWSF as an official game. Along these lines, an ISMWSF Wheelchair Rugby Sport Section was framed, i.e. the IWRF.

Two teams each of twelve players and with four players on the field compete against other.

The straps give the athlete a good hold over the wheelchair. Good strapping provides stability to the player which helps them to play the sport efficiently.

The three most important areas where strapping is done are:-

Many different types of strapping are accessible and can be made from leather, rubber, neoprene, nylon or other materials.

Mostly all the wheelchair rugby players wear gloves while playing as it is considered as the vital part of the game. The gloves protect the hands and skin of the player from bruises, cuts, and chaffing. It also provides the player, a good grip to hold on to the ball and the wheelchair as well.

The wheelchairs used in the sport are of two types which are described as under:-

Defensive wheelchairs include bumpers set up to hook and hold other players. These wheelchairs are most often used by players with less function (0.5, 1.0, 1.5).

It is played indoors on a hardwood court with measurements same as of the basketball court. The field measures 28 metres by 15 metres with the key area measuring 8 metres by 1.75 metres deep at each end.