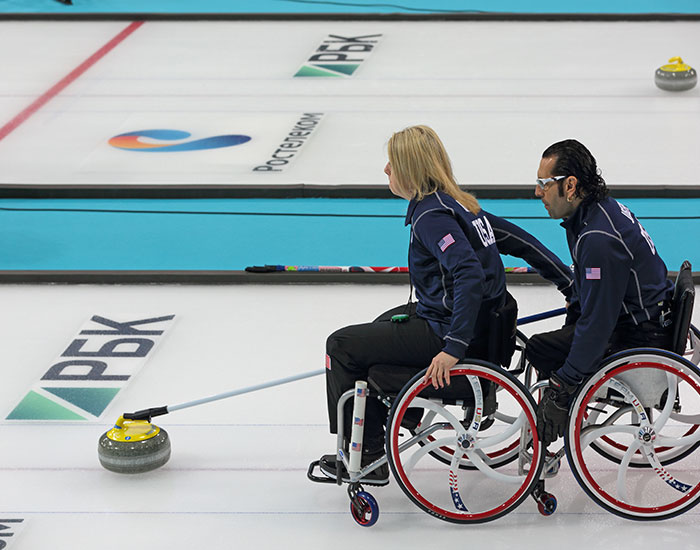 Wheelchair curling is a Paralympic sport in which athletes having significant impairments in lower limb or gait function (players with cerebral palsy, spinal injuries, etc.) can participate.

The main objective of the game is to score more points than the opposing team by sliding the granite stones on the ice sheet such that they come to rest within the "house" and as close as possible to the tee.

Wheelchair curling was first presented amid the 2000 World Handi Ski Championship in Crans Montana Switzerland. Switzerland and Sweden were the leading nations attempting the game at the time, and three groups (two from Switzerland and one from Sweden) went to a class/workshop alongside portrayal from the World Curling Federation and other invested individuals.

Amid the class, there was an immense talk on the most proficient method to play the diversion maybe on a shorter field of play with junior stones. It was chosen that the amusement ought to be performed as near the ordinary game as could be allowed, and at the end of the course, the standards were defined.

The next year the first International Wheelchair Curling Bonspiel occurred in Sursee Switzerland. This ended up being a Test Event for the main World Wheelchair Championship which happened in January 2002.

In the March of that year, the International Paralympic Committee allowed official medal status to Wheelchair Curling for mixed gender teams. The organising group of the Torino Paralympic Winter Games in 2006 consented to incorporate wheelchair curling in their program.

Nowadays, Wheelchair Curling is practised by athletes from 25 countries.

In women’s, men’s and wheel chair Curling, the teams can have an additional fifth player known as the Alternate- a substitute.

Each team has a Skip and Vice-Skip to direct the play for the team. The playing positions as commonly known as Lead, Second, Third and Fourth.

The leading equipment used in Curling are:-

1) Curling Stones: These are circular and are made of granite quarried from the Ailsa Craig Off of Scotland, which consists of a plastic handle that allows control at the release.

5) Curling Gloves: Lightweight gloves are worn by Curlers for a better grip of the broom and to keep the hands warm.

The team's Skip stands in the house and guides the player who is sliding where to deliver the stone. The player sliding the stone must release it before it crosses the nearer hog line. The other two players/ teammates sweep the ice with the Curling Broom in front of the Curling Stone to help the stone travel farther. A game has ten ends.

Each of the four players in the team delivers two stones during each end, alternatively with the opponent making 16 stones per end. This rotation is maintained throughout the game.

There are three types of shots- a Guard, a Draw and a Double Takeout. The team with the hammer/ last stone draw is more likely to win the end.

Scoring is done after each "end", with whichever group is nearest to the centre of the house being granted a point.

Further points are granted for each stone that is nearer than the best of the opposition.