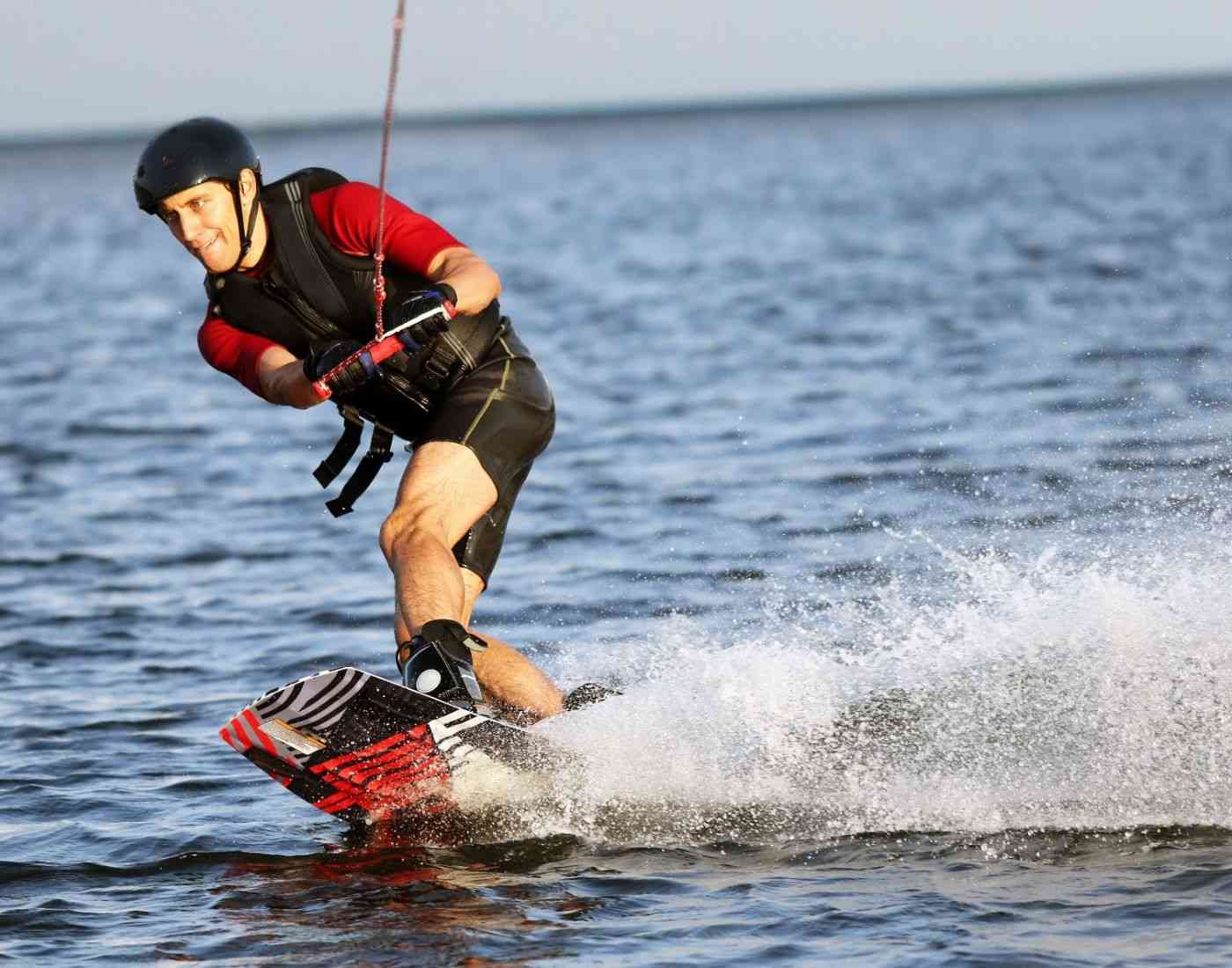 Water skiing is a high-speed surface water sport in which a skier is towed at great speeds behind a powerboat, skimming the surface on one or two skis. The sport requires adequate upper and lower body strength, good balance and muscular endurance. Water Skiing was invented by Ralph Samuelson in 1922 when he used a pair of boards being skis and a clothesline being a towrope on Lake Pepin in the Lake City, Minnesota. The sport has developed over time and was included in the 1972 Olympics as an exhibition sport. The water skiing participants are around the world, in Europe, Australia, Asia, Africa and the Americas Alone in the U.S., there are approx. 11 million water skiers and over 900 sanctioned competitions of the sport every year and Australia boasts around 1.3 million water skiers.

Water skiing was developed in 1922 when Ralph Samuelson utilised a couple of boards as skis and a clothesline as a towrope on Lake Pepin in Lake City, Minnesota. He tried different things with various positions on the skis for a few days until 2 July 1922. Samuelson found that inclining in reverse in the water with ski tips up and jabbing out of the water at the tip was the ideal technique. His sibling Ben towed him, and they achieved a speed of 32 kilometres for each hour (20 mph). Samuelson went through 15 years performing shows and training water skiing to individuals in the United States.

Samuelson experienced a few emphases of gear in his journey to ski on water. His first hardware comprised of barrel staves for skis. He later attempted snow skis, yet at last, created his structure out of timber with ties made of segments of cowhide. The ski rope was produced using a long window sash cord. Samuelson never patented any of his ski gear.

The first patent for water skis was issued to Fred Waller, of Huntington, NY, on 27 October 1925, for skis he grew freely and showcased as "Dolphin Akwa-Skees." Waller's skis were developed of furnace dried mahogany, similar to certain vessels around then. Jack Andresen patented the first trick ski which was a shorter, balance less water ski, in 1940.

In 1928 Don Ibsen built up his very own water skis on the West Coast, failing to have known about Samuelson or Waller. In 1941 Don Ibsen established The Olympic Water Ski Club in Seattle, WA. It was the first such club in America. Ibsen, a player and business visionary, was one of the soonest producers of water skis and was a main devotee and advertiser of the game. In 1983 he was drafted into the Water Ski Hall of Fame in Winterhaven, FL.

The game of water skiing remained a dark movement for quite a long while after 1922, until Samuelson performed water ski shows from Michigan to Florida. The American Water Ski Association formally recognised Samuelson in 1966 as the first recorded water skier ever. Samuelson was additionally the first ski racer, slalom skier, and the first coordinator of a water ski show.

Parallel to this, an enthusiastic mariner, sportsman and early adopter of water skiing, the youthful Swedish architect Gunnar Ljungström (1905-1999) spearheaded water skiing in slalom moves from 1929. An exhibiting behind a speedboat was made to the Swedish public at the 100th commemoration of the Royal Swedish Yacht Club in Sandhamn outside Stockholm in 1930.

Water skiing increased worldwide consideration in the hands of an acclaimed advertiser, Dick Pope, Sr., regularly alluded to as the "Father of American Water Skiing" and organiser of Cypress Gardens in Winter Haven, Florida. Pope developed a particular picture for his amusement park, which included many photos of the water skiers highlighted at the recreation centre. These photos started showing up in magazines worldwide during the 1950s, focusing on globalising the game for the first time. He was additionally the first individual to finish a bounce on water skis, hopping over a wooden incline in 1928, for a separation of 25 feet. His child, Dick Pope, Jr., is the innovator of shoeless skiing. The two men are in the Water Ski Hall of Fame.

Water skiing has developed over time. Water skiing competitions and water skiing rivalries have been composed. As a display sport, water skiing was incorporated into the 1972 Olympics. The first National Show Ski Tournament was held in 1974, and the first ever National Intercollegiate Water Ski Championships were held in 1979. The Home CARE US National Water Ski Challenge, the primary challenge for individuals with handicaps, was sorted out ten years after the fact.

The first patented structure of a water ski which included carbon fibre was that of Hani Audah at SPORT labs in 2001. Its first incorporation in competition slalom skiing was in 2003.

A strong and flexible rope about 75ft. long is attached to a handle that is held by the skiers which helps them in towing along with the ski boat and provides speed to the skier.

Specific towboats with a small hull and flat bottom are employed to pull a skier behind it, moving fast on the surface of water creating movement for the individual who balances over skis.

A narrow strip of hard but light material or wood that is worn on foot to move with pace over the surface of ice/water as a sport/recreation. In the case of water skiing, a pair of skis (made of light wood material) is worn by skiers that help in skimming over the surface of the water while skiing.

Skiers wear waterproof boots that have a strong ankle support and lock down buckles that increase the responsiveness of the skis.

It is an inflated personal flotation device (PFD) worn by the skiers for protection against injury and drowning. It turns the wearer into a face-up orientation with their bodies inclined backward.

Flexible suits made from neoprene are used by skiers with padding in the abdominal area to protect the ribs against any injury caused by the high-speed impact of the water. These suits must allow exceptional freedom of movement to the skier.