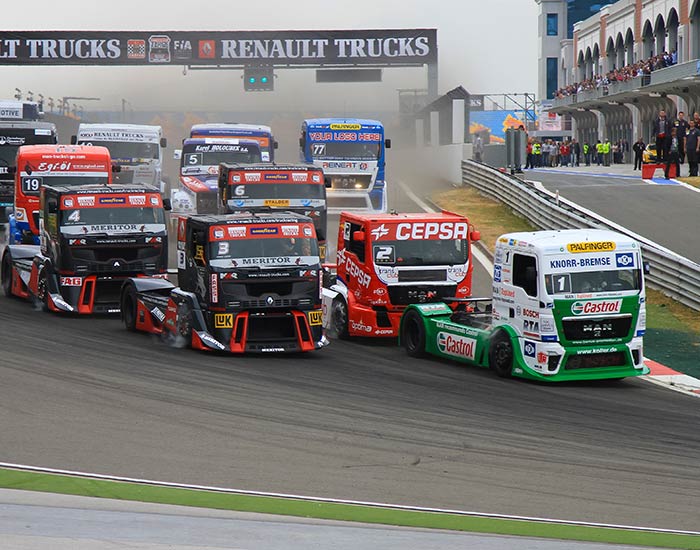 Truck racing is a type of motor racing which includes modified versions of heavy-duty tractor units on the racing circuits.

The sport was originated at the Atlanta Motor Speedway in the United States on 17th June 1979 after which the races took place on dirt or paved ovals in the Eastern United States and used the normal working trucks. After 1986, the trucks became highly modified and shed more than 2000 pounds in weight. In 1985, the FIA European Truck Racing Championship was created and since 1996, Brazil host the Fórmula Truck which features several factory teams.

The minimum weight limit for the trucks is 5500 kg and the maximum speed is restricted to 160 km/h for safety reasons. These races typically start from a rolling start and last from 8 to 12 laps. While the sport is not meant to be a contact motorsport, the massive size of the vehicles and limited width of the tracks produces plenty of close-quarter action. However, injuries to the drivers are very rare.

Drivers wear a full-face helmet with visor made of a composite material like Kevlar or carbon fiber with hard shell for protection against injuries.

Drivers wear fireproof ankle-length boots made of soft, cushioned leather that have thin rubber soles to provide good grip and slip-free control on the pedals.

Drivers wear a one-piece driving suit made of fire retardant fabrics like Nomex that must protect him/her from third-degree burns for a period of at least 12 seconds. Long flameproof underwear beneath the suit provides extra fire protection to the drivers. The suit has two large handles on the shoulders that enable the driver to be lifted free in case of an accident.

Trucks used in the racing sport are heavy tractor units modified according to the requirements of the race. The European trucks must weigh at least 5500kg and have 12-litre turbo-charged diesel engines. These trucks have tyres made of special sticky rubber to help grip the track and are restricted to speeds up to 160 km/h, for safety reasons.