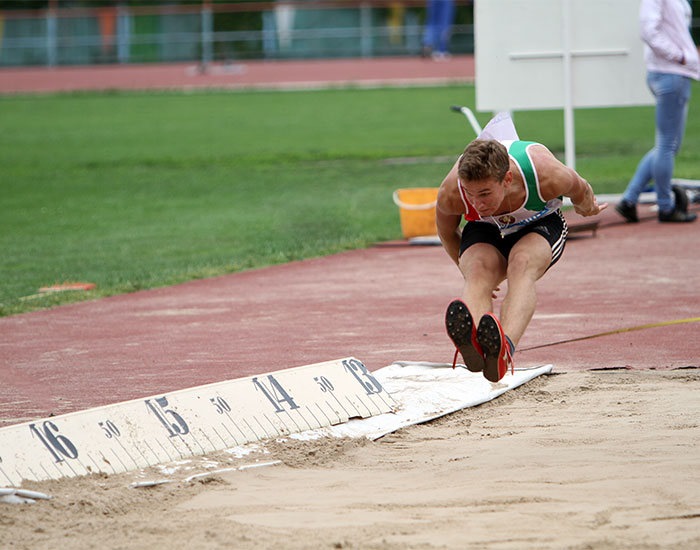 Triple Jump, also called hop, step & jump is a track and field athletic event. The long jump and triple jump are together referred to as the "Horizontal Jumps". In this event, athletes sprint along a runway then from the take-off board they jump forward, land on the takeoff foot, then take a step onto the other foot and finally jump into the sandpit.

The athlete who covers the greatest distance from the board to the sandpit is declared the winner.

As per the historical sources on the ancient Olympic Games, it is mentioned that occasionally jumps of fifteen meters or more had taken place. This led the sports historians to have a conclusion that there must have been a series of jumps which provided the basis for the triple jump.

Moreover, there is no reported evidence except the authors of victory poems who recorded some details about the event that it must have been included in the ancient Olympics.

The triple jump was a part of the inaugural modern Olympics in 1896 Athens, Greece.  Although at the time the event consisted of two hops on the same foot and then a jump. But the new format of hop, skip and jump was standardized in 1908.

In fact, the first modern Olympic champion was James Connolly (American Athlete and Author) in triple jump event. Later in 1996, the women’s triple jump was introduced into the Atlanta Olympic Games. Francoise Mbango won the gold and became the first female athlete from Cameroon to win an Olympic medal in 2004 Athens, Greece.

Viktor Saneyev of the Soviet Union won a hat-trick of Olympic men’s Triple Jump titles from 1968 to 1976 and Christian Taylor of the US had won Olympic titles in 2012 and 2016.

Cleated shoes with cushioned soles are used by jumpers to have a good grip on the surface and to firmly support the feet on landing.

Close-fitting, lightweight vests and shorts with athlete’s ID on both sides of the vest are worn by the athlete to lower wind resistance.

The playing area in the Triple jump sport consists of a runway, take-off board, plasticine and sand pit.

The objective of this technique is to accelerate to a maximum speed at the take-off. Athletes judge the approach run up in a way such that the leading foot lands as close as possible to the end of the take-off board without stepping or crossing the take-off line (A band of Plasticine is placed after the take-off board). Commonly the boards are set 40 feet (12.19 m.), 32 feet (9.75 m.) and 24 feet (7.31 m.) from the pit.

After the approach run, the three phases of the triple jump are the hop, step and the jump phase. These three phases are done in one continuous sequence.

The main technicality of this technique is to land (hop) on the same foot as that from which the athlete has taken off and by focusing all momentum forward. The hop landing is starting of the step phase.

In this phase, the athlete utilizes the backward momentum of the take-off leg to immediately execute a jump forward on the opposite leg. By this way, the athlete maintains horizontal velocity, distance and gets prepared for the next phase i.e. the jump.

This phase starts with the landing in the “step” phase with the same foot and then is similar with that of the long jump. One of the three primary flight techniques is used by the athletes to cover a significant distance- Hitch-kick, Sail or the hang technique.

Coordinate the work of the judges and validate the attempt of the athletes by indicating a fair jump with a white flag and a foul jump with a red flag.

Most championship competitions involve six jumps per competitor in which the athletes those with shorter marks are eliminated after three jumps. Moreover, if the competitors are tied, the athlete with the next best distance is declared the winner.

This event requires speed, power, strength and amongst all balance. At major championships the format is usually a qualification followed by final.

To jump/leap as far as possible into a sandpit from a takeoff point to win the event.