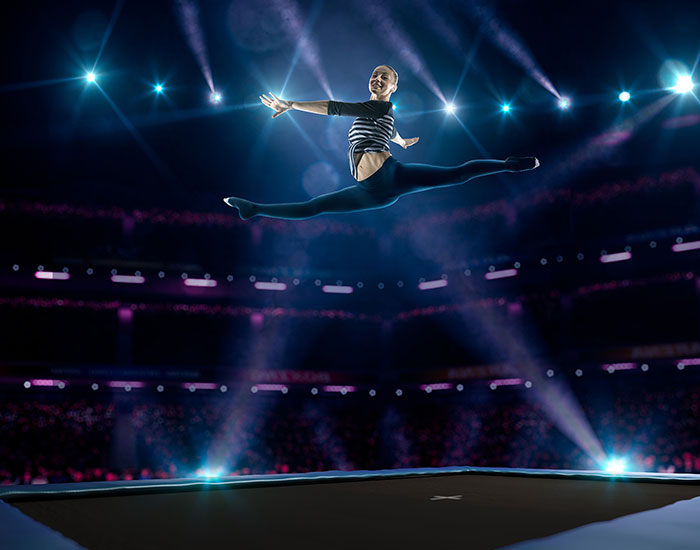 Trampolining is one of the gymnastics’ disciplines in which athletes perform acrobatics while bouncing on a trampoline. The skills performed by the gymnasts are a combination of movements like somersaults, body landings, shaped bounces and twists performed in positions as the tuck, pike or straight position. In 1936, George Nissen constructed the first folding trampoline in his garage and named it by modifying the Spanish word "trampolin" for the springboard.

In this event, gymnasts run up over a runway and jump onto the sloping end first and then on the flat part before dismounting on the landing area. Skills are performed during the jump as well as at the time of dismounting.

In this event, two athletes perform the exact same routine on two adjacent trampolines and at the same time.

It is a discipline of trampolining which combines some of the skills of artistic gymnastics with those of trampolining. The routine involves two passes, each involving eight skills (like somersaults) and ends with a dismount skill. This event is also known as power tumbling.

Trampoline is a well-known gymnastics equipment that has a profound place in almost every individual’s childhood.The equipment is composed of a piece of taut, a robust fabric that is stretched and placed between the outer steel frame with the aid of coiled springs.

Lightweight and flexible shoes with no heels are used that offer support and shock absorption.

The routines of trampolining involve a series of acrobatic moves in the air supported by the contact with the trampoline bed. The skills feature rotations and jumps with three main body shapes- the tuck, pike and straight. Somersaults and twists are also performed with the take-off and landing in one of the four positions- feet, seat, front and back.