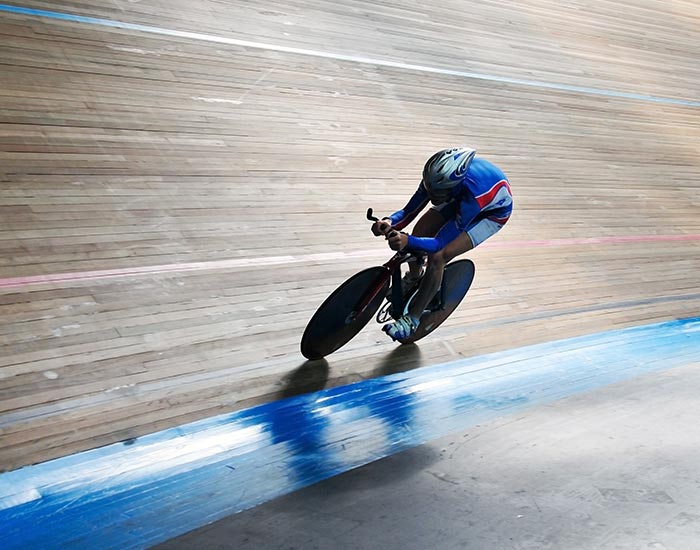 It is a bicycle racing sport that is usually held on tracks or velodromes that are purpose built for the sport to perform on it. Track cycling dates back to late 1800s when cycling was in its initial stage. The wooden indoor tracks were laid which were very similar to that of modern velodromes that consist of two straight and slightly banked turns. Track cycling has been a part of Olympic Games since 1896 whereas the women’s event was introduced in 1984. Union Cycliste Internationale (UCI) is the global governing body of the sport.

To cross the finish line faster than the opponent riders.

These races are between 8 and 10 laps in length and the riders focus on sprinting power and race techniques and tactics over a small number of laps to beat the opponent. Sprint riders train themselves specifically to compete in the races of this length and will not participate in in races of long endurance.

The events that fall in sprint are:-

These races are much longer in distance. The lengths of these races vary from 12-16 laps for individual or team pursuit races while they measure upto 120 laps for full length.

The endurance events are as follows:-

The riders participate individually or in teams as per the competition format. There are separate competitions for both male and female riders.

The track is known as the velodrome and is banked up and down with the center sections of the track having the highest slopes. The surface of a track cycling is made up of asphaltm, and the course itself consists of corners and straight sections. There are 333-meter, 400-meter, and 500-meter tracks, whereas the world standard size is 250 metres.

The thing of the utmost importance to be known by the rider is the direction of the track. The track cyclists always ride in the anti-clockwise direction, i.e. they have to take the turns always toward their left.

Go Up The Crash, Never Below It

Riders end up at the bottom of the track, so the safest place is to head up while the others are coming crashing down.

The black line is the lowest line and naturally the shortest track on the route. The area or the space between the red and the black lines is called the pole lane and during the 200m of the race if a person on the front has entered the pole lane, then he/she is not allowed to leave it. On the other hand the longest lane is the blue lane on the track. The riders in this lane should stay on or above the blue line and out of the course of the fastest riders.

If the rider gets a chance to pass the rider, he should paddle as hard as possible so as to overtake the other rider.

Never Pass On The Inside

This is one of the most important thing to notice that the rider should never pass on the inside i.e. the left hand side of the rider.

The track cycles do not have brakes in them and there is a purpose behind it. The rider will not lose momentum by breaking; neither will he be able to cause a pile up by braking and bringing all the riders behind him down.

The referee is the official to look after the following:-

To cross the finish line faster than the opponent riders.