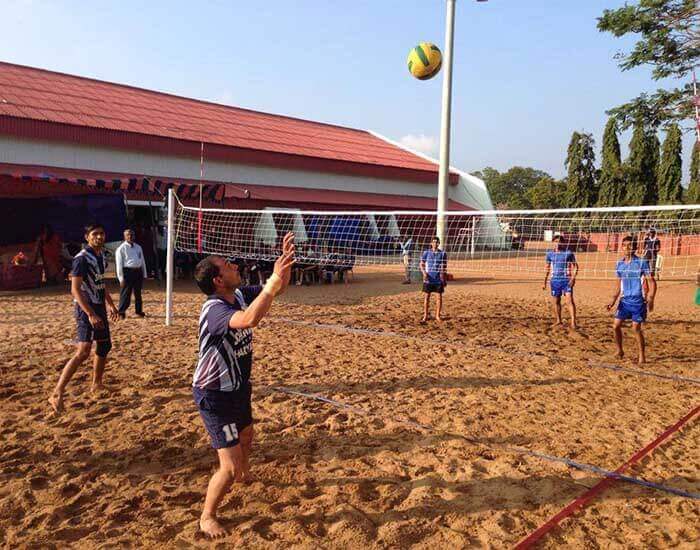 Throw ball is a popular non-contact team sport which is played by two teams. In this sport, each team comprises of seven players excluding 3-5 substitutions. Throw ball is much similar to volleyball. However, there are some fundamental differences in both the games. It is also popular in overseas hubs where there are sizeable Indian communities present. Just like volleyball, throw ball’s roots are linked with the Young Men Christian Association (YMCA).

On 18th August 2008 in Reina Beach, Saskatchewan (Canada), students of the University of Regina created a new game called the Ball Broke- Awesome! Ball, as a recreational sport. It was initially played on beaches, regardless of the number of players on either side. Later, it was designed to be a Beach Sport which was more irregular than basketball, requiring a few more athletic efforts. The first set of rules was written by Jamie D. Anderson, for a standard beach volleyball court. Later, these sets were implemented in Throw Ball.

In the first exhibition match of Throw Ball in 2008, an observer Travis Eftodie noticed the act of furious throws during the game which was played at the International Thunder Beach Training place and the game had its new name as Throw Ball. Travis Tokaruk slightly modified Throw Ball rules in his ninja training school. After this, the game successfully spread around the beaches.

It is strongly believed that the first ball used for throw ball was created by the Giant Tiger and brought for a Toonie in Regina Saskatchewan.

Throw Ball was extremely popular among women in England and Australia during the 1930s.

In 2008, an inter-faculty federation; Federation Inter-faculty de Thunder ball (FITB), was founded. They also organized the first World Throwball Championship in 2009 for the women’s teams and girly boys. Currently, the sport is widely popular in Brazil, Europe and in countries such as Italy and the Netherlands.

Throw ball was introduced in India by Jagat Singh Chauhan, an alumnus of the YMCA; where it was played as women's sport in the 1940s. By 1950s the game spread to other cities. Soon, Throw Ball Federation of India (TFI) was formed, and the first Indian National Throw Ball Championship was conducted in Haryana.

In 1990, a drastic change was seen in India, where both men and women were playing. The first set of rules for throw ball was formally composed by Harry Crowe Buck, a member of the YMCA. In December 2015, a Junior International Throw Ball match was conducted in Kuala Lumpur, Malaysia where a total of eight countries participated.

The main objective of the sport is to catch the ball without allowing it to bounce on the ground and throw it back immediately onto the opponent’s side of the court.

Men and women both participate in this sport but in different teams and compete against other men and women teams. Moreover, the teams are from different countries such as India, Sri Lanka, Bangladesh, Thailand, Malaysia, Nepal, Indonesia, Taiwan, Philippines, Pakistan, United Arab Emirates, Bhutan, Singapore and from thirty other countries.

Players need to wear loose shorts and a team jersey with the designated number on the back.

The ball is similar to volleyball but is slightly larger. The outer material of the ball is made from synthetic material that is hand sewn to give the player enhanced endurance levels even when used roughly.

Service is done within five seconds after the referee whistles and it is done from the service zone, without crossing the end line. A player can jump while serving the ball but the ball serviced must not touch the net. Double touch is not allowed while receiving the ball and the players stay in the playing area in the way shown below during the serve –

At this part of the game that is the rally, the player must catch the ball with both hands without any ball movements within the hands (dubs) and the player should not have any contact with the ball.

Throw ball is scored like volleyball and uses the rally scoring. That means the only team serving can score a point and does so when the opponent faults.

One team aims to defeat its opponent team by scoring more points in each set. Each set is comprised of 25 points and winning of any two sets will bring victory to the team. The players in throwball attempt to defeat their opponents by throwing the ball into the opposition's side, hoping that the other team will fail to return it, which will lead them to score a point. Scores are earned by a team if its respective opposing team fails to return the ball, its player touches the ball twice or the ball touches the net.