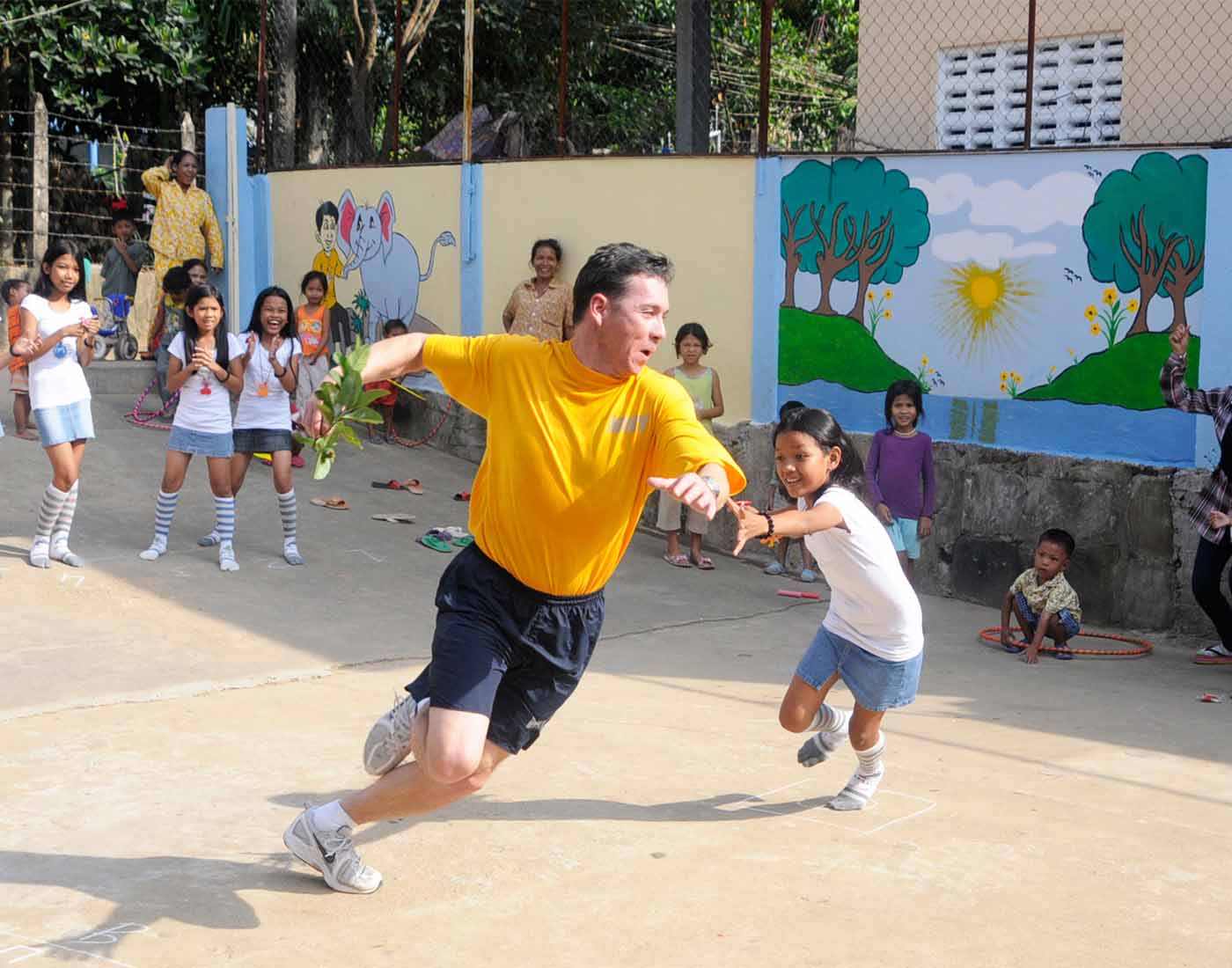 Tag is a popular game which is played globally. Children widely play it in school campus and parks. The name has arrived from the acronym of "Touch and Go". The player chases other players and touches them to signify a tag.

The game has various names in different regions such as in Romania, it is known as Leapsa, and in Modern Greece, it is known by the name kynigito.

It's widely regarded as tig, it, tips, chasey, etc. The sport requires various skills such as speedrunning, hiding, ditching and stalking.

The objective of the sport is relatively straightforward where the chaser is required to touch other players to make them out by tagging them. After tagging a person, the chaser or tagger (it) is required to say "Tag you are it!" and the last one who is tagged becomes the chaser (it) for the next round.

After a few successful tags, the original chaser gets the help of other tagged players to catch the remaining players. This may be done by linking each other's hand in a chain system to catch the rest of the participants.

The first record of the game was found in Ostrakinda written by a Greek writer known as Julius Pollux in the second century. Generally, two teams participate in this game. Both the teams are required to stand on a marked line either side before beginning the game. The game starts after a shell's spun on the ground or a toss in the air deciding which team will be the chaser.

In other versions, the chaser turns his/her back, and the rest of the participants follow a short distance by humming a chant or ask, "What's the time, Mr. Bear?"

After this session, the chaser can turn in suspense and shout any word or a phrase such as 'Dinner Time' and then try luck in catching the fellow participants.

In this variant, the chaser is blindfolded and designated as 'it'. Being in this state, they try to attempt tagging other players. This game is also regarded as Mr. Blind Man.,

In this variant, a vast chain of all tagged players along with the "it" join hands to catch the rest of the players. If a blob (chain) has 6 members in it, then it can split into smaller groups of 3 players. ,

It is also known as Army tag, Spotlight and German Spotlight. In this variant, the regular physical tagging of players is replaced by using flashlight's shining beam to tag other participants. ,

This ancient variant of Tag is played majorly in snowy and cold regions. One player referred to as the fox, begins the match from the centre of the spokes in a wheel whereas, other players regarded as the geese, wander around the spokes. Any participant who has been tagged by the fox becomes the fox. Although if any player stands at the spoke's intersection, then he/she can't be tagged as it is the safer zone. ,

In this variant, the chaser or "it" tags other players by hips and not hands.,

In this variant, all the participants are chasers or "it" and they can tag anyone in the ground. After being tugged, the tagged players are required to sit in the same position and can be free once the chaser itself gets tagged. ,

In this version of the game, the players avoid the "it" by stepping on another player's footprint.

This variant is completely similar to the regular tag game instead the chaser carries a sock filled with flour so that when it tags other players with the aid of the sock, it leaves a white mark and the tagged person is easily recognized. ,

This is a classic tag game where the players can save themselves by hugging other players. In this state, they can't be tagged, but two people can only hug for 5 seconds. ,

It's a similar sport to blind man's bluff, but in Marco Polo, it is played inside a swimming pool. The game is played via sound localization where the "it" player shouts 'Marco' at regular intervals responding to which the other players have to shout 'Polo' and the chaser guess and try to tag them. The tagged player eventually becomes the new "it" for the next round.

This is a reversible variant of regular Tag, where all the players try their best to tag the 'it' player. The other players tackle hard to get the ball so that they can strike the chaser and whosoever attacks the "it" last, becomes the next "it". This variant is popularized by various names such as 'muckle the man with the ball', 'kill the guy with a ball', 'smear the queer' as well as 'kill the carrier'. ,

The classic paintball is also a variant of tag game where the players use various compressed air guns specially designed with paintball markers and can shoot pellets filled with paint to tag other players. These games are highly popularized and are played with a set of strict safety rules in a commercial field. ,

The team tag sports are highly prevalent in South Asia and its neighbouring countries. The tag game is usually played between specific teams with specific rules. The popular variants of team tag game include Kabaddi and Kho-Kho.

The objective of the sport is relatively straightforward where the chaser is required to touch other players to make them out by tagging them. After tagging a person, the chaser or tagger (it) is required to say "Tag you are it!" and the last one who is tagged becomes the chaser (it) for the next round.

After a few successful tags, the original chaser gets the help of other tagged players to catch the remaining players. This may be done by linking each other's hand in a chain system to catch the rest of the participants.