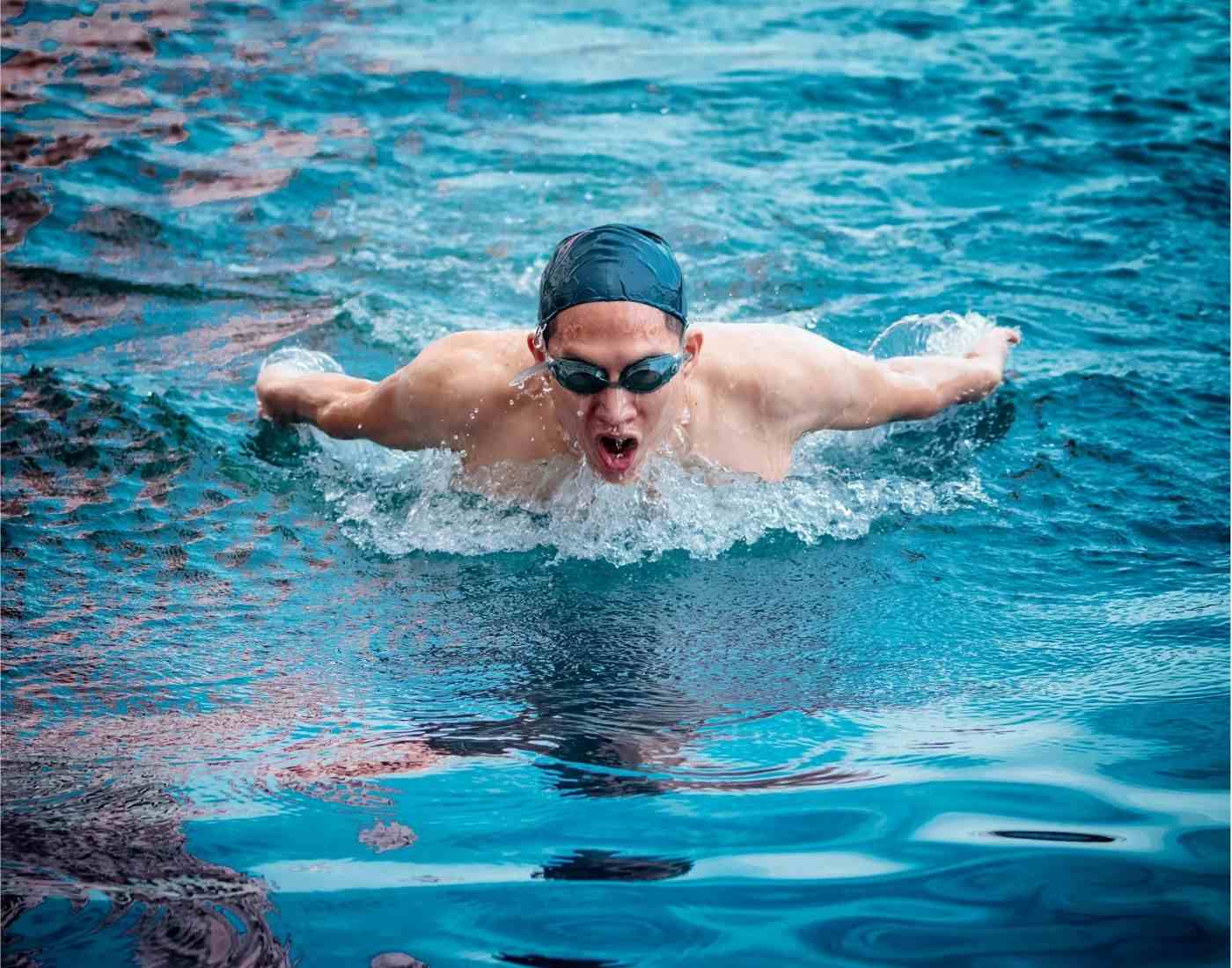 The term "swimming" refers to the propulsion of body through the water with the help of limbs to move in the desired direction. It is basically locomotion of creatures in water to survive, but amphibians also have an ability to go with this kind. Human uses swimming for many purposes such as exercise, sports and recreation. The medium can either be still or turbulent or moving with a velocity. It only depends upon the science of liquid. Ideally, a body with a relative density of 0.98 can float in water being less dense to it and a creature can move through it with the help of its limbs. The human body can’t float in water as its relative density is slightly less than that. Hence, it has to be in motion. Researchers have found swimming as one of the best exercises to keep human bodies healthy and active, healing numerous breathing issues and providing comfort to joints of bones. As sports, it offers many styles to perform skills and a healthy environment to compete individually as well as a team. In today’s world, it has been established as one of the widest streams of international sports containing many competitive courses. It was first started in Japan in 1603 as a race without any formal existence. In 1837, the sports association of London organized Swim Meets and conducted a championship over 440 yards in 1846 codifying some rules for it and the Association Metropolitan Swimming Club was founded in 1969. The Federation International de Natation Amateur (FINA) was founded in the same year with 10 nation members. Initially, swimming competitions were held in the sea but after some time, it switched over pools. The first races in three different strokes (backstroke, breaststroke and freestyle) were held only for men but in 1912, the races for women also started. The biggest competitions of swimming are Olympics and World Championships initiated in 1973.

Each swimmer has to compete in a race against the other competitor to swim the predefined distance in the minimum length of time.

Proof of recreational swimming in ancient occasions has been found, with the most reliable evidence dating to Stone Age artworks from around 10,000 years prior. Composed references date from 2000 BC, with probably the most reliable references to swimming including the Iliad, the Odyssey, the Bible, Beowulf, the Quran and others. In 1538, Nikolaus Wynmann, a Swiss educator of dialects, composed the first book about swimming – The Swimmer or A Dialog on the Art of Swimming.

Swimming rose as a competitive recreational movement during the 1830s in England. In 1828, the first indoor pool, St George's Baths was opened to the public. By 1837, the National Swimming Society was holding ordinary swimming rivalries in six artificial pools, worked around London. The recreational movement developed in prevalence, and by 1880, when the main national overseeing body, the Amateur Swimming Association was shaped, there was at that point more than 300 regional clubs in task over the country.

In 1844 two Native American members at a swimming game in London acquainted the front crawl with a European group of onlookers. Sir John Arthur Trudgen grabbed the hand-over stroke from some South American locals and effectively introduced the new stroke in 1873, winning a nearby challenge in England. His stroke is still viewed as the most dominant to utilise today.

Chief Matthew Webb was the first man to swim the English Channel (among England and France), in 1875. Utilising the breaststroke system, he swam the channel of 21.26 miles (34.21 km) in 21 hours and 45 minutes. His accomplishment was not recreated or outperformed for the following 36 years, until T.W. Burgess made the intersection in 1911.

Other European nations additionally formed swimming alliances; Germany in 1882, France in 1890 and Hungary in 1896. The main European amateur swimming games were in 1889 in Vienna. The world's first ladies' swimming title was held in Scotland in 1892.

Men's swimming turned out to be a piece of the Olympic Games in 1896 in Athens. In 1902, the Australian Richmond Cavill acquainted free-form with the Western world. In 1908, the world swimming affiliation, Fédération Internationale de Natation (FINA), was framed. Ladies' swimming was brought into the Olympics in 1912; the principal global swim meet for ladies outside the Olympics was the 1922 Women's Olympiad. The butterfly was created during the 1930s and was at first a variation of breaststroke until it was acknowledged as a different style in 1952.

The historical backdrop of competitive swimwear has been overwhelmed by worries over open bareness in the central portion of the twentieth century and by endeavours to lessen water haul in the second half. Those endeavours at first lead male swimmers to diminish the old hanging one-piece bathing suits down to briefs as it were.

With the improvement of new materials that firmly fit the body and offered lower resistance from water than human skin, this pattern was switched to a total body inclusion from heels to neck and wrists. In 1999, aggressive Australian swimmer Ian Thorpe marked with Adidas for an undisclosed six-figure total, to race in their new bodysuit, although the national group was supported and wore outfits structured by Speedo. Thorpe's achievement in the 2000 Summer Olympics wearing the Adidas full-length dark polyurethane bodysuit, rather than different swimmers wearing different swimwear (guys wore leg skins, jammers, or briefs, while females wore racerback maillots), prompted other swimming makers, for example, Speedo and Mizuno to make their adversary bodysuits. Thorpe along these lines worked with Adidas which in 2003 discharged the Adidas JETCONCEPT bodysuit, whose structure "originated from the V-formed depressions right now utilised on the wings and fuselage of common aircraft."

The LZR Pro and LZR Elite lines were propelled on 13 February 2008, with the LZR Elite being advertised as "the world's quickest swimsuit." It was the focal point of Speedo's crusade for the 2008 Summer Olympics, led by Michael Phelps of the United States. They made a holographic video of Phelps wearing the suit which was shown in London, Sydney, New York, and Tokyo upon the arrival of the suit's release. Speedo's LZR Racer had turned out to be so powerful by the eve of the 2008 Summer Olympics that numerous swimmers, regardless of them or their swimming leagues having elite contracts with other clothing creators, have picked the LZR Racer over contending bodysuits. At that year's Olympics in Beijing, 94% of every single swimming race was won in that suit, while swimmers wearing that suit won 98% of all medals, and swimmers contending in the LZR suit accomplished 23 out of the 25 world records broken. As of 24 August 2009, 93 world records had been broken by swimmers wearing an LZR Racer, and 33 of the initial 36 Olympic awards have been won wearing it.

In 2009, FINA guidelines and directions were modified, successful from 1 January 2010. Suits made with polyurethane were prohibited because they made competitors increasingly buoyant. These guidelines likewise restricted suits which go over the navel or underneath the knee for men and suits which stretch out past the shoulders or spread the neck for ladies. FINA expressed that it "wishes to review the primary and centre standard is that swimming is a game dependent on the physical execution of the athlete".

With the coming of elastic innovation, latex swimming caps wound up mass-delivered during the 1920s, and increasingly proficient silicone caps showed up during the 1970s.

sprinting means swimming intensely for a shorter period. Sprinter swimmer usually put maximum effort on the swim/speed and concentrate on managing their breath. They usually participate in 50, 100, and 200 metres races.

distance swimming means swimming faster and longer as to cover a long distance. Distance swimmers have high endurance since they swim for long periods and have to deal with greater strains on their muscles and body. While swimming in a race, they usually seek to maintain a high average speed and keep trying to relax while not entirely dropping theri speed. They often participate in 800 or 1500 meter races.

Middle distance swimmers do not decrease their speed as fast as a sprinter while swimming on a long swimming course. They also tend to have higher initial speed than long-distance swimmers. They usually give their optimum performance on a track which is not too long and ranges between 200 meters and 400 meters.

Each swimmer has to compete in a race against the other competitor to swim the predefined distance in the minimum length of time.