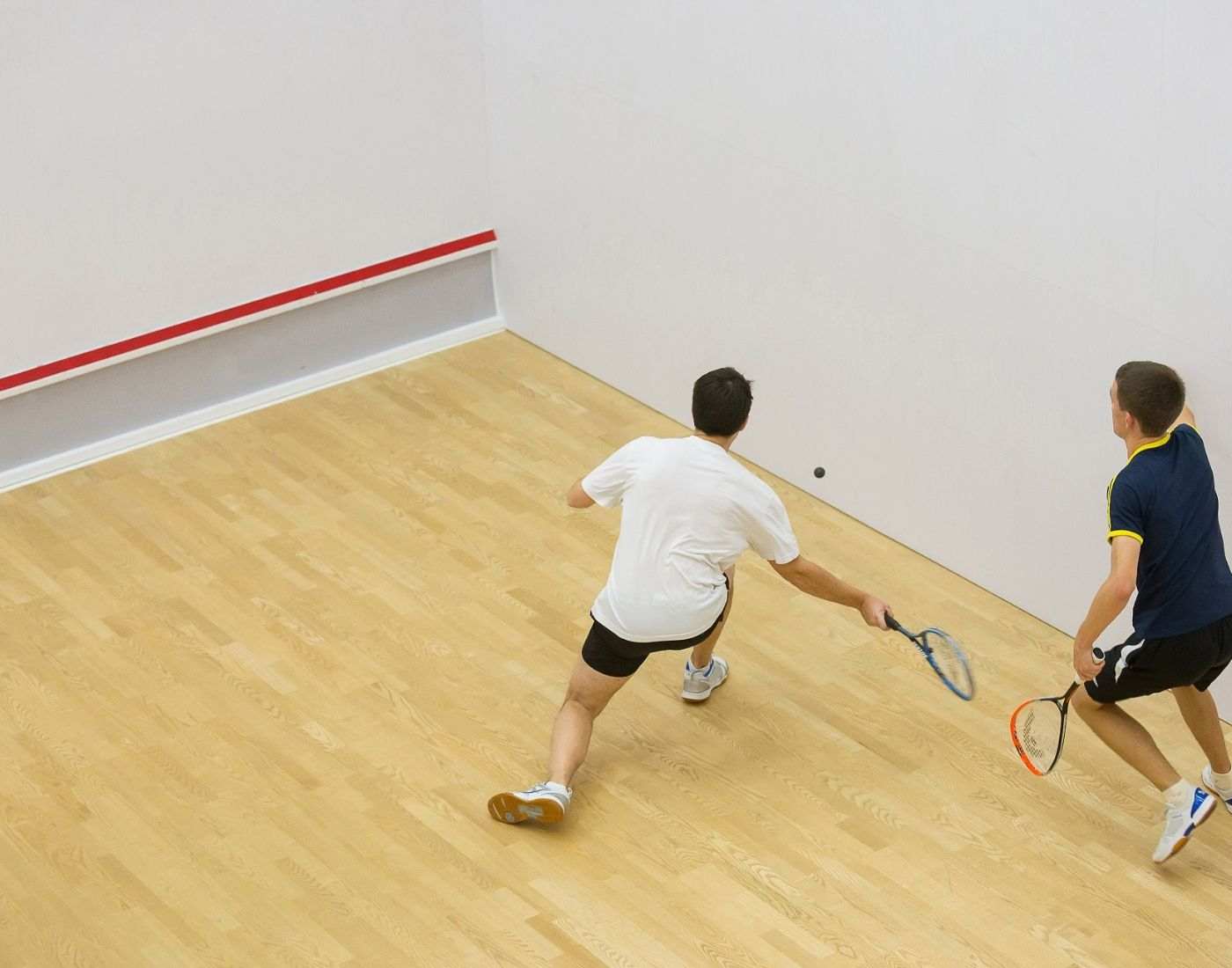 Squash is a racquet sport requiring stamina and is a sport of endurance & strategy. It is named so because of the small "squashable" hollow rubber balls used in the game. It is normally a game for two players, although doubles matches are also played on larger courts. Squash matches are the best of three or five games. A player wins a game by being the first to score either nine or 11 points depending on the scoring system (point or rally).

Opponents take turns to hit the ball which may touch the ground only once before each stroke. Squash was invented around 1830 in Harrow School in England after which the sport spread to other schools, and eventually became an international sport. The World Championships for men was first held in 1976, and the women's was inaugurated in 1979.

To hit the ball against the front wall above the tin & below the outline so the opponent can’t return it before the ball bounces on the floor twice.

Squash rackets is a relative of rackets, having most likely begun around the centre of the nineteenth century at Harrow School in England. Students there who were unfit to get into the rackets court took their activity hitting an India-rubber ball, which squashed when hit against a wall. The new amusement before long wound up prevalent in other English boarding schools. During the 1890s private courts were manufactured, and, after the turn of the century, club courts showed up at Bath, Queen's, and the Marylebone Cricket Club.

Not until after World War I did squash rackets caught on in terms of trend, and during the 1920s the amusement spread quickly, winding up more well known than its parent diversion, rackets. Numerous courts were built in clubs, schools, and universities. Tenets were detailed; the English national association was founded; and measurements of the court were built up, alongside guidelines as to the ball and racket. Numerous rivalries started: the Professional Championship in 1920, the Amateur Championship for men and women in 1922, and the Open Championship in 1930. International challenge/competition with the United States started with the sending of a British group to the United States in 1924, however, such games was later hampered by contrasts in British and American courts, balls, and techniques for scoring.

In the United States, the diversion played in the early years was squash tennis, utilising a lawn tennis ball and a tennis racket. Squash tennis has been superseded by squash rackets in most American urban areas however keeps on having a following.

From England, the diversion spread all through the British Empire—to Canada, India, Australia, and South Africa. Today squash is played all through the world. The World Squash Federation (WSF) advances the sport and directs tours and titles between countries. The WSF enrollment has developed to grow with more than 115 countries, every one of which likewise has a place with one of five regional squash leagues.

Remarkable squash players have included F.D. Amr Bey, an Egyptian amateur who won a few British open titles during the 1930s; the Khans of Pakistan, a group of expert players and instructors who regularly ruled open play from the 1950s to the 1990s; Janet Morgan, British ladies' victor from 1949– 50 to 1958– 59 and the champ of American and Australian titles; and Heather McKay (née Blundell), the Australian who won the British women's title from 1961– 62 to 1976– 77, just as different titles.

Squash is played by either two players (one player per side) or by four players as a game of doubles (two players per side).

Squash is played in an enclosed court which is a four walled playing surface that is 32 feet (9.75 m) long and 21 feet (6.4 m) wide for singles play & 25 feet (7.62 m) wide for doubles play. The surface contains a short line which is 18 feet (5.5 m) from the front wall and a half court line, separating the back portion of the court into two halves (left & right sides for opponents). Both the back left & right side portions contain smaller service boxes. The front wall has the largest playing surface and has three parallel lines marked on it, bottom line (top of 'tin'), service line (cutline) and outline.

A serve can be made forehand or backhand. It is the only time at which a player has total control over the shot.

Players try to dominate the ‘T’ (the point at which the half-court line & short line meet) as it is the best position in the court for returning the opponent’s next shot.

In this shot, the ball bounces very little that forces the opponent to run towards it & forces him to leave the 'T' position.

It is an attack shot that interrupts the rhythm of a rally, giving the opponent less time to prepare.

It is an offensive shot that goes over the opponent’s head, falls in the back corner of the court & does not bounce much.

It is a defensive shot that is played with pace against a side wall first to recover a ball played into the back corner.

Overall incharge of the match who decides all appeals, seated at the center of the back wall just above the out-line.

The second official with referee who calls the play, the score & the faults.

To hit the ball against the front wall above the tin & below the outline so the opponent can’t return it before the ball bounces on the floor twice.