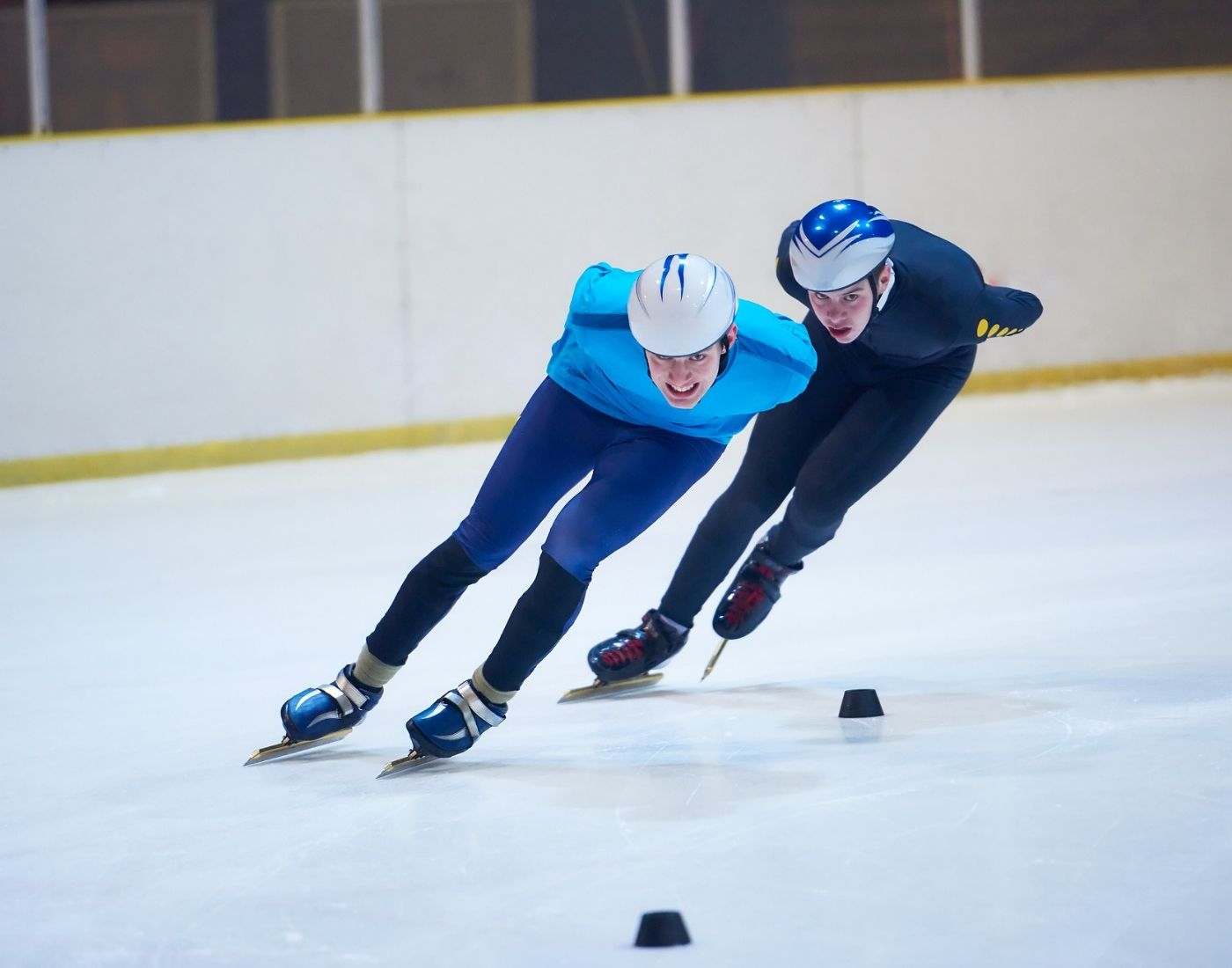 Speed skating is an ice sport in which the players wearing skates race on oval ice tracks. Speed skaters can attain a maximum speed of around 60km/h. The sport is also a part of winter Olympics since 1924. The idea of the sport was originated in Scandinavia and Netherlands where the natives attached bones to their shoes and used it to travel on frozen rivers, lakes and canals. In 1642, the first official skating club was born and in 1763, the first official speed skating race took place in England. The first World Speed Skating Championship was held in 1893 and takes place every year now.

To reach the finish line by skating in the fastest time possible.

Speed Skating started as a quick type of transportation crosswise over frozen lakes and streams. It is one of the most ancient kinds of sport on the planet and amid the nineteenth century it advanced in both Europe and North America into a cutting edge, aggressive game turning into the quickest non-mechanical game. Skaters can achieve speeds more than 50 km for every hour (31 miles for each hour) fueled just by their body and particularly their legs.

Speed Skating made its introduction on the Olympic program at the 1924 Winter Games. For quite a while, the Olympic Winter Games were the main event for Speed Skaters to pick up titles in the individual distances. Just since 1996 has there been the ISU World Single Distances Championships consistently, under the ISU banner. In 2005 the ISU presented the Team Pursuit and after ten years the Team Sprint. In 2011 the Mass Start was brought into the official competition and made its Olympic presentation at the 2018 PyeongChang Olympic Winter Games.

The Dutch were seemingly the most punctual pioneers of skating. They started utilising waterways to keep up the correspondence by skating from town to town as far back as the thirteenth century. Skating, in the end, spread over the channel to England, and soon the first clubs and artificial rinks started to shape. Energetic skaters incorporated a few rulers of England, Marie Antoinette, Napoleon III and German essayist Johann Wolfgang von Goethe.

The first known skating rivalry is thought to have been held in the Netherlands in 1676. Be that as it may, the first official Speed Skating occasions were not held until 1863 in Oslo, Norway. In 1889, the Netherlands facilitated the first World Championships, uniting Dutch, Russian, American and English groups.

It's a variant of speed skating which consists of a couple (traditionally a man and a woman) who dance on the ice while holding each other. Jumps and throws aren't allowed in this type of speed skating.

it's a more safe version of speed skating which is contested on a short track of 111 meters having more safety precautions like guards, etc.

It's a variant of speed skating which consists of competitions conducted on a 400 meters rink while using a significantly less amount of safety precautions as compared to short track speed racing. It's held for both men and women, but women are allowed to cover less distance.

Marathon event takes place on long tracks over long distances, around 40 km in indoor tracks and it can be around 200 km for outdoor/natural ice tracks.

Male and female skaters participate in various events of speed skating as individuals or teams.

A protective equipment worn by skaters to protect their shin bone from any injuries.

These are used to support the joints and to protect them from injuries.

Special cut-proof skating gloves made of leather are worn to reduce the risk of cuts.

The blade of the short-track skater is long and thin that is curved in the direction of the turns and is attached to the sole diagonally and off-center. Long-track skaters wear clap skates that have long, straight blades that are centered on the sole and hinged at the toe. The blade of the clap skate detaches from the heel of the boot which allows the blade to be in contact with the ice for a longer period.

Short track speed skaters wear skin-tight spandex bodysuits. At the national level, Kevlar suits are worn for protection against being injured from another skater’s blade.

Long track skaters also wear skin-tight bodysuits with a hood and loops for the thumbs to minimize drag.

During skating, skaters lean their body forward, bend the knees and usually swing their arms to maintain momentum. When passing through the corners, the skaters lean very low and often touch the ice with the inside hand.

Long track skaters also follow similar techniques and usually keep one arm behind their back to reduce drag while skating. Crossovers are also used by skaters that help them crossing the corners easily.

The two main types of speed skating (short track and long track formats) take place on oval ice tracks having different dimensions. Short track oval has a circumference of 111.12 m and the rink has at least 60 x 30 m dimension. Long track is a double-laned 400m oval having two curved ends each of 180 degrees. The inner curves of the long track have a radius of around 25-26 m and each lane have the width of 4 m.

The overall in charge of the competition who also decides all protests.

Assist the chief referee in taking all the decisions and make sure that lane changes are made legally.

Responsible for starting the race and for the start area. He/she calls the skaters to the starting lane and manages them until a valid start of the lap is done.

Makes sure that the skaters finish legally and determines the winner of the race or in case a tie occurs.

Responsible for keeping track of the time taken by each player to reach the finish line. There can be manual timekeeping or an automatic one.

Responsible for displaying the number of laps remaining (still to be skated).

Track judges include corner judges, crossing controllers and judges observing the finishing straight. All these authorities ensure that no rule infringement takes place on the track by the skaters and check the correctness of the skaters moving on the track.

To reach the finish line by skating in the fastest time possible.