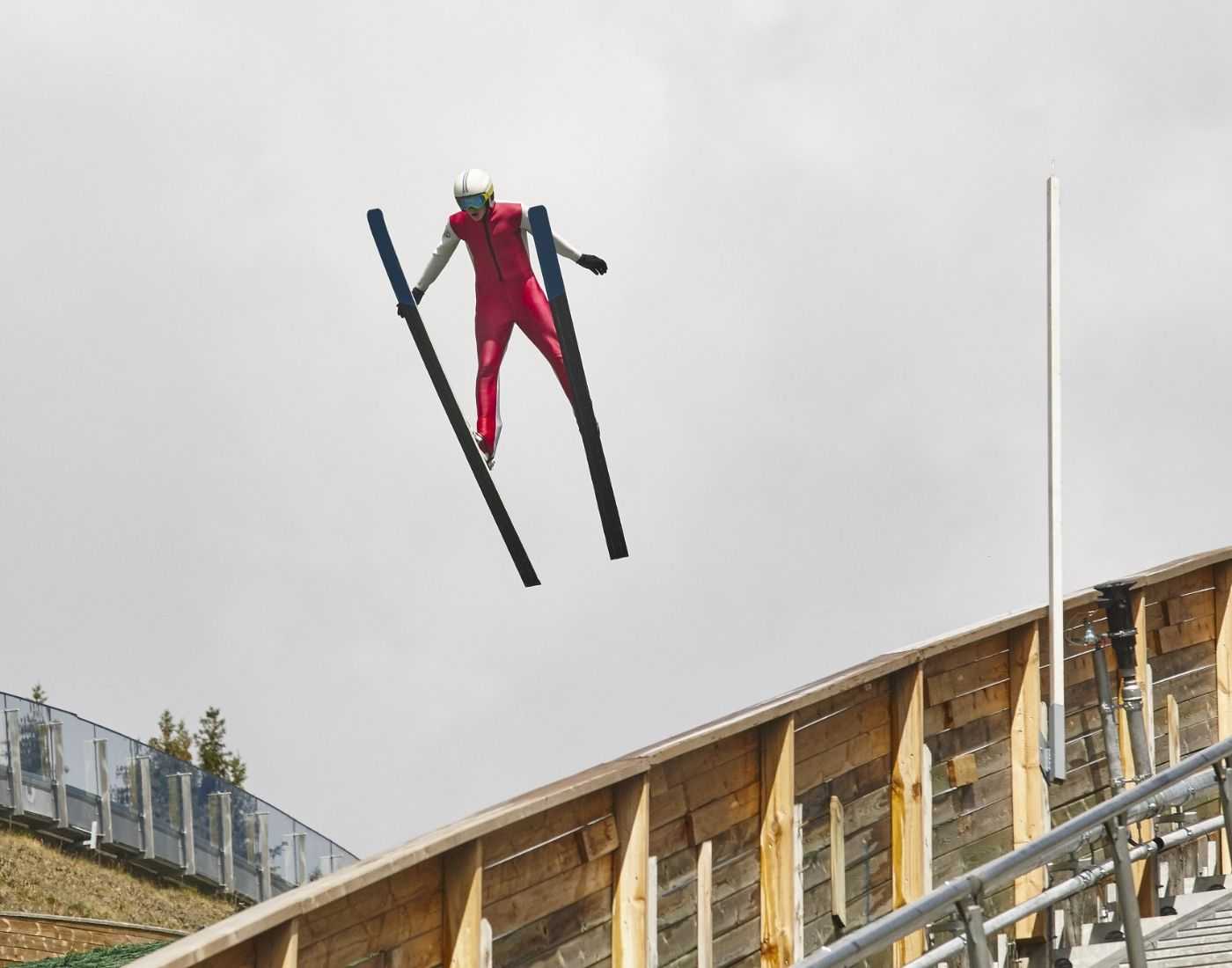 Ski jumping is a snow sport in which the skiers ski down a takeoff ramp, then jump from the end of it and fly as far as possible before landing near a calculation point marked at the hill. They are scored on the basis of the distance covered and the style used. The sport was originated (as recorded) in 1808 in Norway when a Danish-Norwegian lieutenant Olaf Rye launched himself on the skis and covered a distance of 9.5m in the air to show the courage to his fellow soldiers.

The first ever public competition of ski jumping took place at Norway on 22 January 1862. The sport is a part of winter Olympics since 1924 for men only and since 2014 for women also. The ski-jumping events can also be organized in summers on artificial surfaces made of plastic. The International Federation of the sport (FIS) was founded in 1924.

To get maximum points from the judges by covering a large distance in the air after jumping from the hill and landing near the K-point (calculation point) with a valid technique or style.

The beginning of ski jumping can be followed to Ole Rye who bounced 9.5m in 1808. Norwegian Sondre Norheim is generally viewed as the father of current ski jumping. In 1866 he won what has been portrayed as the world's first ski jumping competition with prizes, held at Ofte, Høydalsmo, Norway.

After World War I, Thulin Thams and Sigmund Ruud built up another jumping style known as the Kongsberger Technique. This included jumping with the chest area twisted at the hips, a wide forward lean, and with arms reached out at the front with the skis parallel to one another. Utilising this method, Sepp Bradl of Austria turned into the first to jump in excess of 100 meters when he bounced 101 meters in 1936.

In the mid-1950s, Swiss jumper Andreas Daescher turned into the first jumper to hold the arms in reverse near the body with an increasingly outrageous forward slender. At that point in 1985, Swedish jumper Jan Bokloev began spreading the tips of his skis into a "V" shape. At first derided, this system demonstrated was so effective that by 1992 every Olympic medallist were utilizing this style.

Ski jumping has been a piece of the Olympic Winter Games since the primary Games in Chamonix Mont-Blanc in 1924. The typical hill competitions was incorporated on the Olympic program for the 1964 Innsbruck Games. From 1988, the group/team occasion was included as a third challenge.

It consists of a competition on large (K120) hill only.

Male and female athletes compete as individuals or as teams in ski jumping competitions.

Form-fitting jumpsuits made of thin, foam-lined synthetic fabric are worn by skiers that reduce wind resistance and increase the length of the jumps.

Ski goggles are just like coconut shell – tough outside and soft inside. They protect the delicate eyes from harsh weather conditions and provide safety.

Flexible boots are used during ski jumping that allows movement at the ankles and enables a jumper to lean as far forward as possible during flights.

The device that connects/binds a ski boot to the ski is known as a binding. In ski jumping, the skier’s heel is not attached and can move up and down during flights.

The gloves used in these competitions are specially designed to give the athlete dexterity to handle the gears comfortably.

Skis made of wood and fiberglass is used in ski jumping that can be 240-270 cm long and 9-10 cm wide. Bindings are used to secure the skis with the boots. Skis have five to six grooves on the bottom to keep the skier straight on the inrun.

In this technique, the skiers spread the ski tips outwards making a 'V' shape with the skis. This technique exceeds the distance of the take-off hill by about 10% in comparison to the previous techniques used that were Kongsberger, Windisch and Dascher or parallel techniques. This technique was originated by Miroslaw Graf of Poland and was recognized as a valid technique in the 1990s.

This technique is a combination of the parallel and V-style techniques in which the skis are held parallel and wide apart in an 'H' shape.

Ski jumping competitions take place on snow-covered hills. It consists of an in-run (which is a specially constructed takeoff ramp) where the skier runs down before the jump, a landing slope and an out-run which may be flat or uphill which allows the skier to stop. The course consists of a construction point (K-point) where the skiers land and which is used for scoring the distance covered by the skiers.

Five judges are responsible for judging each jump independently from other judges and award points to the skiers. Up to 20 points may be awarded by each judge to the skier based on his style, balance, body position and landing.

To get maximum points from the judges by covering a large distance in the air after jumping from the hill and landing near the K-point (calculation point) with a valid technique or style.