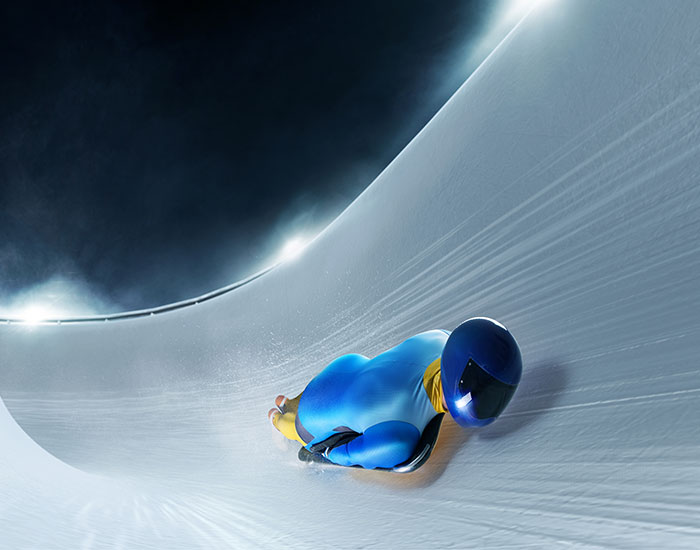 Skeleton is a sliding sport in which a rider rides a small sled on ice tracks by lying down on the sled keeping the head first. Skeleton is a part of the winter Olympic Games. The sport is said to be originated in 19th century in St. Moritz, Switzerland. In 1905, the first skeleton competition outside Switzerland took place in Styria, Austria. Until then, it was practiced mainly in Switzerland. It is believed that the sport was named so because of the appearance of the sled. The global governing body of Skeleton is International Bobsleigh and Skeleton Federation (Fédération Internationale de Bobsleigh et de Tobogganing (FIBT).

To win the race by reaching the finish line in the minimum time possible in a total of two/four runs as the racer with lowest aggregate time wins.

The game of skeleton sledging created on the renowned Cresta Run worked in 1884 at St. Moritz, Switzerland. The Cresta Run, which pursues a 1,213-meter (1,327-yard) course from St. Moritz to the town of Celerina, has facilitated the yearly Grand National titles since 1885. The 1887 Grand National saw the main rivals to lurch down the run headfirst. Another sledge made totally of steel was presented in 1892.

The sledge was well known with Cresta Run patrons, and some case that its "bony" appearance gave the sledge and the game the name "skeleton." Skeleton sledging was incorporated twice in the Olympic Winter Games, in 1928 and 1948, each time at St. Moritz, be that as it may, with the game restricted to be held only at the Cresta Run, it was outperformed in prevalence by bobsled and luge and fell into lack of popularity.

In any case, by the mid-1970s, changes in accordance with the skeleton sledge and artificial bob runs had been made, and the sport of skeleton was restored. By 1987 world championships and world cup championships had been set up, and the game was perceived by the Fédération Internationale de Bobsleigh et de Tobogganing (FIBT). Skeleton sledging came back to the Winter Olympics program in 2002, with occasions for both men and women.

The two types of events in Skeleton are -

Skeleton is an individual sport in which only single riders either men or women compete.

Skeleton gloves are made up of soft, thin leather for enhanced gripping. The grain and pores present in the gloves are added to amplify a unique feature to assist a firm grip while steering or pushing the sled. The gloves are soft and have a firm fitting. However, the fitting doesn’t interfere with the movement of hands.

Padded elbow guards are worn (optional) to protect the elbow from injuries during a fall or a strike.

Skeleton helmets are an essential piece of equipment. The helmets act as a safety guard for the head, neck and face.

The modern skeleton shoes are manufactured with synthetic materials. In each shoe, reflective markers are adjoined at the front and middle. While a skeleton run, the foot tends to bend.

The skeleton clothing or bodysuit has a streamlined look. This unrestrictive suit is also used in skiing, bobsleigh, and luge.

Skeleton is a bit dangerous yet adventurous sport. Participants are required to ride a sled with their faces down over an ice track. The sleds can attain a speed of up to 129 km (80 miles) per hour. The athletes usually lie down over a sled with their belly at the bottom and try to cover the entire track as fast as possible.

The skeleton racer pushes the sled at the start and runs as fast as possible by holding the sled handles for approximately 50m to reach a speed of over 40km/h. After this, the racer leaps up from the track by raising his legs into the air and then dives onto the sled with the head first, belly down and straight legs. For the more aerodynamic profile, the racer keeps his/her arms pulled in tightly against the side of the body.

Steering of the sled is done by leg and shoulder manipulations which help to change the sled direction. On the sled, racers can reach speeds up to 150km/h and can experience gravity of up to 5G.

Skeleton races take place on artificial ice tracks which are used for bobsledding and luge races as well. These tracks are constructed with reinforced concrete and covered with layers of ice and are artificially refrigerated to cool the track down before the competitions except the track in St. Moritz, Switzerland which is naturally refrigerated. The artificial tracks are specially created with curved banks and sidewalls. These tracks are very smooth. Tracks with high banked curves offer speed around 120-145 km/h.

Ensures the smooth running of the competition and keeps updating the jury about the track.

4-6 members form a jury who ensures smooth operation of the start and end zones and are responsible for monitoring the temperature of the runners at the start (which can’t be more than 4 degree Celsius than reference runner) and the weight of the sled and racers at the end of the race. Jury members report to the chairperson.

Ensures that the rules are followed, makes all major decisions regarding the weather conditions and handles all issues related to the competitions.

Responsible for timing the racers with the help of a computer which records the information transmitted by the photoelectric cells installed along the track.

Inspects the equipment and facilities at the starting line.

To win the race by reaching the finish line in the minimum time possible in a total of two/four runs as the racer with lowest aggregate time wins.