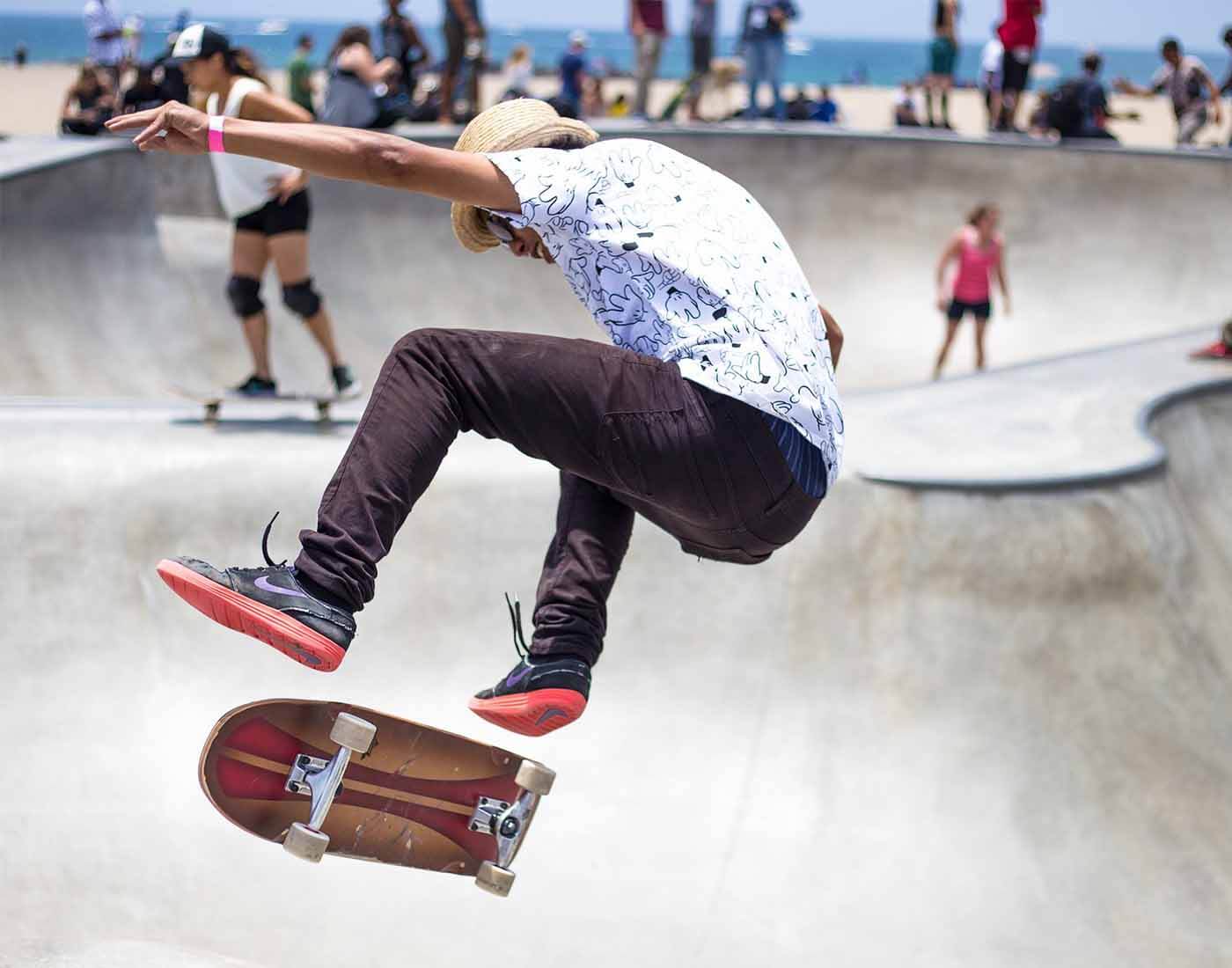 Skateboarding is a popular adventurous sport in which the rider balances and performs tricks on a skateboard. A skateboard is a flat, narrow board with rollers attached at the bottom. The sport is based on riding on the board and performing various series of tricks including jumps, flips and mid-air spins.

According to a report of 2009, the skateboarding market is worth an approximate value of $4.8 billion in one year with total revenue of $11.08 million among the active skateboarders in the world.

The objective of skateboarding is to perform the most advanced and complicated tricks on the platform without losing their balance. The riders need to complete the route without any support and avoid touching the ground too.

Riders compete on different lanes reserved for them where they are also required to swap their respective paths to ensure that all the participants cover the same amount of distance in comparison to one another. Riders adopt a particular set of techniques to improve the chances of reaching the finish line first.

The skateboarding had its initial marks in the 1950s in California, when the surfers created the idea of surfing in the streets. The first skateboarding started with wooden boxes or boards with roller skate wheels fixed at the bottom. But, this was dangerous as the riders get insanely injured with the boards. The boxes turned into planks, and eventually, due to enormous demands, the companies started producing decks of pressed layers of wood.

During the 1960s, skateboarding gained the most popularity, and companies like Jack’s, Hobie and Makaha started organizing the skateboarding competitions. In the spring of 1977, the sport took an evolutionary change towards a more formal side with changed rules and setup that we witness today.

Alan Gelfand invented the new style of skateboarding which eventually went popular for vert ramps. His skateboarding tactics were unique as he used to slam his board with his back foot down on the tail and then make a successful jump, thereby popping himself into the air. This gave birth to Ollie a trick that completely revolutionized skateboarding. By the late 1970s, public skate parks were built for the enthusiasts.

By the year 1980, the skateboarders started building their ramps at home and so that they could skate whenever they wanted.

By the early 90s, skateboarding spread its roots to the street where its popularity was waxed and waned with punk music and rough choreography. In 1995, ESPN hosted the first-ever Extreme Games in the Rhode Island. The X Games became an instant hit. Also, they helped to put the skateboarding championships closer to the official mainstream platform and being accepted by the general population.

In the year 2003, Go Skateboarding Day was celebrated in Southern California by the International Association of Skateboard Companies. June 21 is celebrated every year to define skateboarding as a creative sport. In 2009, the Skateboarding Hall of Fame & Skateboard Museum was opened by the Skatelab. In 2010, electric skateboards started getting a place in the market. It also included self-balancing unicycle format in a board format. The skateboarding competitions in the Olympics will take place in two different disciplines: Street boarding and Park boarding.

It’s the oldest style of skateboarding which was introduced as a mode of transport in the 1960s. The professional freestyle competitions involve music and choreography with technical skills. ,

It involves skateboard riders to move from the horizontal lane (on the ground) to the vertical lane (on a ramp or other incline) by performing various tricks. It is also referred to as Transition Skateboarding or Tranny Skating. Skateboarders usually set up their boards with 55 mm wheels and wider decks for more stability.,

Street skateboarding also involves the use of urban obstacles (furnishing products) like stairs, their handrails, planter boxes, drainage ditches etc. Skaters perform their respective tricks with the involvement of the obstacles placed. The skateboarders usually set up their boards with 55mm or smaller wheel and narrower decks to make the board flip faster and making it easier to perform. ,

It’s a variant of skateboarding which is done with any type of skateboard where the riders travel as fast as possible on the ramps and skate through skate parks or general urban localities without any tricks. They board for as long as possible with high speed without even stopping or touching the surfaces.,

The park skateboarding encompasses a variety of sub-styles adopted by the riders in a purpose-built skate park. The skate parks usually comprise of half-pipes and quarter-pipes. It includes integration of vert skateboarding styles along with street skateboarding obstacles such as stairs and rails.

The objective of skateboarding is to perform the most advanced and complicated tricks on the platform without losing their balance. The riders need to complete the route without any support and avoid touching the ground too.

Riders compete on different lanes reserved for them where they are also required to swap their respective paths to ensure that all the participants cover the same amount of distance in comparison to one another. Riders adopt a particular set of techniques to improve the chances of reaching the finish line first.