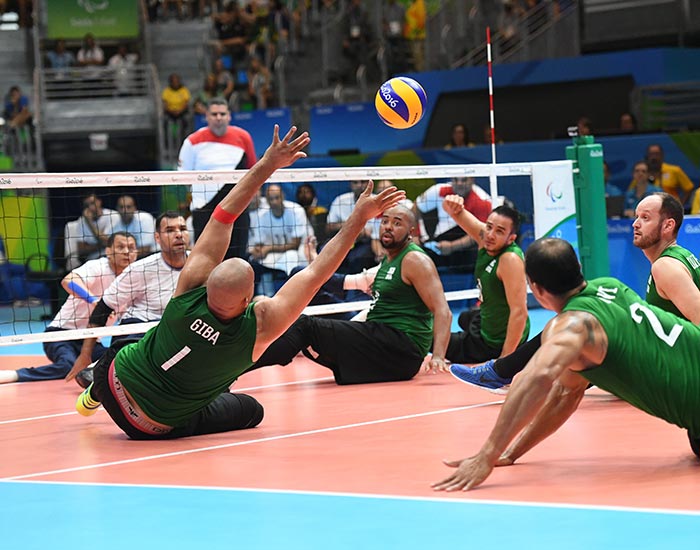 Sitting Volleyball is an adaptation of volleyball for athletes with disabilities. It is a sport played between two teams of six players each on a smaller volleyball court and lowered nets that’s why the game is considered to be faster than standing volleyball. During the game, athletes are required to maintain contact between their pelvis and the ground at all times. In the game, blocking the serve is also allowed. Paralympic volleyball made its debut at the Summer Paralympics in 1976.

That year, the standing form of volleyball was contested. Sitting volleyball was first introduced at the 1980 Games for men only. The women’s event became a part of the competition in 2004. Standing volleyball was last contested at the Paralympics in 2000. Since 1993, Sitting Volleyball Championships for men and women have regularly been organized.

In 1956, the Dutch Sports Committee presented another amusement called Sitting Volleyball, a blend of sitzball and volleyball. From that point forward Sitting Volleyball has developed into one of the greatest games rehearsed in the competition by the disabled in the Netherlands yet in addition by intrigued "capable/abled" volleyball players with damage of the lower leg or knee.

At that point in 1978, the ISOD acknowledged sitting volleyball in its projects. The first official tournament occurred in 1979 in Haarlem, Netherlands, and after that in 1980 sitting volleyball was acknowledged as a Paralympic sport with seven players. Since 1993, Sitting Volleyball titles have been organised for people. The ladies' sitting volleyball occasion presentation followed in 2004. It has turned out to be one of the primary group activities in the Paralympic Program. It is a quick, energising and group satisfying game, which can demonstrate the athletic aptitudes of handicapped athletes/ladies.

Two teams of six players each compete against each other. Each team may consist of two players with minimal impairments (like missing fingers or anterior cruciate ligament damage).

Sitting volleyball, unlike volleyball for able-bodied players, is played from a lower net. It is 0.8 m wide set at 1.15 m high for men and 1.05 m for women.

The playing area of sitting volleyball includes a rectangular court measuring 10 x 6 m and is divided into equal halves by a net measuring 0.8m wide and 1.15m high for men and 1.05m high for women. The halves are further divided into two halves (the front row and the back row) by the attack line on both sides of the net (2m from the net).

There are two referees present during a volleyball match. The first referee is the incharge of the match who has final authority over all decisions. The second referee is responsible for signaling faults, violations and authorizes game interruptions, substitutions and timeouts.

Records the details of the libero replacements, operates the manual scoreboard, starts and ends the timing of technical time-outs.

Usually two or four line judges check for any line faults including the buttock faults of the server.