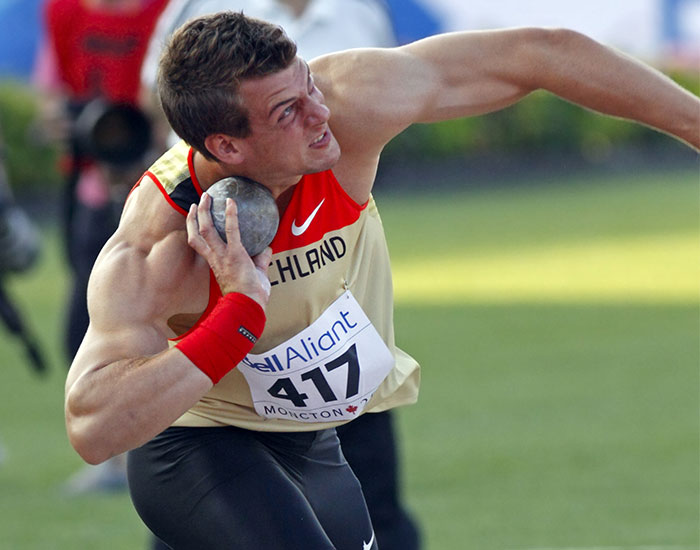 Shot put is an Athletic Field Event in which athletes compete by throwing (putting) a heavy spherical metal ball (shot) as far as possible. Each competitor is allowed to make three attempts. After which the best of the three is taken in to consideration and whoever puts the shot farthest is declared a winner.

The first competitions resembling the modern shot put had occurred in the middle ages in which soldiers used cannon balls during the events. Moreover, during the 19th century, the first recorded event took place in Scotland where athletes used a rounded cube, stone or metal weight to throw it from behind a line. The Shot put sport is a part of Summer Olympics since its inception in 1896 for men and for women in 1948.

To put (throw) the shot (a heavy metal ball) as far as possible from a seven feet diameter circle.

It is a circle of 2.14 m (7 feet) in diameter into a 34.92° sector as measured from the center of the circle. Usually this is made on the ground for outdoor shot put competitions and for indoor competitions the ring is made of high-resistance multi- layer plywood on a metal surface that makes it stiff and strengthens the components. In 1908, the throwing area was changed from a square to a circle. In the following year, a stop board was added to give shot putters a point of support for their foot.

The Shot put Shoes are made of leather or suede with smooth and flexible soles. Cleats are not present over the outer sole to provide maximum adherence to the athlete on the surface of the throwing circle.

This technique was invented by Parry O’Brien from United States in 1952. This technique not only gave him an extra quarter-turn but also increased his propulsion and improved his performance by about 1 meter.

Step 1: The athlete needs to be relaxed while all of his body weight is on his leading leg (that is slightly in front of other) with the strongest arm (depends on the player whether left-handed or right-handed) holding the shot put on the side of the neck under the chin.

Step 2: The athlete has to lift its supporting leg behind the leading leg knee with the supporting arm in front of the chest.

Step 3: Now, the athlete stretches out the supporting leg while pushing off the leading leg with the hips in rotation.

Step 4: The last and important step is that the athlete locks its leg while facing the landing area (target) and pushes the ball / shot powerfully engaging the shoulder and chest muscles. The sudden extension of the putting arm propels the shot.

This technique was first used by Aleksandr Baryshnikov in 1972 and was invented by his coach Viktor Alexeyev. It involves a spin just like discus throw with the help of rotational momentum for power.

Step 1: In this technique the athlete stands side on to the marker, while bringing the supporting arm across body and bends the back knee sideways.

Step 2: The leading arm rotates around the body as the free arm is straight with the back leg leaning further to get the maximal power.

Step 3: As the hips thrust forward with the shot put touching the neck meanwhile the arm swings round to get prepared to push the shot put.

Step 4: Now, push the shot put forward, using legs and shoulder power while landing over the previously bent leg with arms and body in rotation.

Note: If the delivery does not take place properly, the energy resulting from the spin can carry the athlete outside the circle. The attempt is a foul if the athlete touches the top of the stop board or leaves the circle before the shot touches the ground.

The shot put playing area includes a stop/toe board, a throwing circle and a landing area for the shot. The throw takes place from inside a circle which is 7 feet (2.14 m) in diameter with a white-colored curved toe-board of around 4 inches (10 cm) in height which is positioned at the front of the circle. The landing area is a sector that fans out at 34.92 degrees from the center of the throwing circle and must not be more than 30 m long. The shot thrown weighs around 7.26 kg for men and 4 kg for women.

In International competition, at least two judges record the attempts and verify the results at the end of each round. Shot put is scored based on distance. The distance is nothing but the length measured from the inside of the toe/stop board of the circle all the way to the very first mark where the shot landed on the ground. A white flag indicates that the throw is good.  A red flag means that it was a foul throw for the following reasons: (a) If the throw is out of the landing area (b) if the athlete leaves the throwing circle before the shot lands (c) if the athlete’s foot touches the top of the stop board. 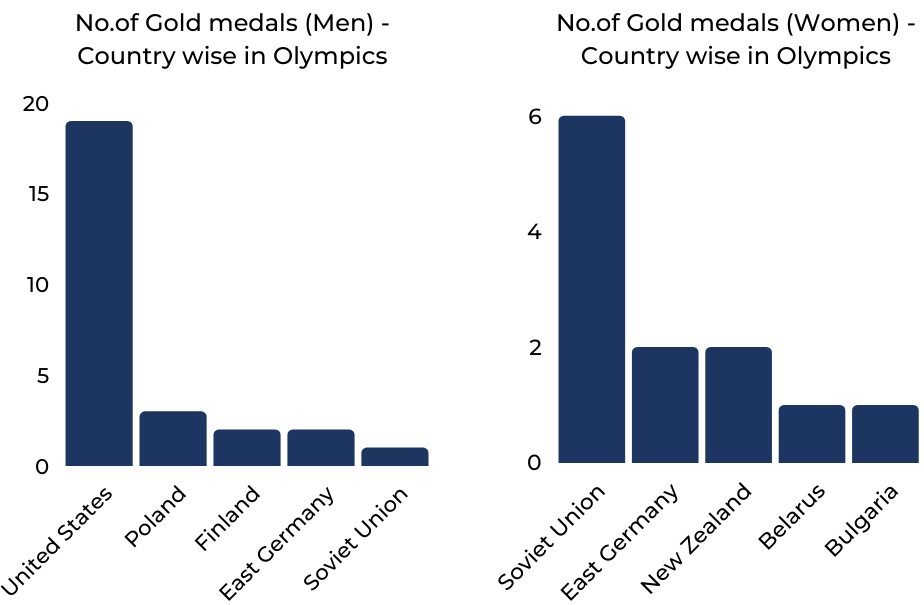