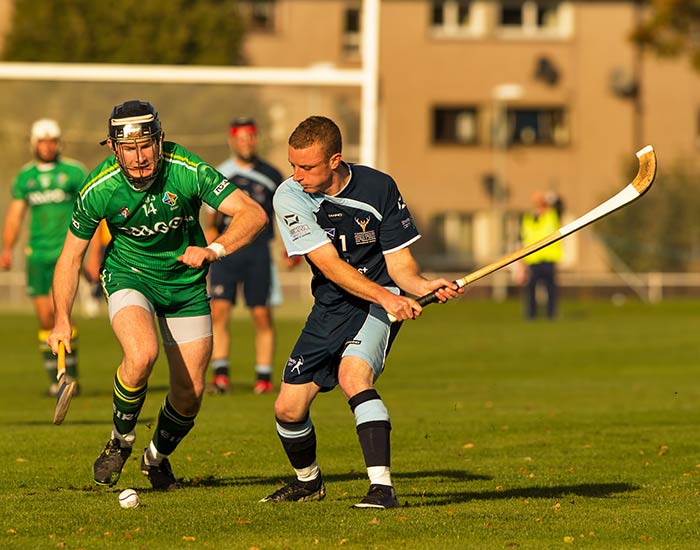 The roots of the name shinty are questionable. There is a hypothesis that the name was gotten from the cries utilised in the amusement; shin ye, shin you and shin t'ye, other tongue names were shinnins, shinnack and shinnup, or as Hugh Dan MacLennan proposes from the Scottish Gaelic sìnteag. However, there was never one sweeping name for the diversion, as it held distinctive names from glen to glen, including cluich-bhall (play-ball in English) and in the Scottish Lowlands, where it was once in the past alluded to as Hailes, normal/cammon (caman), cammock (from Scottish Gaelic camag), knotty and different names, just as the terms still used to allude to it in present-day Gaelic, camanachd or iomain.

Shinty was at one time a well-known diversion in swamp Scotland, as appeared by its name Shintie, a term which took that structure around 1700, uprooting the prior Shinnie - of which there is a composed record around 100 years sooner. Shinnie may likewise get from "shin" in English, with the suffix"ie", a typical end to the name of numerous diversions in Scotland.

The two types of events that take place are for -

Two teams of twelve players (men) or ten players (women) each including the goalkeeper compete against each other to win the match. Maximum three substitutions are allowed per game.

It is a metal crossbar through which a net is attached.The goal is said to be scored when the ball passes through the goalpost.

The shinty ball consists of a cork core covered with two pieces of leather that are stitched together. These balls have a circumference of around 7.5-8 inches and weigh between 2.5-3 ounces.

The wooden stick used to play shinty is called Caman which is usually around 3.5 ft long with a wedge shaped head which must be able to pass through a ring having a diameter of 2.5 inches.

It is a protective gear worn by the players to protect their shin bone from any injury caused by hitting of the ball or any other object. These are not compulsory to wear.

Plastic helmets with or without chin guards are used for protection against injuries.

Studded or cleated shoes are worn by players to have a good grip on the surface. These shoes sometimes have an extra padding on the toes and insteps to help kick the ball.

Shinty players wear T-shirts and shorts made of synthetic material. The goalkeeper wears a different colored T-shirt from the rest of the team.

Shinty is played on a rectangular field which is 128-155m long and 64-73m wide. The field is marked with distinctive lines, the long edge being called the sideline and the short edge is called the byelines. The corners of the field are marked with quarter circles of 1.8m radius and a flag is placed at each corner. A center spot is marked at the center of the field surrounded by a circle of 5m radius.

The goals are placed at the center of each byeline measure 10 feet high and 12 feet wide. A 10-yard area is marked around each goal and a penalty spot which is a semi-circle of 5m radius is marked at each end of the field, 18m from the mid-point of the goal line.

In shinty, unlike other similar sports, players may use both sides of the caman to hit the ball and are allowed to play the ball in the air. But only the goalkeeper is allowed to use his hands to control or stop the ball.

Referee is the overall controller of the match and enforces the rules of play and is assisted by goal judges and linesmen.

Two goal judges observe goal scoring and indicate when the ball is out of play over the bye-line, indicates whether a corner or bye-hit should be awarded and when an attacker is off-side.

Four linesmen each present at one half of a sideline indicate when the ball is out of play, when it crosses the sideline and which side is entitled to the hit-in.