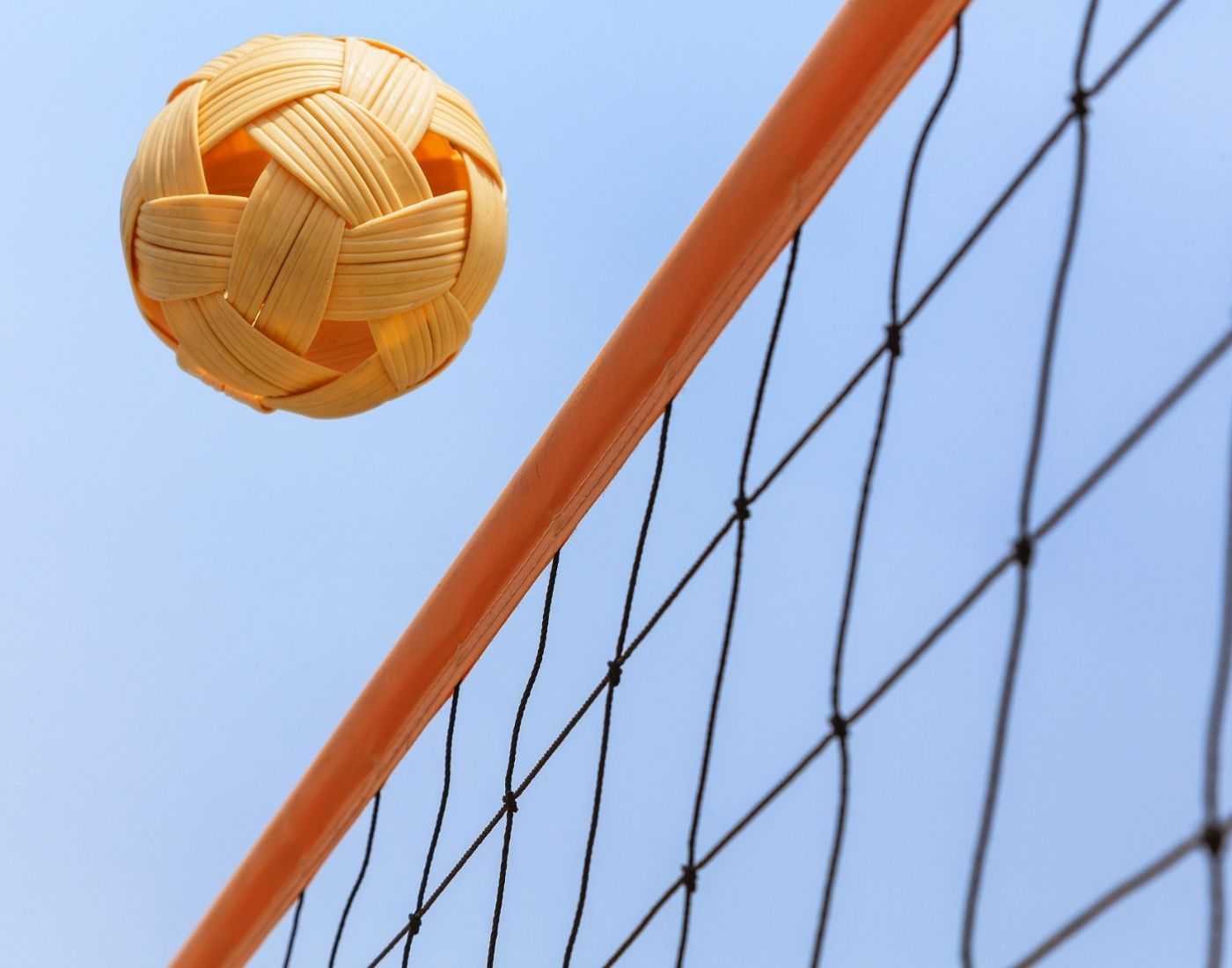 Sepak Takraw or Sepaktakraw is also known as the ‘Kick Volleyball’. It is a team sport that is commonly played among teams of two to four players on a court resembling a badminton court. It is a combination of volleyball and footvolley as the players play this sport using only their feet, knees, shoulders, chest and head to touch the ball. When someone observes the sport for the first time it appears to be a combination of volley ball (due to the presence of net) and soccer / football (as players use their feet).

Sepak Takraw is governed internationally by the International Sepaktakraw Federation (“ISTAF”) formed in 1988 that also conducts tournaments worldwide. Sepak Takraw is known by different names in different regions. It is known as Sepak Raga in Brunei, Indonesia, Malaysia and Singapore; Rago and Raga in Indonesia; Sipa in the Philippines; Chinlone in Myanmar; Takraw in Thailand; Kataw in Laos; Sek Dai in Cambodia; Cuju in China; Da Cau in Vietnam; Jegichagi in Korea and Kemari in Japan.

The word ‘Sepak’ is of Malay origin used for ‘kick’ while the word ‘takraw’ is of Thai origin that means ‘muzzle’ or ‘woven rattan ball’. Overall, the name is known as Sepak Takraw which means “to kick a rattan ball”. This name was finalized after a meet in Kuala Lumpur in 1960 between Malaysia and Thailand.

Moreover, in the past it was known as “Sepak Raga Jaring” in Malaysia, in which the term ‘Jaring’ meant ‘net’ in Malay that was added to the traditional “Sepak Raga” game by Hamid Mydin (recognized as the creator and founder of Sepak Takraw) in Penang in 1945.

Sepak was originated in Malaysia about 500 years ago. It was mostly played by the royal court in the 15th century. The game spread across Indonesia, where it got popularized amongst people in the name of Sepak Raga around 16th century. Later on, by 1940 the sport spread across Southeast Asia and the formation of official rules and regulations took place.

The first official Sepak Takraw competition was held at a swim club in the year 1945 in Penang. The teams which took part in the competition belonged to the various villages of Penang. During this period, the game was known by the name “Sepak Raga Jaring”.

The Malaysian Sepak Raga Federation was founded in 1960 at Penang and later in 1965 it was included in South East Asia Peninsular Games. It was only after this that the sport was named officially as Sepak Takraw.

The main objective of the game is to kick the ball to the other side of the net but within the boundary of the opponent’s team. One of the teams has to score more points by causing their opponents to commit a fault to win the game.

Sepak Takraw is a popular sport in Southeast Asian countries and is slowly spreading towards other parts of the world including the European and American countries. The countries that take part actively in the tournaments are from Malaysia, Thailand, Indonesia, Korea, Japan, India, Philippines, Brunei, USA and Pakistan.

The equipment used in Sepak Takraw consists of net and the rattan ball. Apart from these two; the other equipment used are the shoes and the protective gears.

It is spherical in shape and is commonly made of synthetic fiber. Initially these were made of rattan strips which have been replaced by the synthetic fiber. The type of material and method used for construction of ball must match the ISTAF criteria.

Specifications of the ball:

The net used in the game is commonly made of fine cord or nylon with six to eight centimeter mesh. It resembles volleyball net.

The shoes worn in this game are light in weight and have flat soles. It has a good grip on both indoor and outdoor surfaces and the insole makes it comfortable to wear.

These are ankle supportive bands that are used by players for providing protection to the joints and they also use forehead bandanas in order to stop the sweat from getting into the eyes.

The Sepak Takraw playing court is quite similar to the volleyball court with a flat, uniform and horizontal surface. The dimension of the court is similar to that of doubles badminton. 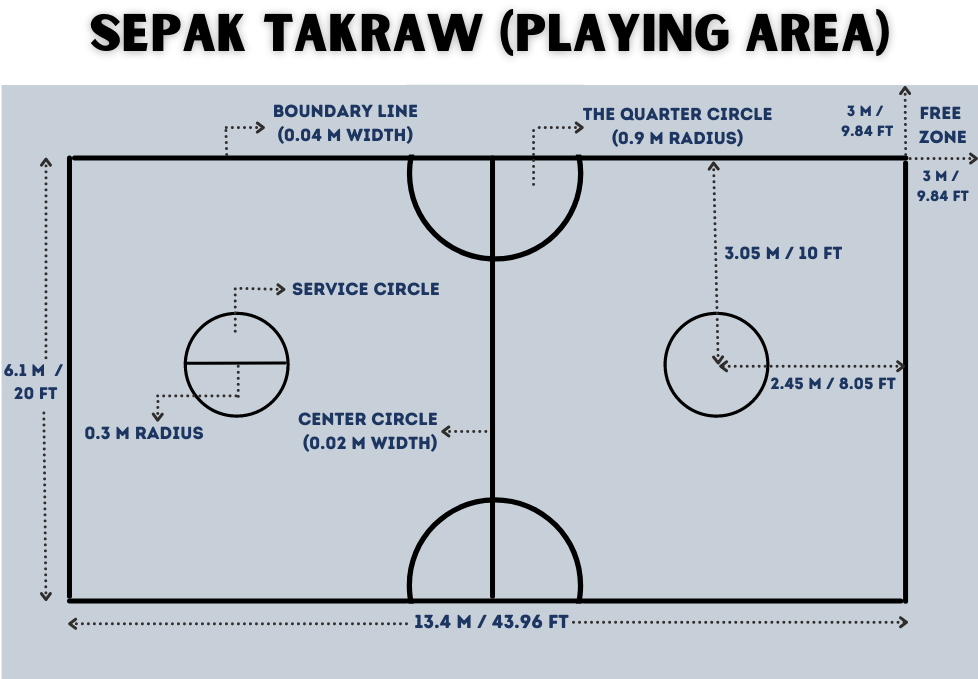 1) Regu- Three players in each team.

The main job of the server or Tekong is to serve the ball. The server usually hits the ball across the net with great speed making it difficult for the opponent players to defend.

The striker or killer is the main person to execute the volleys in to opponent side with high speed. When the striker does not possess the ball, he usually tries to block high kicks from the opponent side.

The third player is the feeder who has the maximum control over the ball during the match. The main job of the feeder is to set the ball in a suitable way for the striker to kick hard such that it passes through the net.

Usually the Server stands in the back whereas the striker and the feeder take the front left side and the front right side.

This game is full of quickness and agility and requires good precision for different shots based on the situation and as per the player requirements.  The player as a striker plays offensive shots where as a feeder defends the shot first in order to set it for the striker.

Shots played by players are:

An inside kick is the most basic form of kick that is used to control the ball. In this shot, the players have to stand with their feet apart and then by bending the supporting leg a little, they need to hit the ball in upward direction using the inside of the other leg.

An outside kick is used as a defensive shot and is played while defending a serve from the opponent side. During this shot the players try to raise the knee as high as possible.

This shot is quite similar to the Horse Kick Serve. The only difference is that the shot is performed with a jump. In this shot, the player has to jump on one of the leg while using the other to hit the ball.

One of the toughest and most stylish shot where the player kicks the ball in backward direction over his shoulders or head before finishing the kick and touching the ground.

An official Regu and Doubles Regu match usually comprises of three sets of game with each set having 21 points. In case of a team event, three back to back matches are played using different players for each Regu.

The winner is declared by the best of three sets. Once a set is over, the teams change their side and the team which lost the previous set serves first.

If any of the team does not win two back to back matches, the third match that is also called the tie-breaker match has only fifteen points. Before a tie-breaker match takes place again a coin is tossed by the referee and the winner of the toss chooses to either serve or defend.