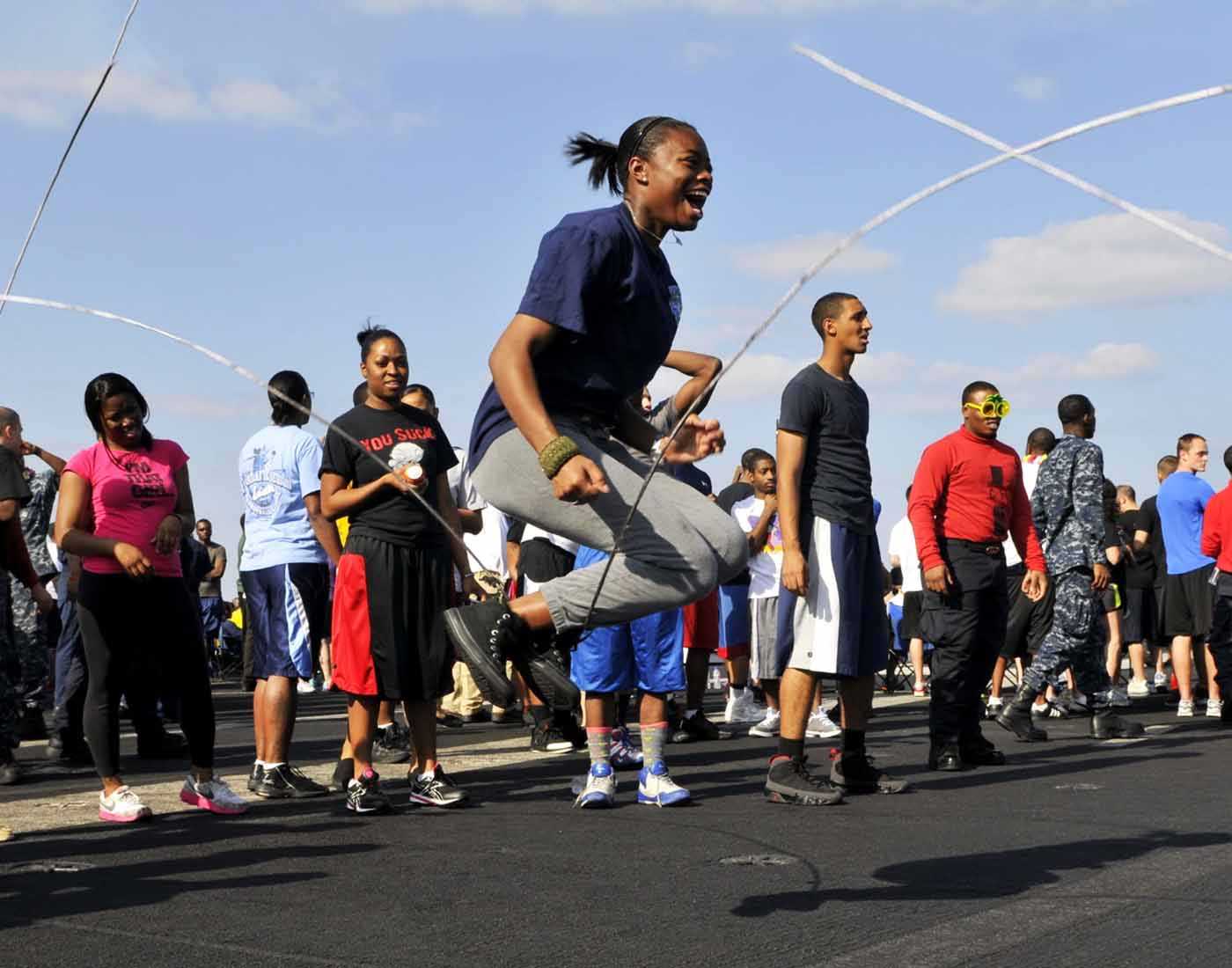 Skipping rope is also regarded as Jump Rope. The players jump over the skipping rope, balancing well in such a way that their feet won't touch the ground.

The sport is widely popularized around the world where hundreds of teams participate in various international and national competitions. The game is played by using multiple techniques such as three people skipping, with two turn rope, single jump etc.

The sport is also an excellent exercise to enhance physical attributes and maintain the cardiovascular rhythm. The game can be played in both indoor as well as outdoor.

The objective of rope skipping is to keep jumping over the skipping rope without touching the ground. There are many variants of the sport such as single, pairs, single-speed, three-person speed etc.

The participants maintain their balance while jumping over the skipping rope and try to avoid being tripped down. All the participants are required to perform the competitions with music at the background.

The rope skipping sport was organized in China where it was regarded as the Hundred Rope Jumping. It was widely performed during the Chinese New Year Festival. Later, in ancient Egypt and Phoenicia, specialized ropes were used for skipping.

The sport officially originated in the Netherlands and spread its wings to the old Atlanta in 1600. Soon, the Americans started playing the game; and the Dutch settlers were noted as the first participants in the country.

The two rope variants of rope skipping are regarded as 'Double Dutch' in honour of the first participants in the country. But in the 1950s, Double Dutch and rope jumping somewhere dragged in popularity.

In 1973, an officer from the New York Police Department (NYPD) Ulysses F. Williams began to use the sport as an outreach programme for youth. This programme was regarded as "Rope, not Dope". This idea was a stepping stone for the sports outreach, and the number of Double Dutch teams increased during the year of 1980s in New York. Later, David Walker, a former D.C. Police Officer founded the first championship programme, the American Double Dutch League (ADDL).

Now it was practised by various athletes, kids and also referred by the physiotherapists. By the early seventies, Richard Cendali, a footballer; actively participated in popularizing the sport throughout the United States.

With the increasing popularity of the sport within a few years, many National Rope Skipping Organizations were founded to administer all the national games and govern them successfully.

It is also regarded as the Awesome Annie and Awesome Anna. In this variant, the participants perform their skipping by alternatively hopping with one leg and toad without any jump. ,

In this variant of rope skipping the participants are required to jump over the skipping rope by placing their feet in a squat width position.,

It is also regarded as Boxer in which the participants are required to drag their feet sideways alternatively while skipping like a boxer hops while boxing. ,

It is also regarded as criss-cross and cross-arms. The participants usually jump over the rope while crossing their arms alternatively. ,

In this, the participants are required to perform a high jump so that the rope can pass the feet two times. If the rope is turned three times by any player under the feet, then it is regarded as a Triple Under. ,

In this variant, participants have to keep their feet and knees together by hopping in a sideways direction.,

It is the alternative hopping performed by the player by keeping their feet first apart and then together and continuously repeating this cycle.,

It's a cross between a toad and the inverse toad with both the arms crossing under one of the legs.

In this variant, the participants usually hop by shooting one of the feet first in the backward direction and the other on the front. The technique is similar to lunging exercise with the aid of skipping rope. ,

It's similar to the criss-cross variant. It is performed by crossing one arm with the opposite leg and then doing the same with another arm and leg in the opposite direction.,

In this variant, the participants usually expand the rope in the backwards direction and perform their basic jumps over it.

The objective of rope skipping is to keep jumping over the skipping rope without touching the ground. There are many variants of the sport such as single, pairs, single-speed, three-person speed etc.

The participants maintain their balance while jumping over the skipping rope and try to avoid being tripped down. All the participants are required to perform the competitions with music at the background.