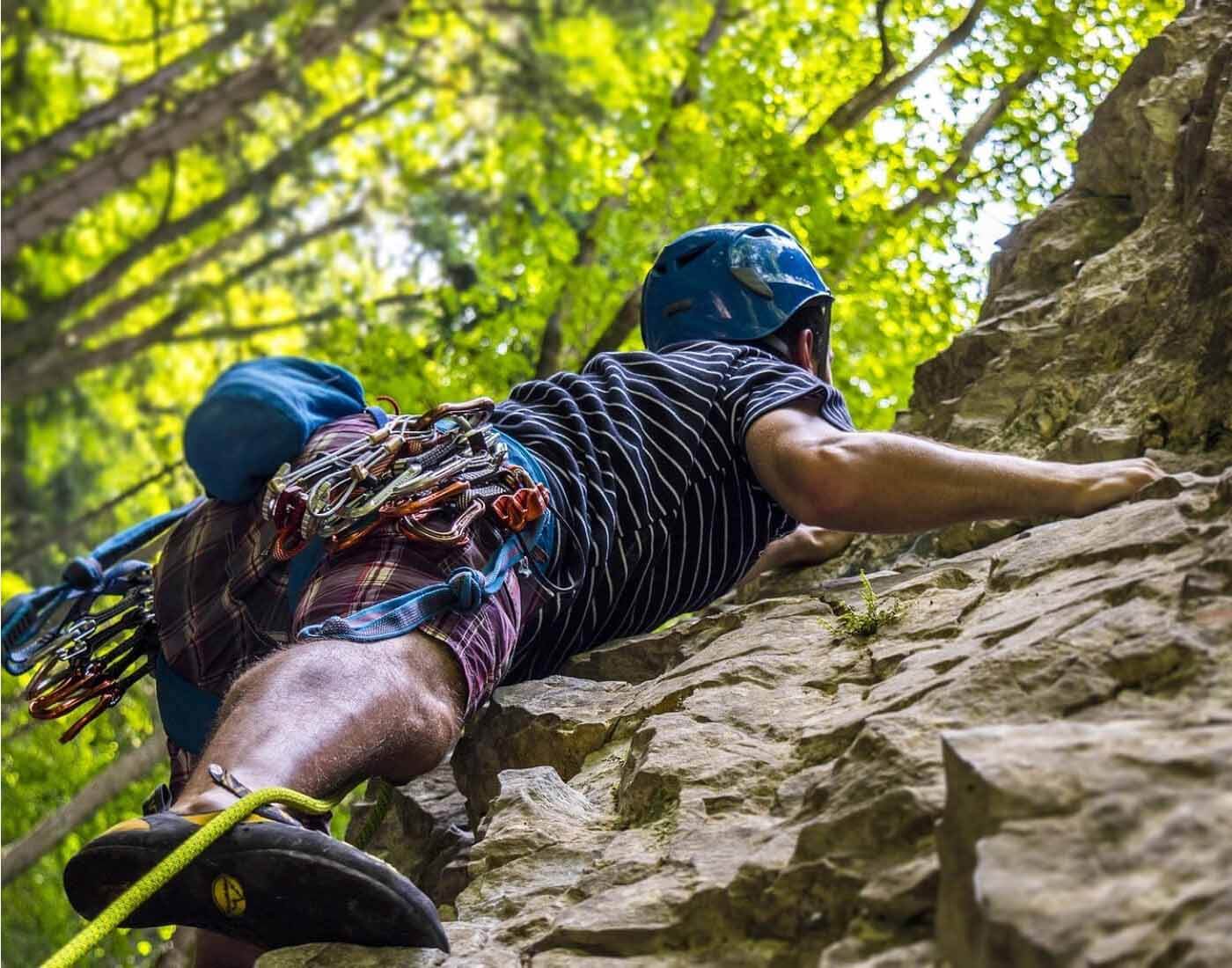 Rock climbing is a thrilling act of mounting heightened cliffs with the aid of various mountaineering equipment. It involves specific challenging routes on a rock face or wall that requires naturally formed handholds and footholds.

It also uses specialized equipment as a back-up safety system. The participants climb up, down or across natural rock formations or artificial rock walls.

Rock climbing is a mentally as well as physically challenging sport. It requires endurance, strength, agility and balancing skills along with patience. Rock climbing's main aim is to reach the summit of the endpoint of a pre-defined route without falling.

Professional rock climbing competitions intend to climb the rock's peak as quickly as possible before the other climbers, attaining the farthest point on a challenging route.

The man since the early ages has been practising rock climbing. The 200 BC paintings represent Chinese men climbing.

In the 1880s, European rock climbing gained popularity and became an independent pursuit outside of mountain climbing.

The three areas credited as rock climbing's birthplace are Elbe Sandstone Mountains in Germany, Lake District in England and Dolomites in Italy. With years passing by, rock climbing became a big hit, and climbers worldwide started to participate.

During the 1950s, John Gill led the development of bouldering and later emerged as “The Father of Modern Bouldering”.

It involves climbing with the assistance of equipment such as footholds and handholds etc. Rock climbing is now present in more than 140 countries worldwide with more than 35 million climbers practising the sport.

Bouldering is a basic form of climbing that can be done indoors and outdoors. It requires short movements without harnesses or ropes, and the climber moves over small rocks or boulders.

It usually features routes with a shorter height, but still has many complex and challenging routes. With more time granted, the only equipment provided to climbers is a cushioned bouldering pad placed below the climbing rock.

In case of a fall, the climbing shoes help to grip the rock face. It can be done solo or with the assistance of a spotter.

It is a form of rock climbing that relies on fixation of permanent anchors to the rock's wall for protection. The climbers are tied up with a rope which is clipped into the anchors to arrest any fall.

It can also be conducted indoors. The routes are although higher, and hence; it requires more safety equipment.

Trad climbing is similar to sport climbing, but the climbers' security bolts are fixed while ascending.

The climbers are required to carry nuts and camming devices along with them. It's a delicate style of climbing, as the climbers have to find the route and secure the equipment independently.

Big Wall Climbing utilizes long multi-pitch routes along the vertical rock, which often takes more than one day. In such a climbing, the climbers use portal edges (temporary tents) to rest against the rock face.

Here, the climbers use their hands and feet to find handholds and footholds to move upwards on the rock. During the climb, the climbers require various essential equipment such as ropes for weight handling and other means of climbing protection. The equipment is also necessary to protect themselves in case of accidental falls. No pitons are used as protection during a free climb.

Rock climbing's primary purpose is to reach the summit of the endpoint of a pre-defined route without falling.

Professional rock climbing competitions intend to climb the rock's peak as quickly as possible before the other climbers, attaining the farthest point on a challenging route.