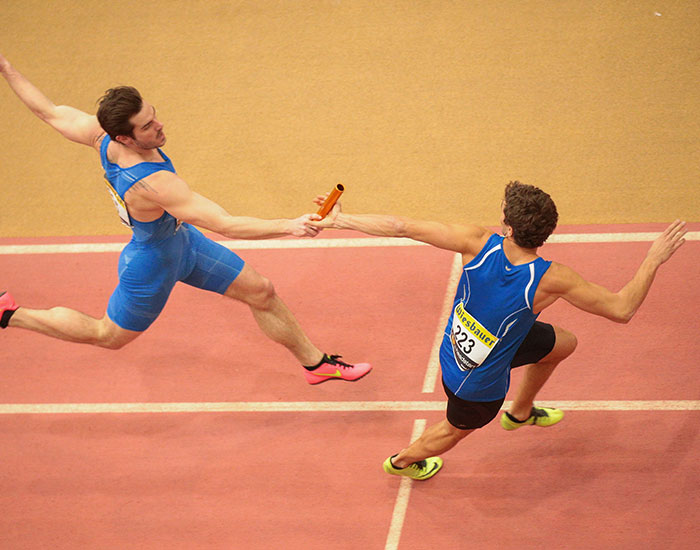 Relay race, also called Relay is a track and field sport that consists of a set number of stages (legs) in which four members of a team take turns in running down the track. The runner finishing one leg is required to pass on the next runner with a stick-like object known as a “Baton”. (Note – The runner must pass on the Baton to the next runner within a 20 - meter exchange box that is placed 10 meter before and 10 meter after the start of each leg.)

The concept of relays was originated in Ancient Greece where a message stick was delivered via a series of couriers. The first modern relay races were organized by the New York fire service in the 1880s as the charity races in which red pennants were passed on instead of a baton over every 300 yards. The first Olympic relay took place in 1908 that was divided into two legs of 200 m followed by one of 400 m and the other of 800 m.

A mixed (two men, two women) 4 x 400m relay was featured for the first time at the World Championships in 2019, Doha, Qatar and was later introduced into the Olympic programme at the Tokyo 2020 Games. The men’s and women’s 4 x 400m relay has been historically dominated by the USA.

The main objective of this sport running is to reach the end as quickly as possible and each member of the team takes a turn completing part of the course.

Athletes wear a pair of shorts and a short-sleeved or sleeveless T-shirt or a top indicating the athlete number.

Athletes use a pair of shoes (usually made from nylon) that have a maximum of 11 cleats which are not more than 9 mm long offering maximum traction.

A baton is a lightweight, hollow aluminum tube used in relay races. It is a smooth tube having a length of 30cm, diameter of 4 cm and weighing around 50 gram.

(Note: It is the baton whose time around the track is measured and not the time of the athlete.)

When the runners are almost side on side such that the Baton in a downward motion. This grip is popular in the 4 x 100m events.

In this method, the passer places the Baton in the open hand of the receiver and used mainly in the 4 x 100m events. This method reduces the distance covered by the Baton but only if the two runners are perfectly coordinated.

In 4 x 100m events, the second runner starts to run (without looking backwards) with his/her arm stretched straight backwards when the passer reaches a certain point of the track and gives him/her an auditory signal such as “stick!” to tell the receiver to hold the baton. It is called a “blind handoff.” In 4 x 400m events, unlike the sprint relays, the runners look back and grasp the baton from the passer. The visual contact is allowed due to the fatigue of the incoming runner which may affect his/her speed and makes the pass too risky.

In 4 x 100 m relays, athletes must remain in their designated lanes through the run, i.e., from start to finish. In 4 x 400m relays, the first 500m is run in the designated lanes and then they typically battle to hold the inside line.

The start referee is responsible for starting the race by giving the commands like “on your marks” and “set” and for firing the start gun.

The time keeper is responsible for recording the times of the athletes.