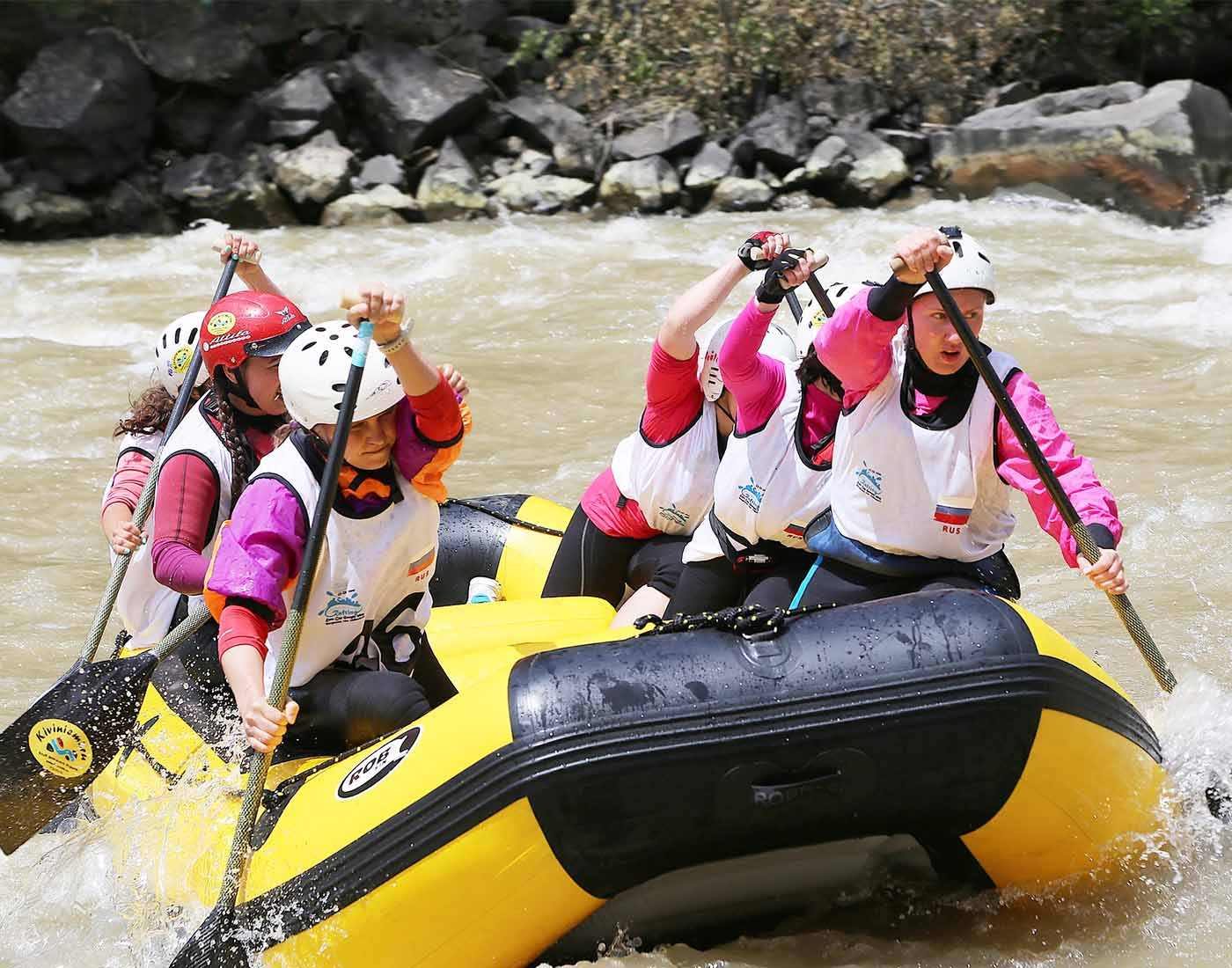 Rafting is an adventurous sport which involves the rider to navigate the route of the river with an inflatable raft through several levels of difficulty, depending upon the state of the river. It is all about competition, fun and nonstop thrills.

It usually involves inflatable rafts of various sizes, designed for more than two people. Many rafts have the capacity and buoyancy to carry equipment on extended journeys. Rafting also carries some risk and required high technical skills and immense teamwork to enjoy the ride. The adventure sport has become popular during the 1950s, which evolved the individual paddling raft. Paddles and ores are the principal means of propulsion for rafting.

The rafts are typically made with advanced nylon or Kevlar infused plastics like PVC or urethane. They come in various sizes and varieties with specific river condition.

The International Rafting Federation is the highest governing body for the sport which conducts competitions and is also responsible for popularizing the sport. The World Rafting Championship is the highest level of competition, conducted for rafting in which races are conducted in the open category for riders of different age groups, for both men and women.

Rafting has an ancient existence. Travelling by water has always been an important source of transportation since early ages. The first rafting trip was made in the year of 1811 on the Snake River. In 1840, the Rubber Raft was invented by Lt. John Fremont and Horace H. Day.

By 1869, scientific expeditions explored the Green and Colorado River. By all these ages, rafting became popular, and in 1940, the first commercial whitewater rafting trip was organized in the Salmon River.

When World War II ended, a huge amount of rafts were available, and people started to explore and go for trips on western rivers. During the 1960s to 70s, whitewater rafting popularised and spread its wings to the East. The popularity of whitewater rafting kept on increasing in the 1980s. In 1972, whitewater paddling was much popularized that became the centre of attraction after it was included in the Olympic Games in Munich.

During 1996, the Ocoee Whitewater Center was built for the Olympic Games. The International Rafting Federation is the backbone which organized the World Rafting Championships. The World Rafting Championships have been held on the Reventazon and Pacuare rivers, Costa Rica in 1998, Gauley River in 2001 and recently in Vrabs and Tara Rivers in Bosnia and Herzegovina in 2009.

During the Olympic Games in 1972, this sport was also included in the Barcelona Games in 1992.

In 2010, the IRF held their first-ever event for the R4 (4 man raft) World Champ. The Dutch Water Dreams hosted it on the artificial course in Zoetermeer, Netherlands (2010). Since 2013, all four categories of rafting such as the Open, Masters, Under-23 and Under-19 have been counted at the IRF World Rafting Championships. In 2018, the Championship was held in the Alumine River, located in Argentina and in 2019, in the Tully River in Australia.

The International Scale of River Difficulty of white water rafting has six grades of difficulty. They differ by being simpler to very dangerous and potentially deadly.

Class 1 - It includes races on small rough areas, which may require slight manoeuvering. Only basic skills are required.

Class 2 - It includes races over rough water with some rocks and might require some manoeuvering. The skill level required is basic paddling tactics.

Class 3 - This class is for races over small waves, maybe a small drop, but no considerable risk exists. Some exceptional rafting experiences are required for this class.

Class 4 - It involves whitewater races on medium waves along with sharp manoeuvering skills. Exceptional skills of rafting are required.

Class 6 - Class 6 races are considered to be dangerous. Rafters are expected to encounter substantial drops that will impart severe impacts beyond the structural capacities. Complete rafting experience is required to attempt this class