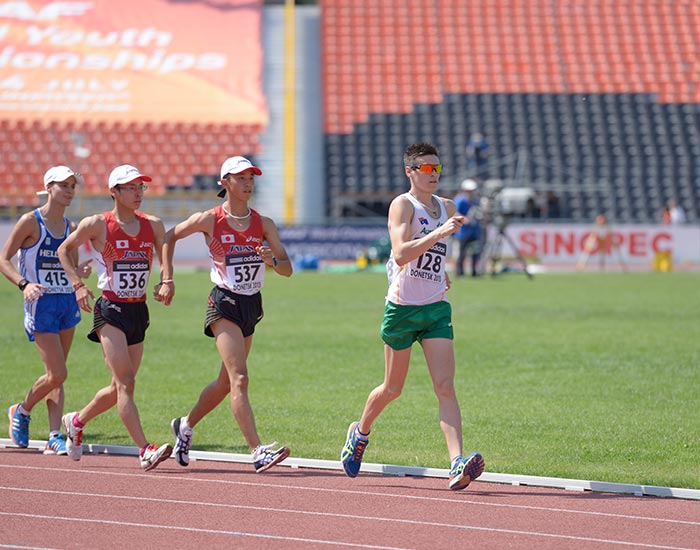 Race Walking is an athletic event of foot race that is claimed to be harder than running and is a test of an athlete’s concentration and endurance.

These events typically take place either on roads or running tracks and vary from 3000m to 100km.

The two race walking distances contested at the Summer Olympics are:

1) 20 kilometers race walk – For both men and women

Race walking has its roots connected from the 17th and 18th centuries. The first competitors were the footmen who would run and walk by the side of their masters’ coaches.

The sport became an increasingly popular professional activity during the 19th century when it was known as ‘Pedestrianism’.

Race walking was first appeared at the Olympics in 1904 with a half-mile race that was part of the 10-event ‘all round championship’ the former name of decathlon. Individual races, initially over shorter distances that have become common today were introduced at the 1906 Intercalated Games, Athens, Greece and expect the 1928 Amsterdam Games these have been included in the Olympic Games and World Championships since then.

This is the shortest distance in the international championship race walking programme and is traditionally held on a looped road course.

The 20 km race walk has been contested for the men at the Olympic Games since 1956 whereas the women competed for the first time at the 1992 Olympic Games, initially over 10 km. But, later on it went over with 20 km at the 2000 Sydney Games.

China has been one of the dominant 20 km race walking nations in the recent times, winning four of the six men’s medals available at the 2012 and 2016 Olympic Games.

This is the longest athletics race walking event on the Olympic Programme and is traditionally held on a looped road course.

The finest 50 km race walker in history is Robert Korzeniowski of Poland who had won a stunning hat-trick of Olympic titles from 1996-2004.

The main objective of the participants in the sport is to swiftly walk through their way to the finish line.

Loose fitted, lightweight shorts are worn by athletes that are made of breathable fiber to avoid chafing.

The entire course is a loop that the athletes walk over until they have reached the required kilometers.

The race walking is also conducted on running tracks because of its consistent surface. The tracks are rubber coated to make the surface uniform and unbroken. Each lane on the track is about 122 cm wide and the length of the track ranges from 200 m to 400 m long.

The race walking involves a very difficult technique in which the athlete uses to move forward as quickly as possible without running.

The technique is different for uphill and downhill walking. When climbing up the walkers tilt their bodies forward, shorten their stride and ben their arms a little more and swing them less to save energy and speed.

Whereas, while going down they lean back, lengthen their stride and lower their forearms and swing them more in order to keep in contact with the ground.

In the very first step the athletes try to remain as relaxed as possible and maintain the upper body in straight position for balance while walking.

In this step the athlete pushes off his back leg and stretches the other leg forward with a swing of the hip that causes the hip rotation usually seen in race walking. The energetic arm movement gives the stride maximum amplitude as they aid with balance while the weight gets transferred.

3) Both feet on the ground

In this step the athlete puts the other foot on the ground before the back foot leaves the ground. Moreover, it is made sure that the feet are placed such that they line in front of each other forming a straight line.

In the last step the athlete uses his upper leg muscles for transferring his center of gravity to move his body forward. Usually, the elite walkers walk faster than 15 km per hour.

The athlete who reaches the finish line first is declared as the winner. The Judges observe the walkers very carefully as:

1) If a competitor does not step onto a straight leg or loses his contact from the ground more than twice then the competitor is disqualified.