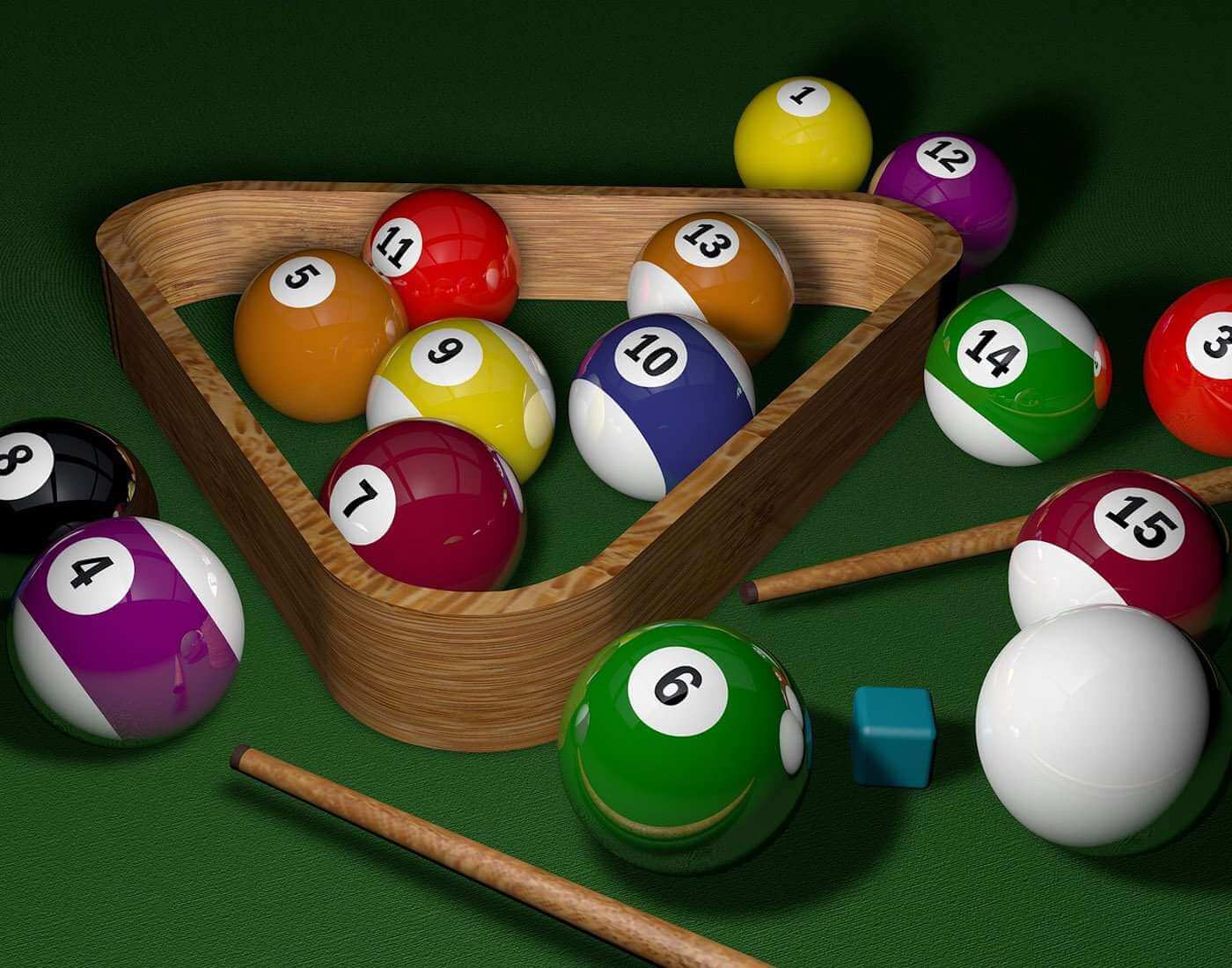 Pool also known as Pocket billiards or Pool billiards is a cue sport. It is played on a six-pocket table using a cue (stick) and a set of colored object balls. There are many variations of this game in which eight-ball pool, nine-ball pool, ten-ball pool, black ball pool and 14.1 continuous pool been most commonly played with each variation having its own set of rules. In 8-ball pool and blackball pool, thereare 15 object balls in which those numbered 1 to 7 have different solid colours while balls numbered 9 to 15 are white with different coloured stripes and the 8-ball is solid black.

Players of the 9-ball pool use nine of the numbered object balls in which 1 to 8 are solid coloured and the 9-ball is striped. In 14:1 continuous pool, the 15 object balls are numbered. The sport is also very popular in clubs and bars around the world.

To score maximum points by pocketing the balls in a predetermined set of order by following all the rules.

In this variation, 9 object balls are used. The player has to hit the lowest-numbered ball on the table and legally pocket the 9-ball (it must be pocketed last).

In this variation, 10 object balls are used. This variation is similar to the 9-ball pool but slightly harder than it. In this game, all shots must be called by the player in attempting to pocket a ball, i.e., the aimed ball and the pocket must be indicated for each shot.

In this variation, 15 object balls including a black ball, 7 red balls and 7 yellow balls are used. The player who pockets his group of ball (either red-colored or yellow-colored set) followed by legally pocketing the black ball wins the game.

In this variation, 15 object balls are used with the goal to reach a set no. of points before the opponent. Usually, the game is played to 100 or 125 points. In this game, the player nominates the aimed ball and the pocket on every shot, scoring a point every time he/she achieves it.

The game of pool is played by either individuals (one player each side) or by teams.

Two-piece wooden sticks are used in pool that are around 1-1.5 inches long and weighs around 17-21 ounces. The diameter of the stick tip is 12-14 mm.

A six-pocket table is used in pool which has sizes ranging from 3.5 x 7 feet to 4.5 x 9 feet. The slate bed of the pool table must be minimum 1 inch thick. The table has an escape tray which holds the pocketed balls in the order in which they went down.

A good stance help the players in achieving the balance needed to play the shots, but there is no rule regarding a player’s stance. However, a common stance opted by many players is bending the front leg and keeping the back leg straight so that the body weight of the player is evenly distributed.

A six-pocket table is used in pool which has sizes ranging from 3.5 x 7 feet to 4.5 x 9 feet; it has its length and breadth in a ratio of 2:1. The slate bed of the pool table must be minimum 1 inch thick. The table has an escape tray which holds the pocketed balls in the order in which they went down.

To score maximum points by pocketing the balls in a predetermined set of order by following all the rules.