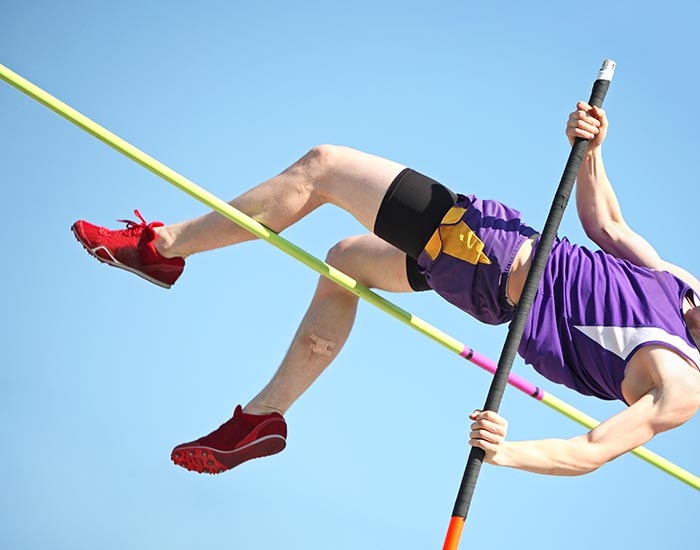 The Pole Vault is an athletic (track and field) event that is organized by the World Athletics formerly known as International Association of Athletics Federations (“IAAF”) for both men and women. In this sport the Competitors sprint along a runway carrying a long, flexible pole that they plant in a box and transfer the Kinetic energy produced from running to the potential energy stored in the pole to lever themselves over a crossbar that is suspended several meters above the ground between two upright stands. The height of the crossbar is raised after every round and all the athletes (vaulters) are given three attempts.

Poles were practically used as a mean of passing over natural obstacles in marshy places such as the province of Friesland in the Netherlands, along the North Sea, and the great level of Fens in England across Cambridgeshire, Huntingdonshire, Lincolnshire and Norfolk. The artificial draining of these marshes created a network of open drains /canals that intersected each other. Moreover, to cross these drains every house kept a stack of jumping poles and used them for vaulting over the canals.

Modern pole vaulting was originated around 1850 in Germany when the sport was adopted by a gymnastic club. The first recorded pole vault competition was held in England in 1812. This sport was included in the Summer Olympics held at Athens, Greece, since its inception in 1896. The Men’s Pole Vaulting became a medal event in the same year whereas the Women’s pole vaulting was included in the 2000 Summer Olympic Games held at Sydney, Australia.

Broad jumping is a closely related sport in which the athletes use a pole to gain distance rather than height. It is widely practiced in and around North Sea but has never become a competitive sport.

The main objective of pole vault is that the vaulter has to clear a cross bar supported with the help of upright stands and the player has to ensure that he / she gets down on the landing mat without getting the crossbar down.

Each Country selects one player for both male and female events for the competitions. This selection takes place in various stages organized by the authorities of the respected countries or the federations involved.

Men and Women participate individually in the competitions country-wise.

The most important equipment used in Pole Vault is:

The Runway used in this sport is a straight, 40–45 m (131-147 ft. 6 in.) long stretch of all-weather polyurethane track to which the pole vault box or slide way and the crossbar lies at the end.

This is commonly made from stainless steel and is shaped trapezoidal. The box is one meter (3 ft. 3 in.) long and deepens up to twenty centimeter (8 in.) and narrows up to fifteen centimeter (6 in.)

Crossbars are made of lightweight material such as reinforced plastic or aluminum having a length of approximately four meter (13.1 feet) that rests on two long uprights with adjustable heights. The pegs, positioned on the inside support the uprights and allow the crossbar to raise and lower as per the competition progresses.

The overall size of the pole vault landing area shall be  a minimum of nineteen feet - eight inch (6.03 meters)  wide and usually twenty feet - two inch ( 6.15 meters)  deep is made of plastic-covered layers of foam-rubber on which the athletes land after jumping over the cross-bars.

This is a long, flexible pole usually made of carbon fiber or fiberglass. The pole used in pole vault can be of any length or diameter depending on the athlete’s preference.

Vaulters wear running shoes with cleats on the outer sole for a better grip on the runway.

Vaulters wear close-fitting sports vest and shorts so that they can reduce the danger of snagging the pole while running and jumping.

Now the athlete needs to know the exact distance for building up the speed and momentum for a great jump. Therefore, the athlete measures the strides by holding the pole and running down the runway but away from the pit.

Note: The athlete has to end the stride with the left foot to get a proper jump and landing.

3) Running with the Pole

The athlete needs to keep in mind that the pole should be over the shoulder or at the hip while running with it.

4) Planting the Pole in the Pole Vault box

Now, as the athlete is close to the box they should plant the pole in the box at the start of the third stride with the left foot on the runway then right and finally the left foot while taking off.

Usually this is called as SNAP, CRACKLE and POP.

This is the position at which the Vaulter (athlete) is off ground and the extended arms put the pressure on the pole and the knee drives up with trail leg back.

In this position the Vaulter is still applying pressure on the pole. The Vaulter should draw a straight line with respect from the top hand through the trail leg to the box.

The Vaulter still applies pressure on the pole with the knee driving while swinging a straight trail leg in the air.

Now, in this position the Vaulter has the lower end above the shoulders forming a J-shape.

This is nothing but the neutral position in which the head and legs are together in straight line with right hand above the left hand.

In this position the right hand is still above the left but the head turns slightly downwards with feet together extending upwards.

This is the final and the most important step in which the Vaulter releases the pole and pikes over the bar with chest in a curved shape and arms and legs extended to avoid touching the bar.

Finally, the Vaulter lands on the mat leaving the pole behind and the height of the jump is recorded.

Once the Vaulter is ready to start, they have three attempts to clear the height. If a height is cleared, the Vaulter advances to the next height, where they will have three more attempts. Once the Vaulter has three consecutive misses, they are moved out of the competition as per the rules.  The highest height they have cleared is their result and who ever scores the highest height when the final result is declared; they are declared as the winner.