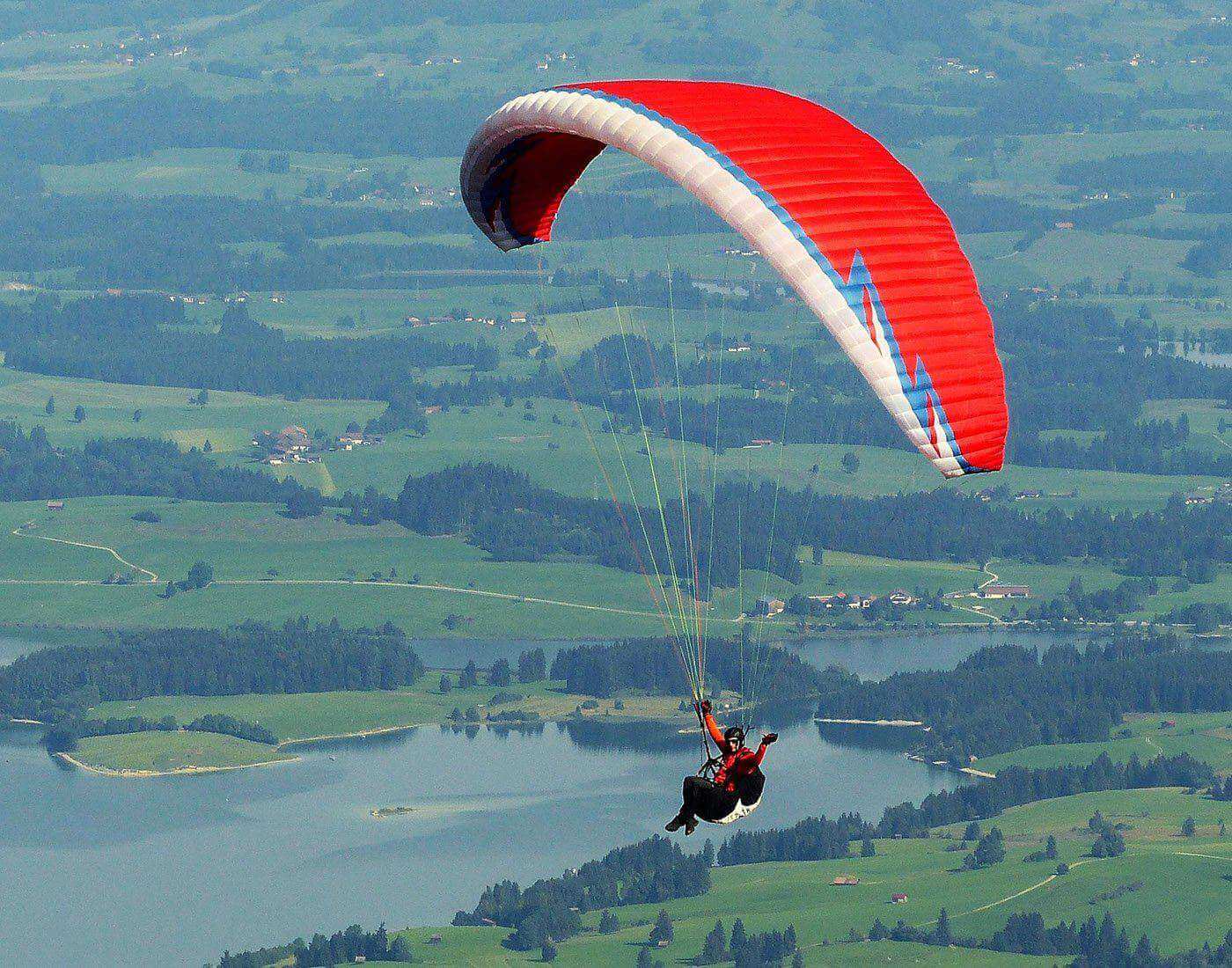 Paragliding is an adventure sport practiced as a recreational as well as a competitive sport. Paragliders use a special parachute, known as a paragliding wing, to catch air currents and soar over the countryside. They are towed into the air by winches or run down mountains or hillsides to take off. In cross-country competitions, the winner is the one who completes the course in the fastest time or the one who flew furthest if no one completes the course. The sport can be traced back to 1952 when Domina C. Jalbert advanced gliding parachutes with multi-cells and controls.

A French engineer, Pierre Lemoigne presented improved parachute designs in 1961 that led to the Para-Commander. The first official FAI World Championships of the sport took place in 1989 in Kossen, Austria.
The goal in the cross-country competitions is to fly round a predetermined course with a start, 4-6 turn points and a finish line. In aerobatic competitions, the goal is to perform some manoeuvres either individually or in pairs. In Bivouac flying competitions, the objective is to follow a particular route and flow or hike over several days.

In 1952 Canadian Domina Jalbert licensed a parachute with multi-cells and controls for parallel glide.

In 1954, Walter Neumark anticipated (in an article in Flight magazine) a time when a lightweight glider pilot would be "ready to glide himself by running over the edge of a mountain or down an incline ... "

In 1961, the French specialist Pierre Lemongine created improved parachute design that prompted the Para-Commander. The Para-Commander had patterns at the back and sides that empowered it to be towed into the air and controlled, prompting parasailing/parascending.

Domina Jalbert developed the Parafoil, which had separated cells in an aerofoil shape; an open leading edge and a closed trailing edge, swelled by passage through the air – the ram air design.

In this event, pilots fly round a fixed course with a start and a finish line with some turn points (usually 4-6). The winner is the fastest pilot round the course or the one who flew furthest when no one completes the course. The pilot has to carry a GPS receiver which records their flight track to judge whether they correctly followed the course and to determine timings.

In this competitions, pilots in pairs or individually perform some manoeuvres in the air. This is the most spectacular event for spectators to watch from the ground.

In this event, a certain route has to be followed by the pilots to flow or hike over several days.

Male and female paraglider pilots compete as individuals or in teams in various paragliding events.

Reserve parachutes are used by paragliders for high altitude flights. In case of any problem, the parachute is manually deployed by the pilots which carries both the pilot and the glider down to the ground.

Goggles are usually worn for protection of the eyes.

Lightweight but strong footwear are worn which support the pilots at the time of landing.

A two-way radio is used for training purposes to communicate with other pilots.

A paragliding harness is a set of straps used for protecting the pilot.

The wing or canopy of a paraglider is designed to be inflated by air pressure and controlled by lines. The paragliders are light, portable and easier to assemble and are usually made of high performance non-porous materials. The speed of the paragliders usually has a range of 20-75 km/h from stall speed to maximum speed.

Protective helmets are worn by pilots for protection against head injuries.

Pilots wear one-piece jumpsuit that provides a consistent surface for the harness and keeps them warm.

The sport of paragliding does not have a specific playing area. It includes a target/landing area on the ground on which the pilots land. The landing area in paragliding accuracy competitions is an electronic target pad which is a pressure sensitive device and measures 30 cm in diameter. Around the target pad, circles of 0.5 m, 5 m and 10 m are marked.

In this phase of paragliding, the wing is placed in the airstream either by being pulled or running or an existing wind. After this, the wing moves up over the pilot, the pilot is then lifted from the ground and after the safety duration, sits down into the harness. The three launching techniques are: forward launch, Reverse launch and Towed launch.

Before landing paragliders lose their height by creating a figure of 8 while flying over the landing area until the correct height is achieved after which they "stall" the glider in order to land. Landing of the paraglider involves lining up for an approach into the wind and exactly before touching the ground, flaring the wing to minimize the vertical and horizontal speed.

Controls are held in each of the hands of the pilot and are connected to the left & right sides of the wing. The controls are called brakes which provide the primary and most general means of control in a paraglider.

Responsible for ensuring that the competition runs in a fair, safe and satisfying manner in accordance with the rules and regulations.

Responsible for facilitating the smooth running, fairness and safety of the competition but has no formal authority to make decisions.

A panel consisting of 5 to 8 judges including the chief judge is responsible for judging the aerobatic competitions and scoring the pilots.

A team of four to five judges determine each pilot’s performance by observing the performances and recording a score.

The goal in the cross-country competitions is to fly round a predetermined course with a start, 4-6 turn points and a finish line. In aerobatic competitions, the goal is to perform some manoeuvres either individually or in pairs. In Bivouac flying competitions, the objective is to follow a particular route and flow or hike over several days.