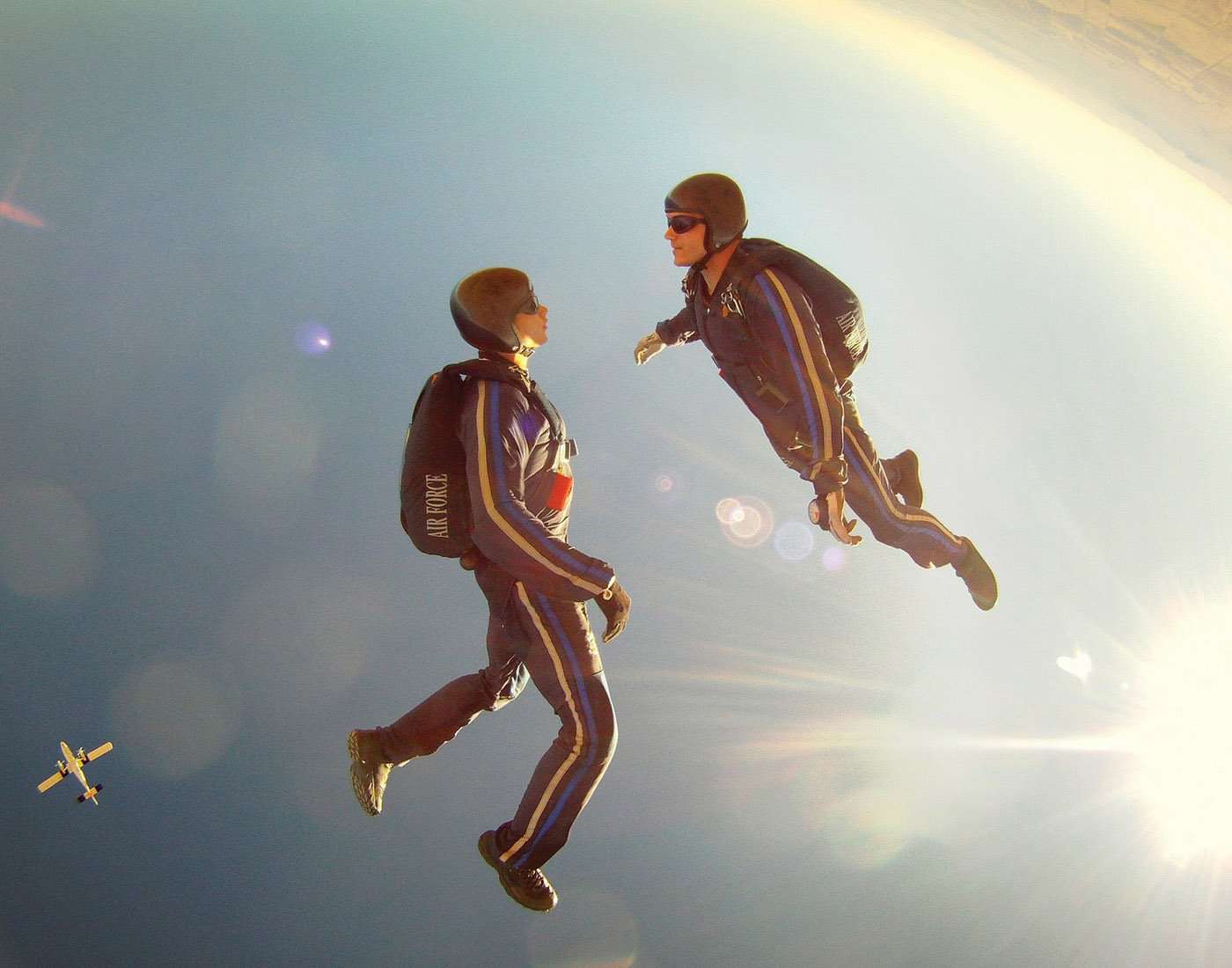 Skydiving, widely known as parachuting, is an extreme sport which is an act of transiting from a high point in the sky to Earth with the aid of gravity and involving a control of speed during the descent by using a parachute. In this sport, skydivers launch themselves into thin air from a great height, usually from an airplane, they go into free fall for a period of time before opening a parachute to enable them to land in a drop zone at a safe speed.

It is usually a recreational sport but experienced skydivers take part in competitions organized by the Fédération Aéronautique Internationale (FAI), the global governing body of the sport or by other national federations. The first ever parachute jump was performed by Andre-Jacques Garnerin on 22nd October 1797 in Paris from the altitude of some 600m. The first intentional freefall jump was performed by Leslie Irvin on 28 April 1919 in Ohio. FAI approved the first parachuting records in 1951 and organized the first world parachuting championships in the same year in Yugoslavia.

To jump out of an airplane at a certain altitude and perform the acrobatic movements in free fall before landing on the ground.

While the utilisation of parachutes dates right back to 1100 in China, the action we call "skydiving" can be most straightforwardly connected to France in the late eighteenth century.

Skydiving has made considerable progress from the earliest starting point of parachuting, which dates right back to the tenth century China. A man named Jacques Garnerin was well known in late eighteenth century France because - Garnerin bounced from hot air balloons with a parachute for a show! And in the change from inflatables to planes, American parachutist Tiny Broadwick was the first lady to hop from an aircraft toward the start of the twentieth century.

In World War I, observational air balloons were regularly utilised, particularly in zones that used channel fighting. The men who were positioned in the balloons were airborne for a long time, and even though they were intensely watched and guarded, they were still clear targets for the adversary's flying aircrafts. Because of the hazardous idea of being a static focus in a threatening area, administrators/balloon operators were outfitted with crisis parachutes that enabled them to escape if their inflatable was assaulted. 1922 was the year we saw the first crisis parachute bailout employing a plane.

World War II brought the trend of paratrooper inclusions into adversary region, which made a mass of skilled parachutists and parachuting gear. After the war, these fighters weren't prepared to surrender the surge they got from parachuting, and this offered path to the development of a side interest - the sport of  parachuting. As it developed in prominence, rivalries started to rise, and the following cult was created.

In the mid-1950s, Raymond Young was the first to utilise the word "skydiver" to portray his friends in the game. Commercial skydiving academies and schools started to spring up through the 1960s. As far back as Joseph Kittinger, a U.S. Flying Corps pilot, set the world record for the highest parachute jump when he hopped from an outdoors gondola at 102,800 feet. Kittinger's record was held unbroken for 52 years until Felix Baumgartner broke it in 2012.

Male and female athletes compete as individuals or in teams in various skydiving events.

The parachutes have steering lines and toggles which are used by skydivers to control their flight and have an aerodynamic canopy like an airplane’s wing.

An altimeter is attached with the sky-divers’ chest strap, wrist or beside the ear which gives audible signals and shows the height above the ground.

A harness system is strapped to the body of the sky divers which contains the pack with parachutes.

Lightweight but strong footwear are worn which support the sky divers at the time of landing.

Protective helmets are worn by sky-divers for protection against head injuries.

Sky-divers wear one-piece jumpsuit that provides a consistent surface for the harness and keeps them warm.

Goggles are usually worn for protection of the eyes.

The sport of skydiving/parachuting does not have a specific playing area. It includes a target/landing area on which the skydivers land after launching themselves into the air from the airplane. The target is usually made of a light color and is 10m in diameter which helps the pilots spot their objective in the first part of the jump.

In this discipline, it is judged that who could land closest to the target/chair, remove the harness of the parachute then sprint to the chair, sit fully on the chair and rock back & forth at least one time. The time is recorded from the moment the feet touches the ground until that first rock.

This technique involves flying diagonally with a definite relation between the angle and trajectory speed of the body, to acquire an air stream which allows for the control of flight.

It is an art of building patterns or formations in freefall. The discipline can be executed either in a prone position or vertically (with head or feet towards the ground).

In this discipline, the skydivers have one of the three goals based on the task: to complete the course in the least time, consequently having highest speed, to complete the water section then land on the target as accurately as possible or to achieve the longest distance from the entry point gate before landing and touching the ground.

Responsible for keeping the target/landing area free of hazards, checks all descents and constantly keeps a check on wind and weather conditions. If these conditions become unsuitable, he/she have the authority to halt the competition.

It consists of at least three members of the CIP which is the international parachuting committee of the FAI.

Usually a group of five to seven judges including the chief judge and/or his/her assistant judge each event in the championships.

To jump out of an airplane at a certain altitude and perform the acrobatic movements in free fall before landing on the ground.