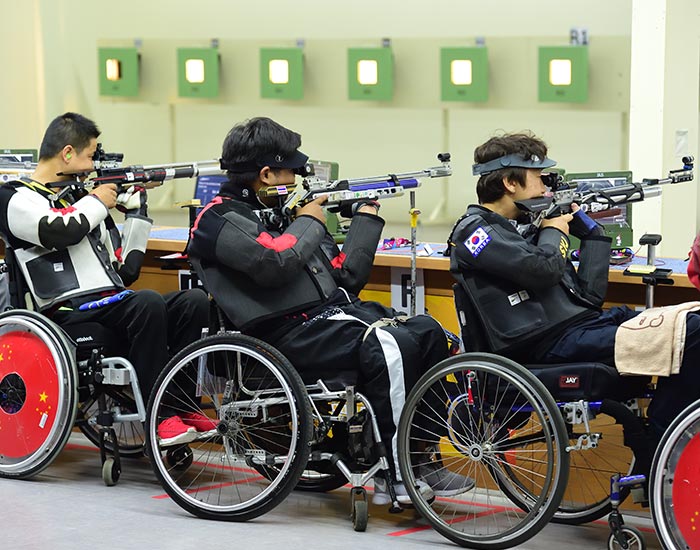 The sport shooting deals with the precision, accuracy and control of an athlete over the target. In Para-Shooting sport the athletes with physical impairments participate in rifle and pistol events. It is a target oriented sport, the athletes use focus, determination and controlled breathing to control and reduce their heart rates to improve their stability which leads to them to perform high. The sport requires a great amount of power and emotional control for having steady hands as well as the mind while delivering a sequence of shots.

Shooting has been the part of Paralympics programme since the 1976 Toronto Paralympics and is currently practiced in more than 65 nations all around the world. The IPC is the official governing body of the sport and follows the rules and regulations of International Shooting Sport Federation (ISSF) in combination with its own World Shooting Para Sport Technical Rules and Regulations.

Shooting has been on the Paralympic program since the Toronto 1976 Paralympic Games and today is played in over 65 nations.

In the past, shooters used to fire at paper targets stuck to the wall. That is way different from how games are held in the present day, where targets and scoring are considerably more complicated.

After 1976, the game schedule developed quickly. From three rivalries constrained to rifle shooting, by Arnhem 1980 there were 11 medal occasions including the addition of three in pistol category.

This improvement levelled out after New York/Stoke Mandeville in 1984, by which time the program included individual and group gun and rifle occasions in prone, kneeling and three positions.

Male and female participate in the sport with individual and mixed competition for each of them.

The distance between the shooter and the target in both the events is 10m, 25m, and 50m.

Mode Of The Competition

The competition mode is very similar to that of able-bodied shooting sport. The aim is to hit a series of shots inside the center ring (bull’s-eye) of the given target with the centre ring awarding 10 points and the most outer ring 1. The scoring is further divided into decimal system with 10.9 being the very centre of the target. The idea of the accuracy can be determined by the width of the bull’s-eye that is .5cm, in which the athletes shoot in the air rifle event.