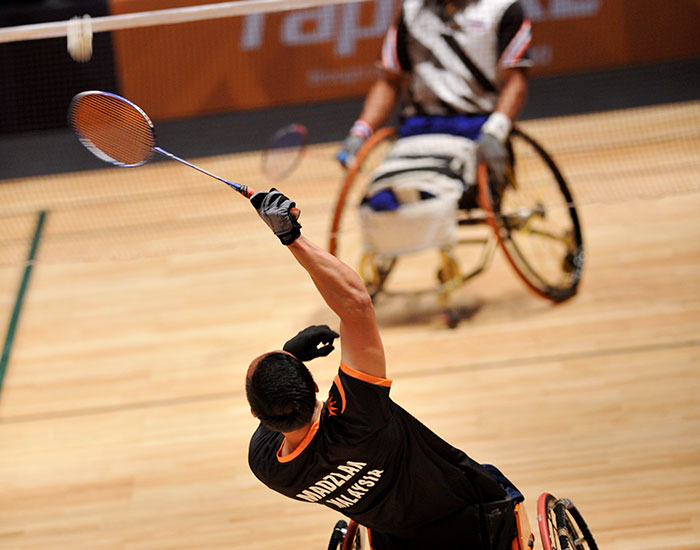 Para-Badminton is an adaptation of badminton for athletes with physical disabilities. There are six different classes defined for Para-athletes based on the type of disability (wheelchair, standing and short stature).

The sport has been competed internationally since the 1990s and the first World Championships took place in Amersfoort, Netherlands in 1998 and now occurs in every two years. The sport will be a part of Paralympic Games for the first time in 2020 in Tokyo.

To hit the shuttlecock (also known as shuttle or birdie) over and across the net on the opponent’s court so that the opponent can’t find time to return it back and score a point.

Amputee players belonging to categories SL3, SL4 and WH may use a prosthetic limb; for category SU5, these are not allowed. The prosthetic limb must be of the same length as the players' existing limb and in proportion with the players' other limbs.

Leg amputees (upper or lower both) may use a crutch while playing which must not extend the players' natural height from the armpit to the ground.

A player's body is fixed with the wheelchair with an elastic belt or a strap around the waist and/or across the thighs and feet must be attached to the footrest of the wheelchair.

The playing techniques in Para-badminton are same as that in Badminton.

The playing court of Para-badminton is same as that of badminton except that the singles matches of wheelchair and standing classes play half-court while in doubles matches both these classes play over the whole court. In wheelchair classes, the area between the short service line and the net is defined as "out" (outside court limit).

Most senior official and overall incharge of the tournament

Incharge of the match & the court usually sits on a high chair overlooking the net and reports to the referee.

Responsible to call service faults & to watch if the serve is legal.

To hit the shuttlecock (also known as shuttle or birdie) over and across the net on the opponent’s court so that the opponent can’t find time to return it back and score a point.