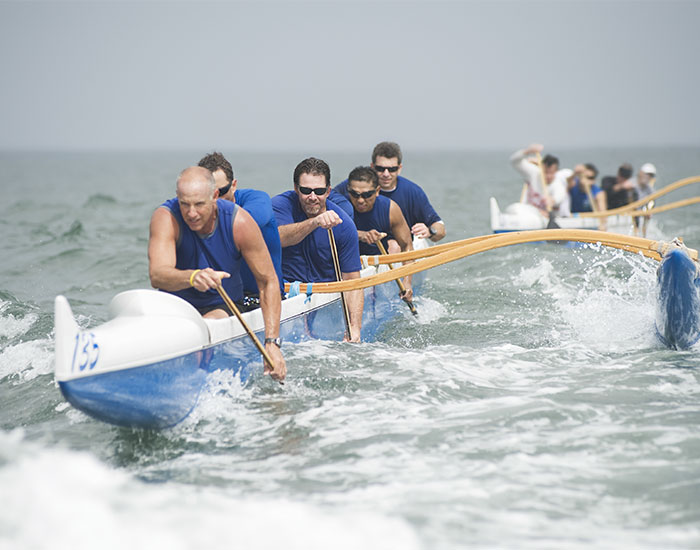 The Canoe Ocean Racing is another white water discipline that constitutes of long distance surf ski, sea kayak, and sea touring races. The sport is played worldwide along with the ICF World Championships held in every two years. The fastest boat over long distances on ocean swells is the surf ski, the only flatwater boat that can go faster being an Olympic-standard canoe sprint boat. The challenges that the canoe ocean racing faces are the large waves driven by the wind, hurricane-generated ground swells and paddling in wind speeds of more than 20 knots. Surf skis began in Australia in the 1900s when two siblings, Harry and Jack McLaren, used them around their family’s oyster beds on Lake Innes in New South Wales. The speed and variety of the boats made them ideal for lifesaving, and in 1946 surf ski became a part of the lifesaving competition program.

The objective of the competitor is to complete the course in the minimum possible time.

Male and female participate individually in the races.

The three types of events held in Canoe Ocean Racing are -

The courses may be held on any open water or open sea which can vary in length depending upon the type of the race that is going to be held. They may be of 10km to multi-day races over long distances. The races are organized in single and double surf skis, sea kayaks, and in single or six-person outriggers.

The organizer of the contest. He is the decision maker of all the matters that are arise during the actual contest.

Looks after the preparation and smooth running of the competition.

He is responsible for recording the results and the preparation of the list of prize winners.

He decides upon all the questions that are concerned upon the start of the race, and is solely responsible for the decisions as to a false start.

He must look after that the rules and regulations are compiled with while a race is going on. If the rules are broken, the Umpire shall report the infraction to the Race Director, who, in turn, shall refer it to the Competition Committee.

Decides the order in which the competitors have crossed the finishing line.

His responsibility is to make sure that the boats, equipment, clothing and advertising adhere to the ICF Canoe Ocean Racing Rules, and shall mark them accordingly.

The objective of the competitor is to complete the course in the minimum possible time.