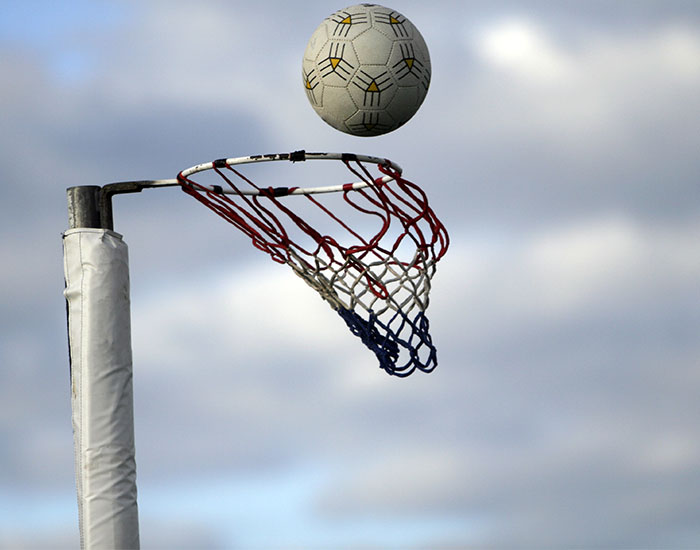 Netball is a fast and enthusiastic game which involves a lot of physical activity like running, jumping, catching and throwing. Much similar to its parent basketball, netball differs a bit in terms of rules, players' composition and equipment used. The game involves no dribbling, no running with the ball which must be passed to the teammate within 3 seconds, and 7 players on the field at the time of play. The ball and the basket are slightly smaller than basketball with no backboard; and the players too are assigned with certain areas of the netball court. James Naismith, the young instructor at the YMCA Training School at Springfield, Massachusetts, was once designated a task of discovering an indoor sport for men- the produce was basketball.

The game had the following ethics- no personal contact, no running with the ball and the goal (basket) should be horizontal and elevated. Senda Berenson who joined the college as a gymnastics instructor thought whether the same would be a good activity for females as well. She then devised women basketball. To assure the game to be womanly she prohibited the players to snatch or bat the ball from the hands of another player. To increase the speed of the game the players were not allowed to hold the ball more than three seconds, they could not even bounce or dribble the ball more than thrice. This version of the game was then named as ‘Netball’ in the 1960s. Today, more than 70 countries worldwide play this game and involve more than 20 million players.

Netball was one of the 12 sports considered to be included in the 2020 and 2024 Olympics but did not survive the first cut. Netball is played primarily in Commonwealth countries and has been part of the Commonwealth Games since 1998. Netball has never been played in the Summer Olympics, but its federation has been recognized by the International Olympic Committee (IOC ) in 1995 after twenty years of lobbying period. The netball community sees the absence of netball from the Olympics as an obstacle to the game's global growth, depriving it of media attention and funding.

From the earliest, netball was broadly acknowledged as a game suited for women. Local netball competitions emerged in a few nations amid the primary portion of the twentieth century. Beginning from the 1920s, national affiliations were shaped to organise the sport in netball-playing countries. Worldwide matches were played occasionally in the mid-twentieth century, yet were hampered by the varying guidelines in different nations.

By 1960, the principles and rules of netball were institutionalised universally. A worldwide administering body called the International Netball Federation (INF) was framed to supervise the game. The last half of the twentieth century saw global competitions expand their horizon, with the game's main global competition, the INF Netball World Cup, beginning in 1963. Netball has additionally been played at the Commonwealth Games since 1998.

The game constitutes of seven players on each side of the court. There may be up to twelve players in a team, however, there is no limit to the no. of substitutions that a team may avail.

Following are the playing positions and role of players:-

A vertical goal post situated at the center point of each goal line, consists of a metal ring from which the net hangs. Unlike basketball, the netball goalpost has no backboard.

They are made of rubber or leather, has the circumference of 69-71 cm and weighs around 400-450g. As this game can be played indoors or outdoors, the ball used is durable and waterproof.

Comfortable, lightweight shoes are worn by players that have a good grip on the soles.

The netball game can either be played on a hard or soft court with rings or scoring hoops at both the ends. Generally, the professional level games are played on a hard court which measures 100ft by 50.0ft and is slightly larger than the basketball court. The longer sides are known as the “side lines” whereas, the shorter lines are known as “goal lines” or “back lines”, the two lines that split the court into three are referred to as “transverse lines”. The court markings must not be more than 2 inches in width. The court is divided into threes which directs where the players of each position are permitted to move.

The centre circle is located at the centre of the court and measures 9 metres in diameter. There is a 4.9 metre radius semi-circle at each end of the court which is also called as “shooting circle” or "goal circle” and all the scoring shots must be taken within the same circle. The goal posts are 10 ft high from the top of the ring to the ground with no backboard. The internal diameter of the rings must not be more than 15 inches and must be placed 5.9 inches forward from the post.

Passing the ball to the teammate can be done by way of throwing or bouncing the ball but it should not be rolled. The ball can be tipped or hit with one or two hands (with an open fist). Involuntary contact with the ball by any other part of the body is not an infringement.

Shooting At The Ring

The players target for the ring on the opponent’s side. For shooting the ball it must be held over the head with open hands and should be thrown with an extension of the knees. The ideal trajectory is high with the ball falling vertically into the ring.

The defending players must stay at a distance of at least 92 cms. from the attacking players. No aggressive or intimidating gestures are allowed.

The attack aims to develop passing options from the centre pass. The player attempts to get hold of the ball in a position that is close to the edge of the semi-circle arc in order to pass it to the shooter.

The match officials include the umpire, time keepers and scorers.

The team officials are comprised of the coach, a manager, a captain and up to three other staff members, at least one of whom must be a chief care taker who must be qualified to diagnose injury and treat illness.

The points will be awarded as follows:-