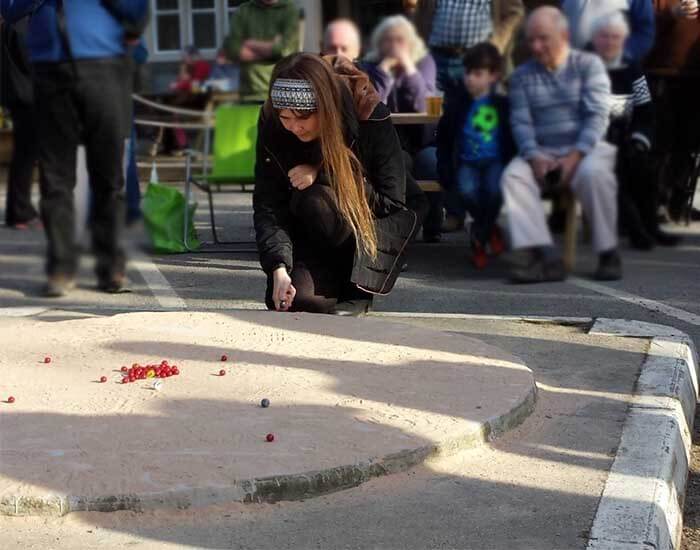 Marbles are spherical balls with uniform surface usually made from grass, agate, plastic, clay or steel. The sport of marble is referred to use these spheres for the game. In Northern England, marbles game is regarded as "Taws".

The giant marbles (taws) are referred to as "Bottle Washers" after the use of Codd-neck Bottles. In India, the sport is quite popular in which players usually object and strike on a particular marble to gain points. In India, the game is popularly regarded as "Kancha".

The game is a popular recreational activity which is played in various competitive levels.

The objective of the sport usually involves flicking one marble to hit other marbles that belong to the opponent.

The earliest record of marble tournaments was in the Queen Elizabeth-I reign in 1580 when it was conducted as a deciding trail between Giles and Hodge (2 suitors) to take the maiden of Tinsley Green's hand.

Later in 1932, the first British and World Marbles Championship was organized where participants from all around the world, participated. Since then, the sport is held annually. In 2005, the World Marble Federation organized the championship in Prague, the Czech Republic which hosted the championship till 2015. Since 2016, a Dutch Youtubers Team is organizing the Marble League. These matches are broadcasted on a popular Youtube channel known as the "Jelle's Marble Runs".

It is the giant marble, flicked by the players from a stationary position. The shots conducted in this match occur towards a bunny hole which started the game.,

In this variant, the participants aim to strike out all the marbles inside a ring with a larger marble called "Shooter" or "Tolley".

It is also regarded as "Gotti". In this game, the participants aim at a particular marble and try to hit that with shooter marble. The winner takes all the marbles. This variant is popular in India.

This variant is only prevalent in Uganda. In this game, two or more players play together and try to roll their marble near a small pit dug in the playing field. If none of the players succeeds to make any of his/her marble fall into the pit, then the participant with the closest marble lying near the pit starts the next firing session.

The objective of the sport usually involves flicking one marble to hit other marbles that belong to the opponent.