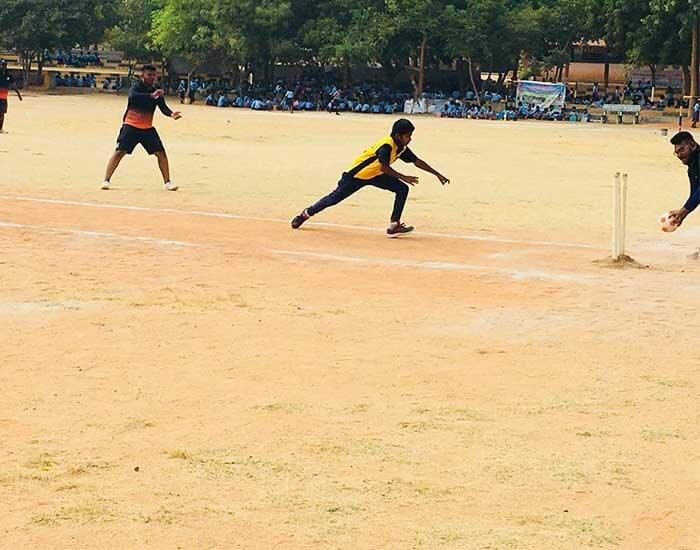 Leg Cricket is a popular game of South Asian countries such as Nepal, India, Sri Lanka and Bhutan. It’s a modern cricket, played between two teams each comprising of 11 players. The game was framed from cricket which involves the use of legs instead of a bat. The bowler rolls down the ball using the under-arm bowling, and the legsman has to hit the ball to score runs.

The objective of each team is to score more than the opponent team. The bowler aims to throw the ball in such a way that the legsman runs out by catching the ball or dismissing the wickets. The fielders, on the other hand, try to stop the ball from hitting the boundaries.

Leg cricket is played in different parts of India with slight differences in rules. In 2005, a physical education teacher in Bangalore, Mr. S. Nagraj introduced this game to some school children as a recreational activity and a source of physical fitness. The sport soon got popular among the teens and youth and was played in almost all parts of India.

A physical education teacher from Delhi Mr. Jogender Prasad Verma is also responsible for making the game popular with his intensive research and implementations. In 2010, he introduced the official rule book of leg cricket, that are still followed nationwide.

It was the effort of Mr. Verma and his team that at present leg cricket is widely popular and still played in India, Pakistan, Srilanka, Bhutan, Nepal, Bangladesh, Florida and Ghana.

Today Mr. J.P. Verma and Mr. S. Nagrajare are regarded as the Fathers of leg cricket. Mr. J. P. Verma is the current Secretary of International Leg Cricket Council and the Leg Cricket Foundation of India.

In 2012, the senior National T-10, leg cricket championship was organized by the Leg Cricket Federation of India at the Rajiv Gandhi Stadium at Bawana district, Delhi. In the first event, a total of 24 teams participated, including both the girls and boys. Since 2012, the Leg Cricket Federation of India has organized 6 national games in Delhi, Maharashtra, Tamil Nadu, Jharkhand, Haryana, Uttar Pradesh and Madhya Pradesh.

In July 2013, the Indian team was the winner of the first Indo Nepal T-10 Leg Cricket Series and the runner-up at the 1st South Asian Championship, held in Kathmandu, Nepal in 2016. From 2012 to 2015, three national championships, two Indo-Nepal and Indo-Bhutan Series of leg cricket were conducted.

The objective of each team is to score more than the opponent team. The bowler aims to throw the ball in such a way that the legsman runs out by catching the ball or dismissing the wickets. The fielders, on the other hand, try to stop the ball from hitting the boundaries.