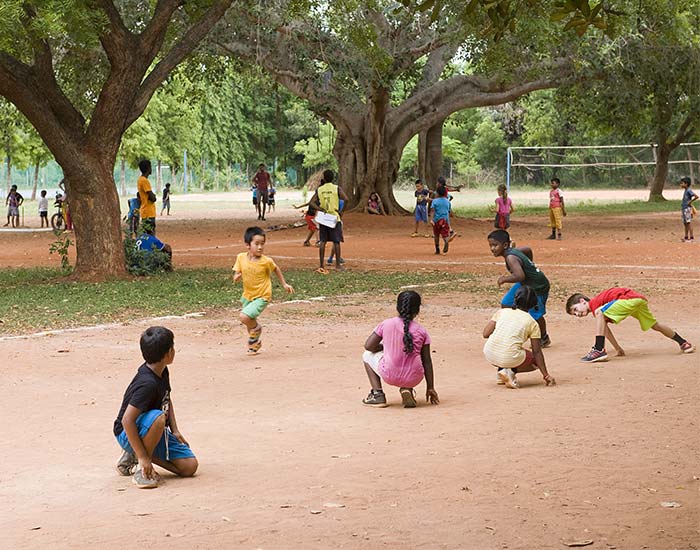 (a) There are two teams each comprising of total 12 members. The game has four quarters/turns, each of 9 min.

(b) There are only three members of the running team on the field while the eight members of the chasing team take a knee-down position on squares that are drawn through field lines in a preset area between two poles. They sit facing in opposite directions in the cross-lane without cutting the line. One member who is called 'chaser' stands near one pole to chase the runners first.

(c) The chaser has to touch or tap the runners whereas the runners try to defend themselves from the chaser to get touched. When the chaser touches all the three runners, three new runners (of the running team that wait in the entry zone area) enter the field, and the game continues.

(d) The chasing team members take positions on the cross-lane whereas there are three runners on the field who can run in a field-range determined by two poles. The runners are allowed to run over the cross-lane or change their moving direction while running.

(e) The chaser is not allowed to run over the cross-lane or to change the direction while chasing the runners. If it is needed, he has to touch the pole, turn back and continue chasing.

(f) Each time, the chaser touches a runner, a point is awarded.

(g) The chaser can pass-on his turn to any other sitting player by tapping from behind by pronouncing a term 'Kho'.

(h) There are fouls for early Kho, touching without saying Kho, changing direction by the chaser, cutting the cross lane while chasing, getting up without receiving a Kho, or late Kho.

(i) If there is a tie, an extra turn is performed in which the winner is one that takes less time to touch one runner on the opposite team.