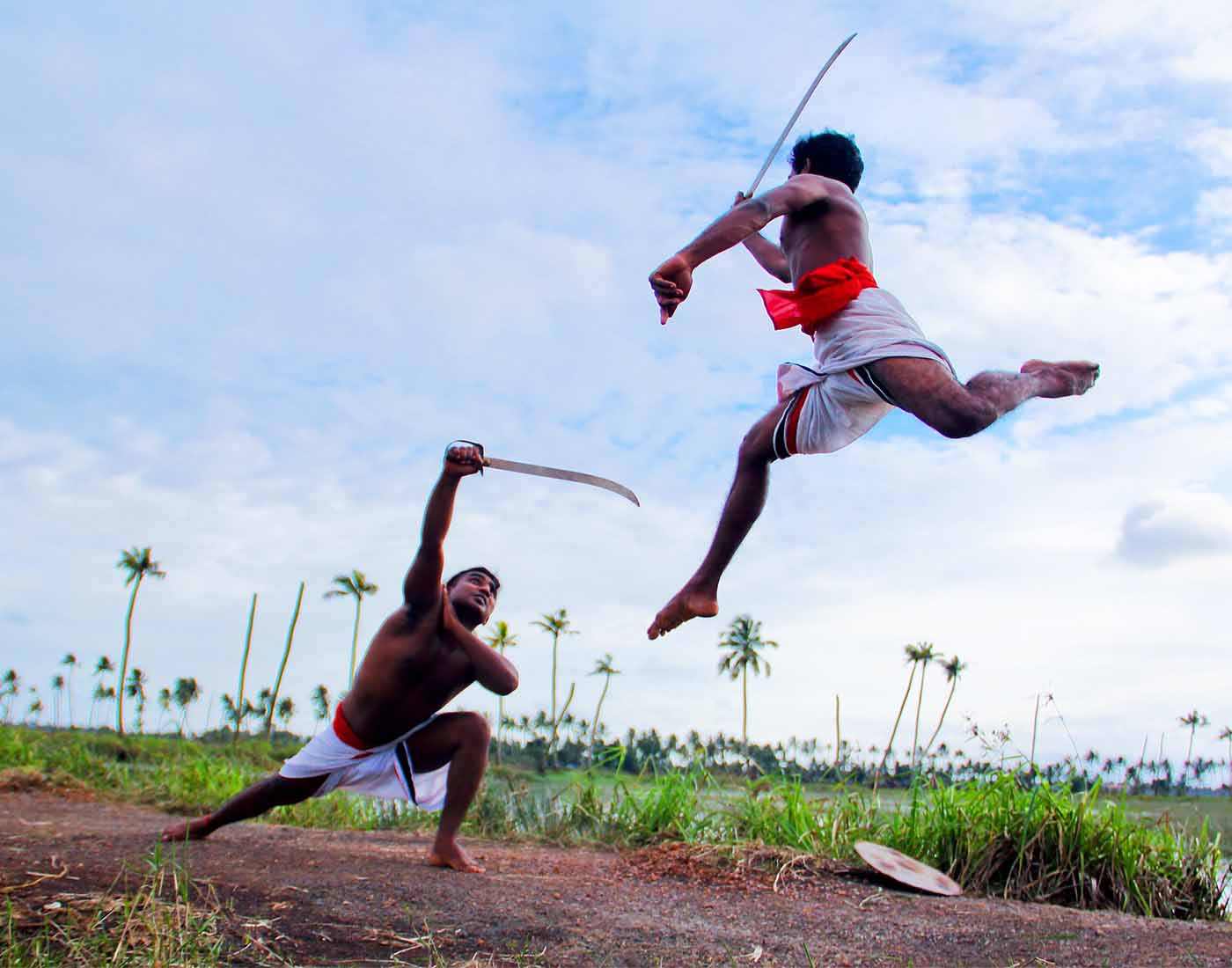 Kalaripayattu is a famous ancient Indian martial art form which hails from the state Kerala. It is one of the oldest martial art forms that has survived a long historical period and is still having its strong existence.

The form was mentioned on a popular Malayalam Ballads collection Vadakkan Pattukal. The Kalari word means battlefield and the act was developed earlier as a combat technique for the battlefield. This form of martial art is performed with the aid of weapons by some unique and defensive fighting techniques.

Kalaripayattu includes knowledge of yoga, asanas along with the values of Ayurveda. According to Indian mythology, Saint Parasurama, an avatar of Lord Vishnu was the founder of the Kalaripayattu.

It includes strikes, kicks, weaponry etc. It brings the body to a higher state of consciousness and explores potentials of an individual mentally, spiritually and physically.

The major objective of the sport and the players involved in the sport is to use all the weapons such as vel (spear), Val (sword), kedaham (shield) along with a vil ambu (bow and arrow) to defend themselves from the opponent.

The first-ever source of Kalaripayattu was found in the Sangam literature, where the use of various spears, swords, shields, etc. are mentioned. The warriors or the military soldiers (Chekavar) were the major Kalaripayattu practitioners.

According to various ancient records, Sage (Rishi) Agastya was regarded as the creator of the Kalaripayattu martial arts. Still, it is controversial whether Lord Parasuram founded it first or Sage Agastya. In the 5th or 6th century Bodhidharma, the Buddhist monk obtained his training in Kalaripayattu. With his visit to various Shaolin temples, several other monks used to learn his teachings about these martial arts.

With further evolution in Kalaripayattu, it became a modified version and is regarded as the Shaolin Kung Fu. The techniques combine steps known as Chuvadu and postures, referred to as Vadivu. The techniques are named after many animals, presented in a total of eight forms. The attacking on marmam (vital points) is identified in the 6th century by Sushruta mentioned in Sushruta Samhita. It formed the basic combat floor which is followed over all the years.

By 1920 in Thalassery, Kalaripayattu gained lots of public interest throughout southern India. Since 1964, it has also appeared in various films and TV series.

It includes Alankara Kai where the participant involves hand decoration and hand fighting as Anka Kai. It's popularly found in South Canara and Shimoga of Karnataka.,

This form of Kalaripayattu is widely practised in Kottayam and Pathanamthitta of Kerela. It involves various movements that are skillfully patterned. These patterns are regarded as Kalam. Chumattadi is an important technique used in this form which is a crucial hand combat technique.

The southern style is regarded as the purest Kalaripayattu form and is also regarded as Adi Murai. It is considered as the most dangerous and intense form, which includes disabling and sometimes death of the trained opponents. It's still practised in the southern region of Kanyakumari and Ambasamudram of Tamilnadu, India.

The major objective of the sport and the players involved in the sport is to use all the weapons such as vel (spear), Val (sword), kedaham (shield) along with a vil ambu (bow and arrow) to defend themselves from the opponent.

It includes strikes, kicks, weaponry etc. It brings the body to a higher state of consciousness and explores potentials of an individual mentally, spiritually and physically.