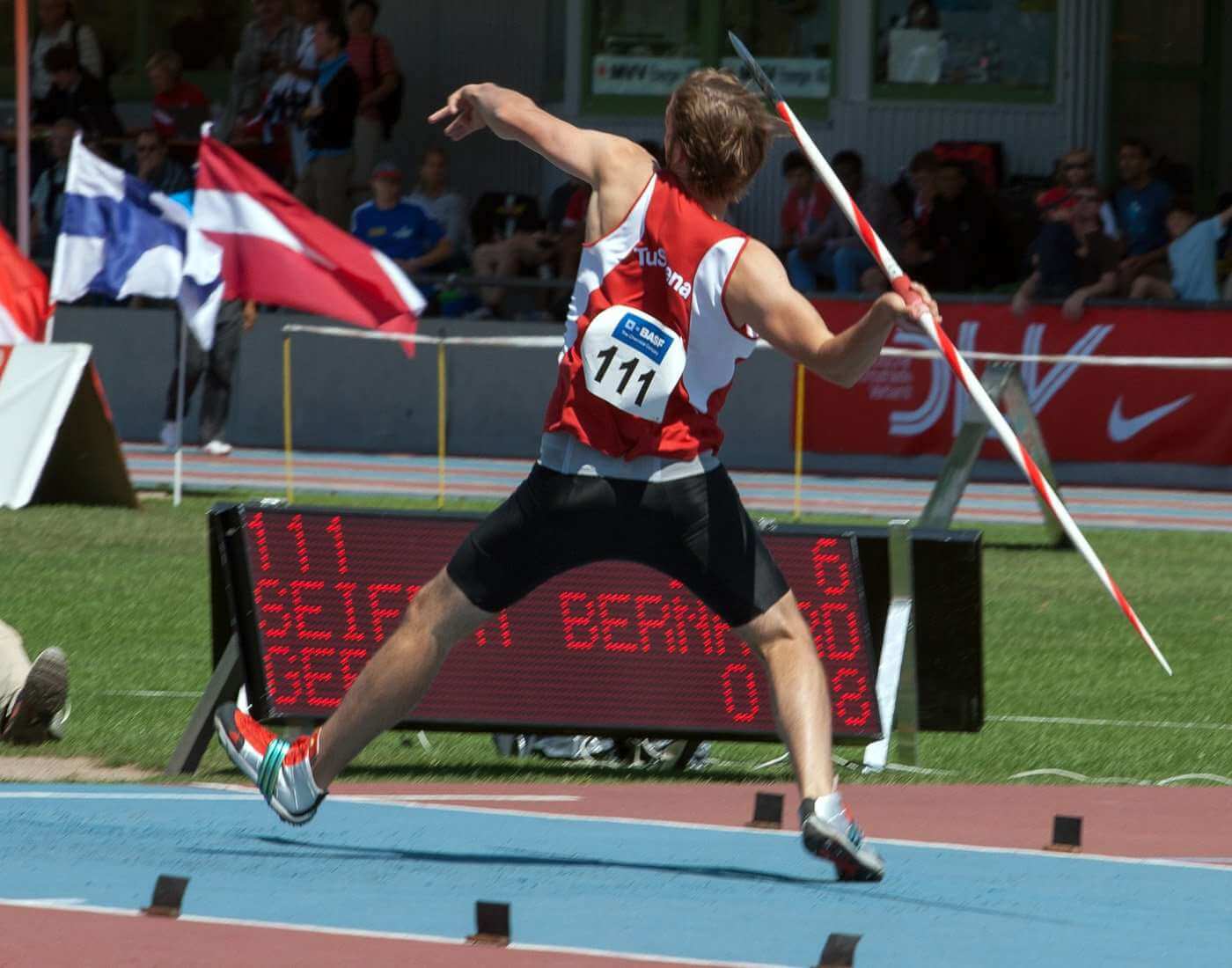 Javelin Throw is a track and field athletic event in which a Javelin, a spear, is thrown from a predetermined area by running from a distance of their choice to gain maximum momentum and speed. Javelin throw event is added in both Men’s Decathlon and Women’s Heptathlon.

The Javelin Throw was added to the Ancient Olympic Games, Olympia, a sacred site located near the western coast of the Peloponnese peninsula in southern Greece as part of Pentathlon in 708 BC. This included two events, one for distance and the other for accuracy in hitting a target. Throwing the Javelin as a sport evolved from the everyday use of the spear in hunting and warfare.

The earlier Javelin throw took place with the aid of a thong (ankyle in Greek) that was wounded around the middle of the shaft. The athletes held the Javelin by the ankyle and then released the shaft which gave the Javelin a spiral trajectory (the path followed by a projectile flying or an object moving under the action of given forces.)

Throwing Javelin-like poles into targets was revived in Germany and Sweden in the early 1870s. In Sweden, it became as a common event by throwing them for distance and later got introduced in Finland in the 1880s. Sweden’s Eric Lemming, threw his first world’s best in 1889 and ruled the event from 1902 to 1912. When the men’s Javelin got introduced in the 1906 Intercalated Games, Athens, Greece as an Olympic discipline where Lemming broke his own world record by setting a new best. Later in 1912 Olympics, he made his personal best of 62.32 meter which was recognized as the first Javelin world record by the International Association of Athletics Federations.

The women’s event was first recorded in Finland in 1909. Usually at that time the women threw the Javelin of same kind as men’s but later on shorter and lighter Javelin for women was introduced in the 1920s. The women’s event made its debut in the 1932 Olympic Games, Los Angeles in which Mildred “Babe” Didrikson of the United States became the first champion.

The Javelin throw later became part of the Decathlon since its introduction in the early 1910s.

Two-Handed Throw was used to throw Javelin in the late 19th and early 20th century. In this type of throwing style the competitions included throwing with right-hand and left-hand separately and the best marks of each hand were added together and then the winner was declared. Moreover, Finland swept all the medals in the two-handed throw in 1912 Olympics, Stockholm, Sweden when the event took place for the first and last time.

Freestyle Javelin was the throw in which holding the Javelin by grip at the center of gravity was not mandatory. This event took place as a freestyle competition in the 1908 Olympics, London, England but was later dropped.

The main objective of Javelin Throw is to throw a spear-like structure also known as the Javelin with bare hands with maximum force so that it lands on the prescribed marking area. This sport requires constant practice and ability of judging angle, speed and distance to play the game efficiently.

1) Shoes: Leather or nylon shoes with a maximum of 11 front and rear cleats (12mm long) are worn during Javelin throw.

2) Clothing: Athletes wear lightweight sleeveless or short-sleeved T-shirts or top. The shorts may be tight fitted to support the thighs.

3) Javelin: It is a light spear which is divided into three parts - tip, shaft and cord grip. It is designed to throw as a sport event but earlier was used as weapon in war and for hunting purpose. Its overall length must be at least 260 cm (102.4 inches) and its weight at least 800 grams (1.8 pounds). The women's Javelin is somewhat shorter and lighter—a minimum 220 cm (86.6 inches) long and 600 grams (1.3 pounds) in weight.

The minimum length of the runway should be 30 meter (98.42 ft.) and maximum it should be up to 36.50 meter (119.75 ft.). It is marked by two parallel lines whose length is approximately hundred meter (328.08 ft.) and they are separated by a distance of four meter (13.12 ft.). Javelin throw is the only sport in which the competitors are not confined to a circle but have to run along the runway to throw the Javelin.

This is a curved arc of a circle having 8 meter (26.24 ft.) of radius and is located at the end of the runway. The strip is made up of white paint with a width of 70 mm (2.75 in.). The athletes should not step on or beyond the arc at any point while throwing the Javelin or after the throw.

Athletes gain momentum by running over a short distance. In the last few strides, the athletes cross legs in preparation for getting maximum torque on the throw. At last, they untwist the legs and pull back the throwing arm and push the other arm forward to help their aim and follow-through.

The Javelin must be held with its grip and horizontally in the palm with the palm facing up always. There are three main styles of gripping:-

Just before throwing the Javelin, the athlete keeps the Javelin behind his/her shoulders for as long as possible, then stops suddenly and thrusts the throwing arm forward to achieve the greatest possible speed of throw.

Javelin throw is played in all the competitions whether held at schools, colleges, national or international levels as per rules and regulations.

As we know that the front part (tip) of the Javelin is too sharp so it becomes even more important to keep safety measures inconsideration.

Some of the important safety measures: