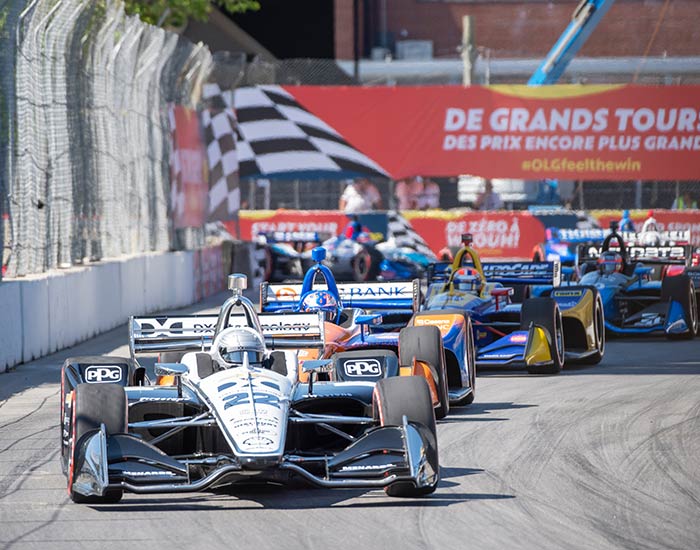 The IndyCar Series is the premier level of open-wheel racing and one of the most popular spectator motorsports in the United States, with races attracting bumper crowds to watch exciting and often hard-fought competitions. Races vary in length, the longest being the internationally famous 800km Indianapolis 500.

IndyCar racing has its origin at the Indianapolis Motor Speedway course. For many years, Championship Auto Racing Teams (CART) ran Indy car racing, but after an acrimonious split in 1994, the "Indy" name was taken by the Indy Racing League. CART now runs the Champ Car World Series, an Indy format similar to F1.

Drivers wear a HANS (Head and Neck Support) device to protect and support their head and neck. It is U-shaped device, supported by the shoulders that keep the head from whipping forward and backward in case of a crash.

Drivers wear a full-face helmet with visor made of a composite material like Kevlar or carbon fiber with hard shell for protection against injuries.

Drivers wear fireproof shoes made of soft, cushioned leather that have thin rubber soles to provide good grip and slip-free control on the pedals.

Drivers wear a one-piece driving suit made of fire retardant fabrics like Nomex that must protect a driver from third-degree burns for a period of at least 12 seconds. Long flameproof underwear beneath the suit provides extra fire protection to the drivers. The suit has two large handles on the shoulders that enable the driver to be lifted free in case of an accident.

These are open-wheel single-seat cars with an open cockpit and outboard wings at front and rear and are heavier and sturdier than the formula one cars. The engine of indy cars are usually 3.5 litre V-8s and are fuelled by ethanol. The car's minimum weight must be 708kg for oval-racing and 726kg for road racing.