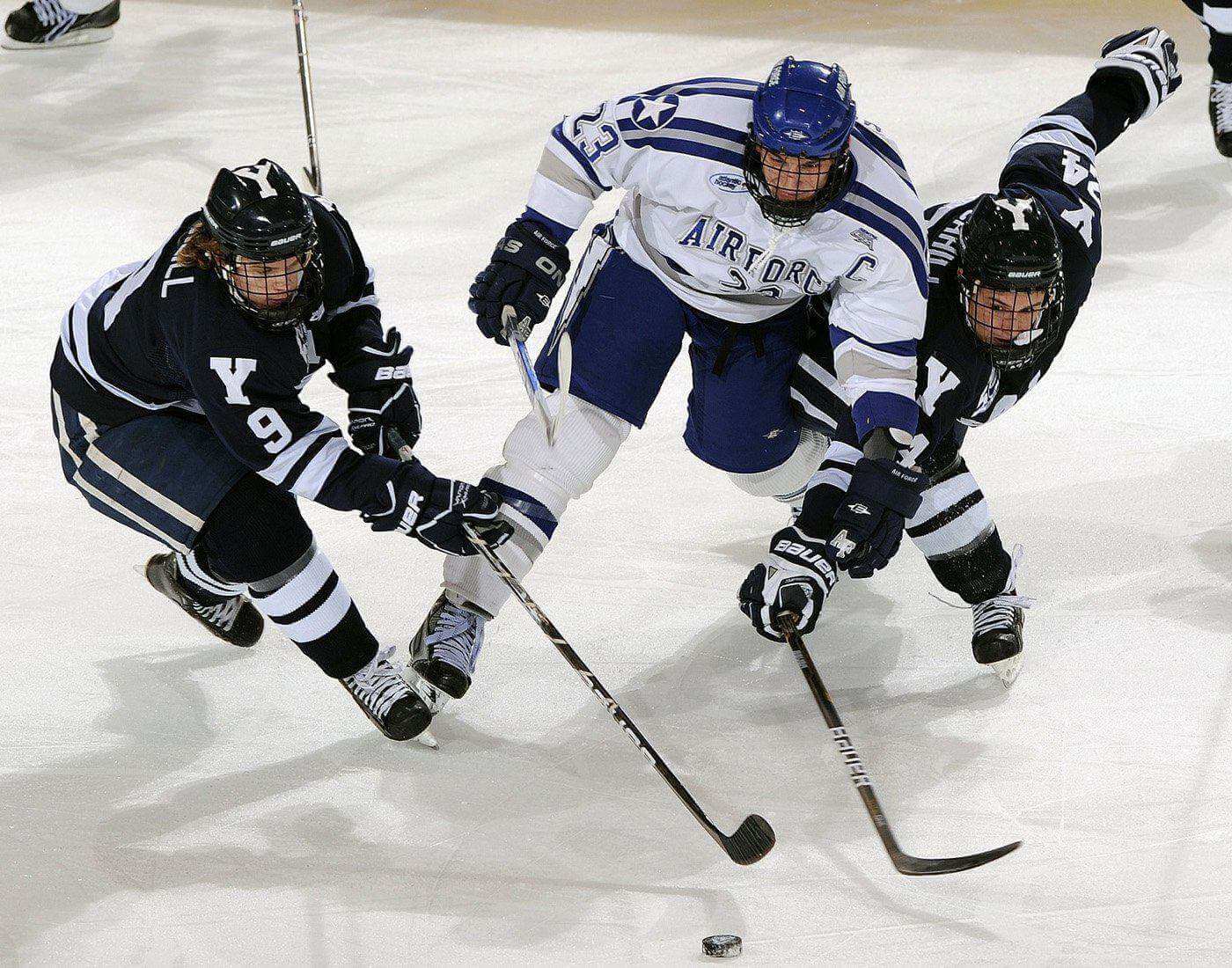 Ice Hockey is a team sport played between two teams of skaters on an ice rink and is the world’s most popular winter sport. In this sport, players use their sticks to shoot a puck into the opponent’s goal to score points. Ice hockey is the national sport of Canada for winters.

The sport is believed to be originated in the mid-1800s in Canada, but some believe that it was evolved from a stick and ball game played in the 18th and 19th century in the United Kingdom. In the international competitions of ice hockey, six countries predominate- Canada, Finland, Czech Republic, Sweden, Russia and the United States. Ice hockey is the part of Olympics since 1920.

To score more goals (points) than the opponent team by shooting the puck legally into the opponent’s goal.

Ice hockey is believed to be evolved from the very basic stick and ball games played within the eighteenth and nineteenth-century UK et al. These games were then introduced to North America and hence several other informal winter games were developed, like "shinny" and "ice polo". The current sport of ice hockey was developed in Canada, most notably in Montreal, where the first indoor hockey match was played on March three, 1875. Some characteristics of that game, like the length of the ice rink and the use of a puck, are still maintained to the present day.

Amateur hockey game leagues began within the Eighteen Eighties, and pro hockey games originated around 1900. The Stanley Cup, emblematic of hockey game club ascendence, was initially awarded in 1893 to acknowledge the Canadian amateur champion and later became the championship trophy of the NHL. In the early nineteenth century, the Canadian rules were adopted by the Ligue Internationale Delaware Hockey Sur, the precursor of the IIHF, and therefore the sport was played for the first time at the 1920 summer Olympics.

The first skates had straightforward metal blades tied to regular shoes. The sticks were skinny items of wood till the nineteen thirties. In 1897, G.H. Merritt introduced the simple goalie pads by wearing the wicket-keeper's pads.

All players vied in simple leather gloves, until a goalie from Detroit introduced the trapper and blocker style of gloves in 1948, by experimenting with a rectangular piece of leather, and a baseball catcher's glove. Jacques Plante was the first person to use the goalie mask regularly while Clint Benedict used a crude animal skin version in 1928 to safeguard a broken nose.

The goalie mask then evolved to Vladislav Tretiak style - the first helmet and cage combination. Thought as primitive in today's customs, that kind of mask was still used by Chris Osgood. The other helmet and cage combo, which were last used by Dominik Hasek and Dan Cloutier, are usually questioned, indicating safety considerations.

Pond hockey is a kind of ice hockey usually vied as pick-up hockey on lakes, ponds and artificial outdoor rinks throughout the winter. Pool hockey is often spoken in hockey circles as 'shinny'. Its rules dissent from old hockey since there's no hitting and remarkably very little shooting in it, inserting more considerable stress on passing, puckhandling and skating talents. Since 2002, the globe pool Hockey Championship has vied on Roulston Lake in Plaster Rock, New Brunswick, Canada. Since 2006, the United States pool Hockey Championships are competed in Minneapolis, Minnesota, while the Canadian National pool Hockey Championships have vied in Huntsville, Ontario.

According to IIHF rules, ice hockey rinks are 60 m long and 25-30 m wide with the corner radius of 7-8.5 m. The rink is divided lengthwise by five lines- two icing lines (goal lines), two blue lines and a center red line.

The distance between the end board and the goal line is 4m and between the end board and the blue lines is 22.86m at both ends of the rink. The rink has a center faceoff spot and a center faceoff circle having a diameter of 9m. There are two face-off spots in each team’s defensive zone and two in the neutral zone. Both sides of the court consist of a goal which is 48 inches tall and 72 inches wide.

Two teams of six players each including the goaltender compete against each other to win the match.

A helmet with strap, and a face cage or visor, is needed of all ice hockey game players. Ice hockey helmets are made from a rigid but versatile thermoplastic outer shell, sometimes nylon or ABS, with firm vinyl nitrile foam padding within to cut back shocks.

A neck guard generally consists of a series of nylon or ABS plates for puncture resistance, extra padding for comfort, and tear-resistant nylon mesh as an outer covering. For goalies, the neck defender is typically a curved panel of clear Lexan and hangs just beneath the mask from nylon cords, somewhat within the manner of a metal military armour plate. Both are supposed to cut back the potential for injury to the neck or throat by a puck or skate blade.

Hockey shoulder pads are generally made up of a passed vest with front and back panels, and velcro straps for closure, and soft or hard-shelled shoulder caps with elective connected higher arm pads. These pads primarily defend the chest, ribs, abdominal nerve plexus, spine and shoulders against flying pucks and collisions with different players or the ice.

Standard Ice hockey gloves are made with thin leather, with this providing a lot of padding considerably to the skin of the hands; the gloves conjointly reinforce the thumbs to stop them from bending backwards.

It's a protecting cup that is intended to shield the reproductive organ. The cup simply fits into a strap or some sort of sports support. Similar clothes, referred to as "pelvic protectors" or informally "jillstraps", have a tough shell protecting the female sex organ and their lower pelvis from an impact.

The shinpad encompasses a hard plastic shell on the front and outdoors to shield against pucks, however sometimes has very little or no protection on the calf. Shin guards defend the knee and therefore the frontal bones of the leg from pucks, sticks, skates, falls and different impacts.

Hockey skates have a rigid shell, form-fit to the player's foot by utilising memory foam and/or heat-moldable elements, typically strengthened with metal mesh to stop a skate blade cutting through. Not like figure skates, hockey skate blades have a rounded heel, and no toe picks as these may be dangerous in a very "pile-up".

A hockey puck is a vulcanised rubber disk three inches in diameter, one inch thick, and a half dozen ounces (170 g).

Made from wood or composite materials, hockey sticks are available in numerous designs and lengths. Stick dimensions may vary according to the scale of the player. Historically, all sticks were wood up till the late 1990s; wood is cheap and sturdy. However, the characteristics of every stick were subtly different thanks to tiny changes within the grain structure. Also, they enabled less flex before breaking.

The first advanced hockey game sticks are made of black lead and are factory-made with precise flex patterns that provide a lot of accuracy and power once touching the puck, but these benefits go along with a flip aspect of inflated price value and somewhat lower overall sturdiness.

Incorporates a bigger blade than player sticks yet as a widened flat shaft. These are just about continually made from wood for sturdiness, as opposition the carbon-fibre construction of new player sticks, however, might have fibreglass or carbon-fibre panels on the blade and shaft for inflated impact resistance.

Thicker blade with a bigger blade radius and less ankle support permits a goalie to slip off his skates to create "pad stops". The boot is nearer to the ice surface than an everyday hockey skate to stop pucks from sliding through the space between the boot and skate blade. Traditional hockey skates are technically allowed as they supply propulsion and adequate protection, however, are just about never seen.

Masks are fitted to the player's face and might stand multiple high-speed impacts from pucks.

Paddings made up from a lot of thick, cushiony material within the front than a player's shoulder pads, conjointly incorporating forearm, elbow and skeletal muscle protection.

A glove which is worn on the hand that holds the stick, with a rectangular pad on the rear, accustomed to deflecting shots and is known as blocker.

A glove which is worn on the other hand, accustomed to collect the puck from the ice or catch a flying shot.

May be the first visible part of a goalie's instrumentation, goalie "legs" are thick and cushiony, flat-faced leg pads covering the highest of the skate, the player's shin and therefore the knees, and incorporate further padding on the within of the leg and knee. Pads are eleven or twelve in (279 or 305 mm) wide and sized to suit the individual player's legs.

Higher pelvic protection and a lot of padding ahead of the cup than a player's jock. It helps in providing lower abdomen protection and building a larger/stronger cup.

To score more goals (points) than the opponent team by shooting the puck legally into the opponent’s goal.