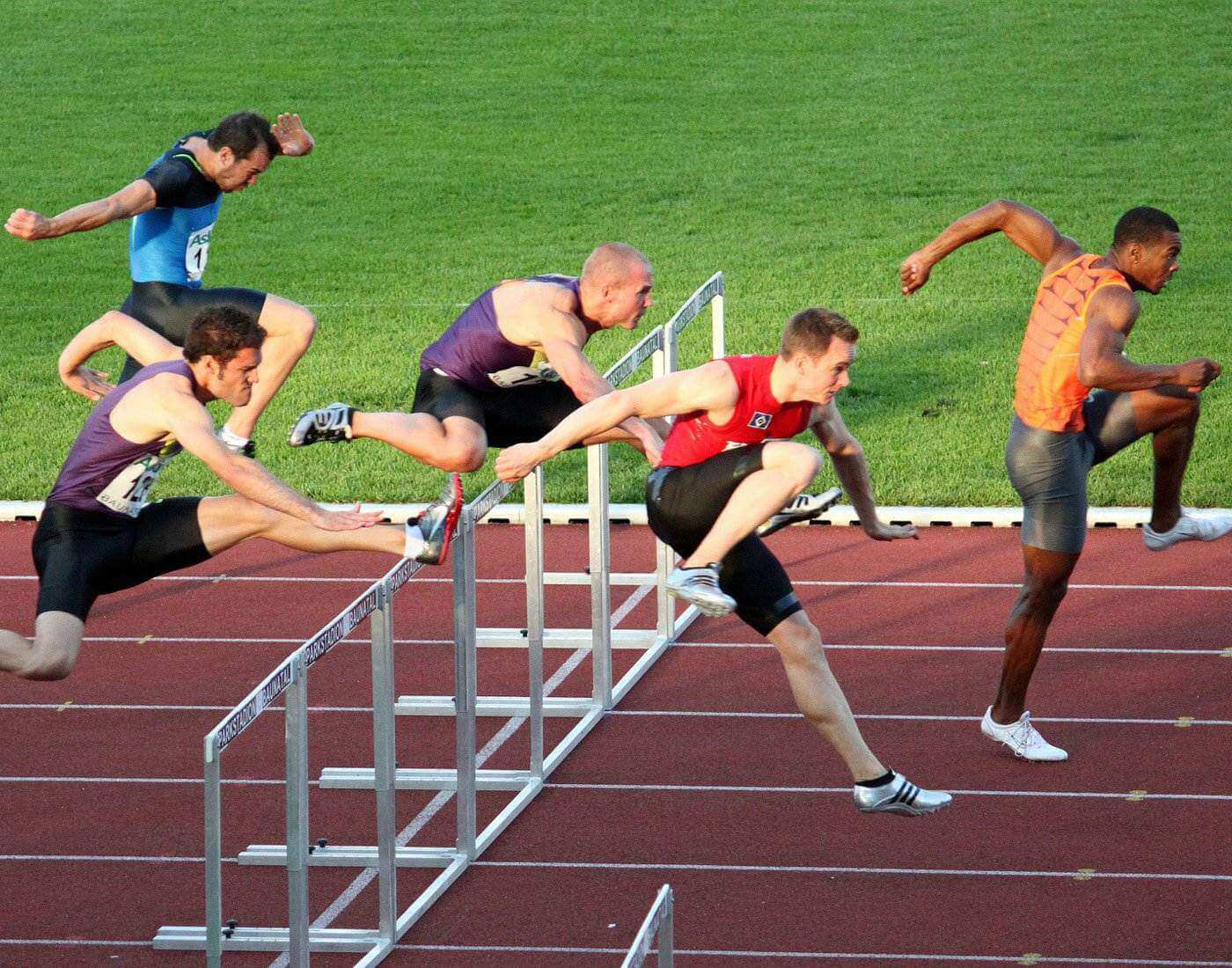 Hurdling is a type of jumping in which an athlete jumps over an obstacle at a high speed or in a sprint. Hurdling is a highly specialized form of obstacle racing that is part of the sport of athletics. Moreover, the hurdling events, barriers or obstacles are known as hurdles that are set at a defined distance according to the event.

The main objective of the athlete is to run over a precise distance with full stamina and cross the finish line in the fastest possible time over going hurdles.

The International Association of Athletics Federations (“IAAF”) organizes athletic championships throughout the world and is the only global governing body. The Male and female athletes compete as individuals belonging to different countries.

In the early 19th century, hurdlers ran and jumped over each hurdle earlier known as burgles. In 1902, Spalding Equipment Company sold the first Hurdle called ‘Foster Patent Safety Hurdle’ and that was a wooden hurdle. In 1923, some of the wooden hurdles had weighed about 16 lbs. each. Later on, with passing time the hurdles design had gone through improvements that were made in 1935, when for the first time they developed the L-shaped hurdle.

The improved design that is the L-shaped was preferred over other shapes because with this shape, the athlete not only hit the hurdle but it would even tip down helping in clearing the athlete’s path.

The event became popular from the wooden barriers that were placed along a 100 yard stretch in England during the 1830s. The 100 meter hurdle was featured for the first time during the Women's World Games held at Pershing Stadium in Paris in August 20, 1922.

The event became popular from the wooden barriers that were placed along a 100 yard stretch, in England during the 1830s. The Oxford and Cambridge universities had developed the event, increasing its distance to 120 yards (109.7 m) which later was rounded up to 110 m by the French in 1888. This discipline was added in the 1896 Olympics held at Athens, Greece as a Men’s event.

The very first 440 yard hurdles race was conducted at Oxford, England in 1860. Competitors had to confront 12 huge (100 cm / 39 inch) wooden barriers that were sunk into the ground.

The 400 m hurdles became a standard discipline for men at the 1900 Olympics, held at Paris, whereas in case of women it was included as an event after 84 years. Nawal EI Moutawakel of Morocco won the inaugural women’s Olympic title in 1984, Los Angeles and became the first female Olympic champion to win an Olympic gold medal for an Islamic nation.

The well-known hurdles events are 110 meters for men, 100 meters for women and 400 meters for both men and women. These events take place at the Summer Olympics and at the World Athletics Championships.

The sprint indoor hurdle race is usually 60 meters for both men and women, although races of 50 meters or 55 meters long are also conducted especially in the United States. The 60 meter indoor race is run over 5 hurdles. Sometimes a shorter race may occasionally have only 4 hurdles.

In some outdoor races a long hurdle race is sometimes shortened to 300 meters for younger participants that are conducted over 8 hurdles. This race takes place for high school and middle school athletes instead of 400 meter hurdles in California, Minnesota and Pennsylvania states of the United States of America.

Other than the outdoor hurdles event, some are commonly held as indoor track and field events that range from 50 meters onwards. In the past, women have competed in the 80 meters hurdle event at the Olympics in the mid-20th century. Moreover, the hurdle races are also part of the combined events that are in the decathlon and heptathlon.

Events from 50 meters to 110 meters are usually known as high hurdle races having 10 hurdles while longer competitions such as the 400 meter hurdles are known as low hurdle races with 10 hurdles in between the start and end.

Earlier in the 1900 and 1904 Summer Olympics athletics events, 200 meters low hurdle event was organized. These hurdle events were widely participated in the early part of the 20th century especially in North America. Furthermore, apart from these two Olympic Games, this sport was not included in other international competitions and after 1960s this sport got vanished except in some places such as Norway.

The variant of hurdles is commonly known as Shuttle Hurdle Relay races. These types of track meets are usually conducted in relay races. In a Shuttle Hurdle relay, each of the four hurdlers in a team run in the opposite direction from the preceding runner. The standard races are similar to the sprint relay races: 4 × 110 m for men and 4 × 100 m for women.

Shuttle Hurdle Relay usually has four teams as the track has only eight lanes. In these eight lanes, two lanes are taken up by each team. The 1 and 3 number runners in the team run in one direction down one lane and the 2 and 4 number runners run in the opposite direction in the other lane.

Instead of using batons, the runners wait for their teammate to finish a certain point to start off their part but if they start too early they would be disqualified.

Shuttle Hurdle Relay was introduced at the 2019 IAAF World Relays, in which two men and two women in each team run 110 hurdles.

A pair of lightweight, no heel shoes with shorter cleats in the front is used that provides traction.

Sprinters wear a pair of tight-fitting shorts and a short-sleeved or sleeveless T-shirt or a top indicating the athlete number.

1) On Your Marks: At this point the athlete is focused on the track, with his / her feet placed in the blocks and fingers on the ground behind the starting line.    Note: The hands should be placed such that they are slightly away from the shoulder width with muscles relaxed.

2) Set: On the “set” command, athletes raise their hips a little higher than the shoulders. In this position the runner concentrates deeply and holds the breath so that he can propel his body forward at the start.

4) Block Start: The starting blocks must be positioned in a way so that the athlete approaches the first hurdle leading on his/her desired leg without inserting a stutter step.

4) Launching at the hurdles: Athletes cross the hurdles by launching at it from 6-7 feet away. Athlete’s lead leg extended yet slightly bent while the trail leg is tucked in flat and horizontally, close to the side of the hip. The objective of this technique is to reduce the time spent flying through the air.

5) Running technique: In hurdle races, athletes must stay on the balls of their feet throughout the race which ensures a fluid movement between every stage of the race.

6) Three-step technique: This technique is used in 100 and 110 meter hurdle events in which three long steps are taken in between all the hurdles. The fastest hurdlers use this technique to maintain their speed throughout the race.

7) Finish Line: The timer is stopped only when the athlete’s chest crosses the finish line (The rule that came into force in 1932 Olympics held at Los Angeles).

These races take place over a 100m straight track consisting of ten 2 feet 9 inches hurdles spread over the track. The first hurdle is 13m from the start, and then a distance of 8.5 m between hurdles thereafter and the last hurdle is 10.5m from the finish.

These races take place over a 110m straight track consisting of ten 3 feet 6 inches hurdles spread over the track. The first hurdle is 13.72 m from the start, and then a distance 9.14 m between hurdles thereafter and the last hurdle is 14.02m from the finish.

These races cover one whole lap of the 400-meter track consisting of ten evenly-spaced hurdles over the track. The men’s hurdles are 36 inches high while those of women are 30 inches high.

At major championships, the format of the 100 m, 110 m and 400 meter hurdles is typically heats, semifinals and final. The finishing time is determined by the time taken to complete the race and the athlete (men / women) who complete the race first is declared as the winner.