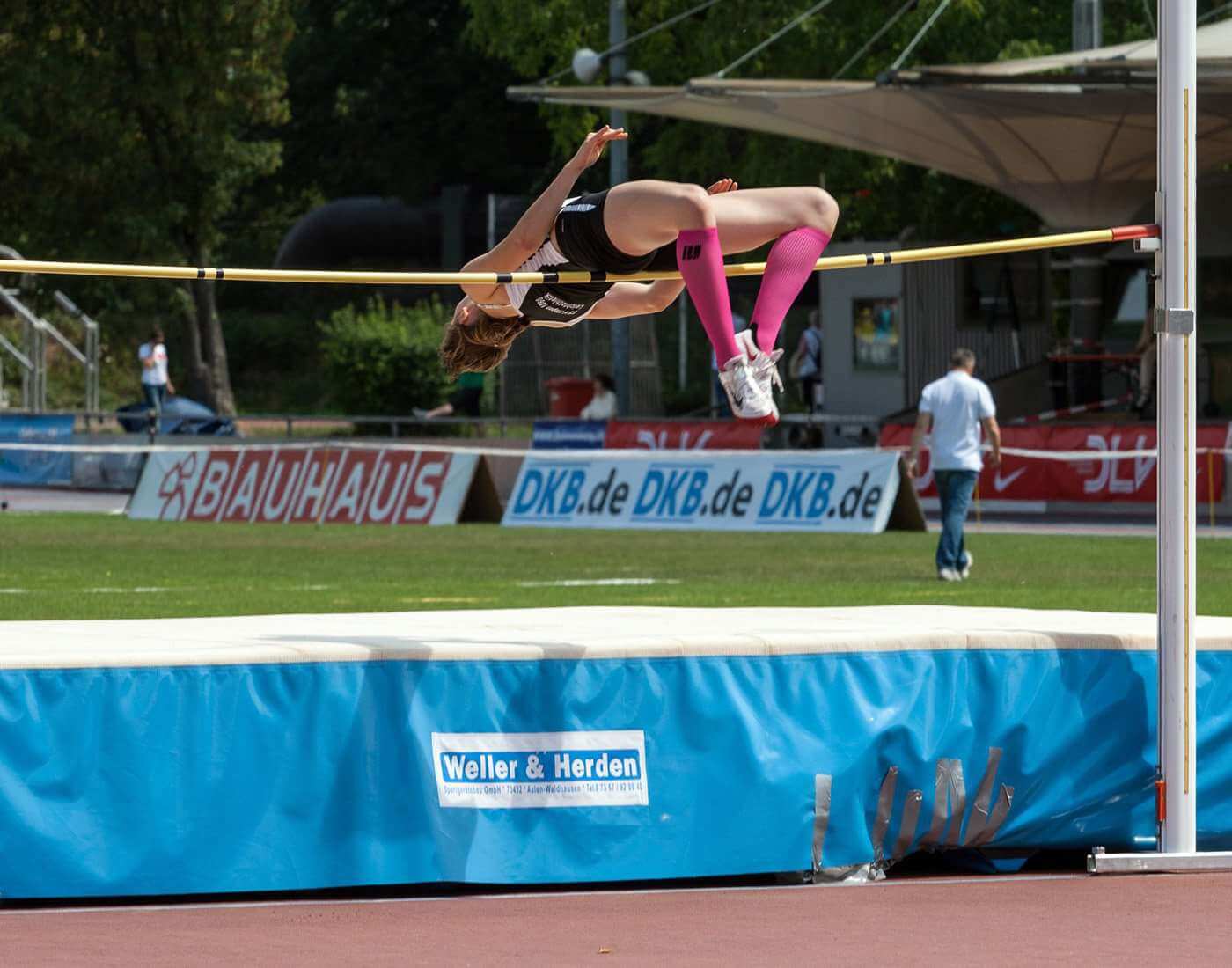 High Jump is a track and field athletic event in which athletes jump unaided over a four-meter long horizontal bar placed at predetermined height without dislodging it. High jump and pole vault events are together referred as "vertical jumps".

The first recorded high jump events took place in Scotland in the 19th century. From that time, the techniques used in this event have gone through a series of changes.

This technique was first used by the early jumpers over the 19th century. This is an introductory technique now commonly used by the young athletes as this lets them gain confidence and moreover it is user-friendly. In the scissors high jump, the athletes do a straight thirty degree angle running to the bar. Then the athlete goes over the bar by placing the leg closest leg over the bar and then followed by the other leg. The main point of the scissors technique is that the athletes land in standing position on their feet over the mats.

In the eastern cut-off technique the athlete rotates the trunk into a horizontal position at the peak of a jump. The athlete lifts the pelvis part higher than the simple scissors technique. This ultimately results in a higher bar clearance. The only draw-back of this technique is that this requires tremendous flexibility for higher jump.

In the western roll technique the athlete clears the bar from his / her side such that the takeoff leg is tucked under the rest of the body. This technique probably did not improve much the effectiveness of the bar clearance when compared to eastern cut-off. Moreover, it did not require very much flexibility. The only benefit of this was that it helped a larger number of athletes in clearing the bar.

In this technique the athlete clears the bar with facing down and the body stretched along the bar. In straddle technique the part of the leg is lower than the bar at the peak of the jump. This allows the pelvis to rise to a greater height with improved effectiveness of the bar clearance.

Later on, High Jump became part of the 1896 Summer Olympics  held at Athens, Greece for Men and in 1928 the women’s event was added to the Olympics held at Amsterdam.

The main objective of this sport is that, the athlete needs to jump over a crossbar that is placed over a certain height without touching it. The crossbar should not be knocked down from its position during the overall process.

Since, the high jump event was added to the modern Olympics in 1896, the popularity and demand of this game grew among the various nations with the passing time. At present, the male and female athletes participate individually in the high jump events.

Crossbars are made of lightweight material such as fiber-glass or aluminum having a length of approximately four meter (13.12 ft.) and twenty nine to thirty one millimeter (1.14 – 1.22 in.) in diameter. Its maximum weight is up to two kilogram (70.54 oz.)

Jumpers wear sprinting shoes that have spikes in front and in the back (heel). These spikes present on the shoes offer the jumper, the traction that he / she needs.

Close-fitted leotard or vest and shorts are worn by athletes to help them clear the bar.

These are the two vertical uprights that support the horizontal crossbar in such a way that it does not fall if it is touched by a participant trying to jump over it. They must be installed 4.02m ± 0.02m apart.

The semicircular runway track is made of rubberized material that is laid over concrete. The radius of the runway is twenty meter (65.61 ft.) which further leads to the landing area that is the landing mat.

The landing mat area is made of plastic-covered layers of foam-rubber on which the athletes land after jumping over the cross-bars.

Before starting, the athlete spots his / her position from which he / she has to begin her approach for a perfect landing.

It is the most important part of the high jump than the takeoff. If an athlete starts with a wrong approach run then clearing the high bar becomes more challenging. Most of the athletes use a “J shaped” approach in which first three to five strides head in a straight line at 90 degrees to the bar and the final four-five strides being run in a curve. Some of the athletes prefer to run all the strides in a curve which is known as a “C shaped” approach.

3) Link between approach and takeoff

In the second last stride, the leg on the outside of the turn is bent, while the other leg (takeoff leg) is fully extended.

The athlete pushes off the takeoff leg and prepares for the rotation that he / she will make with the legs, hips and shoulders.

This is the extension of the takeoff. The athlete relaxes the body to concentrate on the position and continues the rotation by even raising the free leg to the level of the takeoff leg to prepare for achieving a horizontal position with back towards the crossbar.

When the athlete tips the shoulders back and brings the heels under thighs at that moment the athlete forms an arch shape which enables her hips to rise over the crossbar.

When the athlete’s hips have crossed the bar, then he / she flexes the hips, raises the chest and legs simultaneously. A correctly executed landing includes landing on the shoulders and not on the neck.

The event organizers set a minimum qualifying height which must be jumped over with athletes having 1.5 minutes for each attempt. All competitors have three attempts per height, although they can elect to ‘pass’ that is advance to a greater height despite not having cleared the current one. If the competitors are tied on the same height then the winner is the one with fewest failures at that height. If competitors are still tied then thereafter, a jump-off takes place to decide the winner. The jump-off starts at the next greater height. Each jumper has one attempt and the bar is lowered and raised until one jumper succeeds at one height. The jumper who clears all the heights amongst others is declared as the winner.