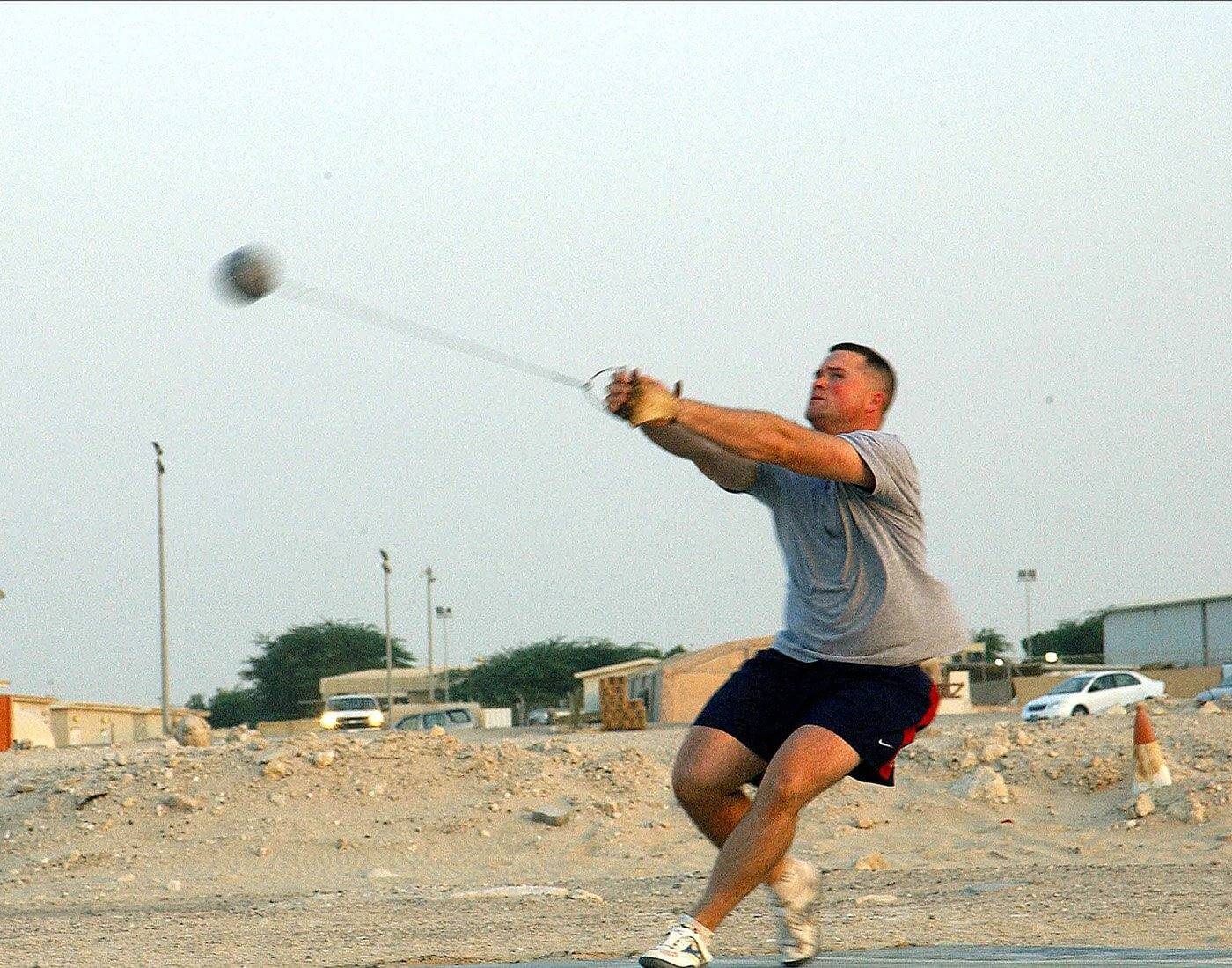 Hammer Throw is one of the four throwing events that take place as a track and field event in athletics. The other throwing events that are played as part of the throwing events are Shot Put, Javelin Throw and Discus Throw. In this athletes throw a metal ball weighing around 7.26kg (16 lbs.) for men and 4kg (8.8 lbs.) for women attached by a steel wire to a grip farther from the opponents to win the competition.

The sport concept has its roots connected to 2000BC. The Tailteann Games in Tara, Ireland was the place where a chariot wheel was gripped by its axle by the Celtic warrior Culchulinn, then whirled it around the head and threw it to a great distance.

Later, during the middle Ages, a boulder attached to a wooden handle was originated in England and Scotland and the wheel got replaced. This could be easily seen from the drawing that depicted the English king Henry VIII throwing a blacksmith’s hammer.

The modern sport for men is a part of Olympics since 1900 Games held in Paris and women’s competition took place for the first time at the 1999 IAAF World Championships.  The first Olympic medals were awarded in Paris in 1900, when the blacksmith’s hammer was replaced by the ball-shaped hammer that we know today. Moreover the first women hammer throw in the Olympics took place after 100 years at the Sydney Games.

In this the athlete propels the hammer as far as possible from a circle into a marked target area by covering the maximum distance.

Shoes with no cleats are worn by throwers to allow maximum adherence and to make the rotation easier.

Throwers wear a leather glove with thick fingers to ensure a solid grip on the handle.

A hammer used in hammer throw is equipment with a steel wire adjoined to a metal ball at one end and a handle at another. The metal head should be of solid iron, brass or any other metal but not softer than brass. In this athletes throw a metal ball weighing around 7.26kg (16 lbs.) for men and 4kg (8.8 lbs.) for women attached by a steel wire (no longer than 1.22m) to a grip.

When considering about Hammer Throw the first thing that comes is in mind is that each thrower requires speed, strength, power, co-ordination and fore most should know about the game play.

Therefore, to gain a perfect throw just follow the steps given below:

The athlete uses a leather glove with thick fingers to ensure a solid grip at the handle to have proper swing.

The athletes stand at the back that is facing towards the inside of the cage and swings the hammer in pendulum motion. They concentrate deeply and make sure that their muscles are relaxed to avoid muscle strain.

The throwers swing the hammer in two to three rotations using their arms and upper body. Their shoulder muscles remain relaxed as this produces 55 to 65 percent of its speed at release and enables the athlete to maintain balance.

After gaining momentum, the hammer is raised over the head and whirled in as the athlete spins. Usually, an athlete makes three to four spins by moving his/her body in a circular motion using a toe-heel movement of the foot.

After the rotation, the athlete’s legs straighten, the spine stretches and the arms shoot upward violently. The athlete’s fingers release their grip and the hammer is thrown at an angle of 45 degree at a speed of up to thirty meters per second (112 km / hr.) and further releases the hammer from the front of the circle to the landing area.

There must be at least six judges/officials, three operating at the circle and three in the field. The responsibilities of the judges include- watching their assigned area so that each rule must be followed, record all attempts made by the competitors and verify the results at the end of each round.

Competitors have 90 seconds to make each of their six attempts. The athlete with the best attempt, that is the longest throw is declared as a winner. If there is a tie, the placing are decided according to the second best throw and whoever has the longest throw is then declared as the winner. At major championships the format is such that a qualification session is followed by a final.