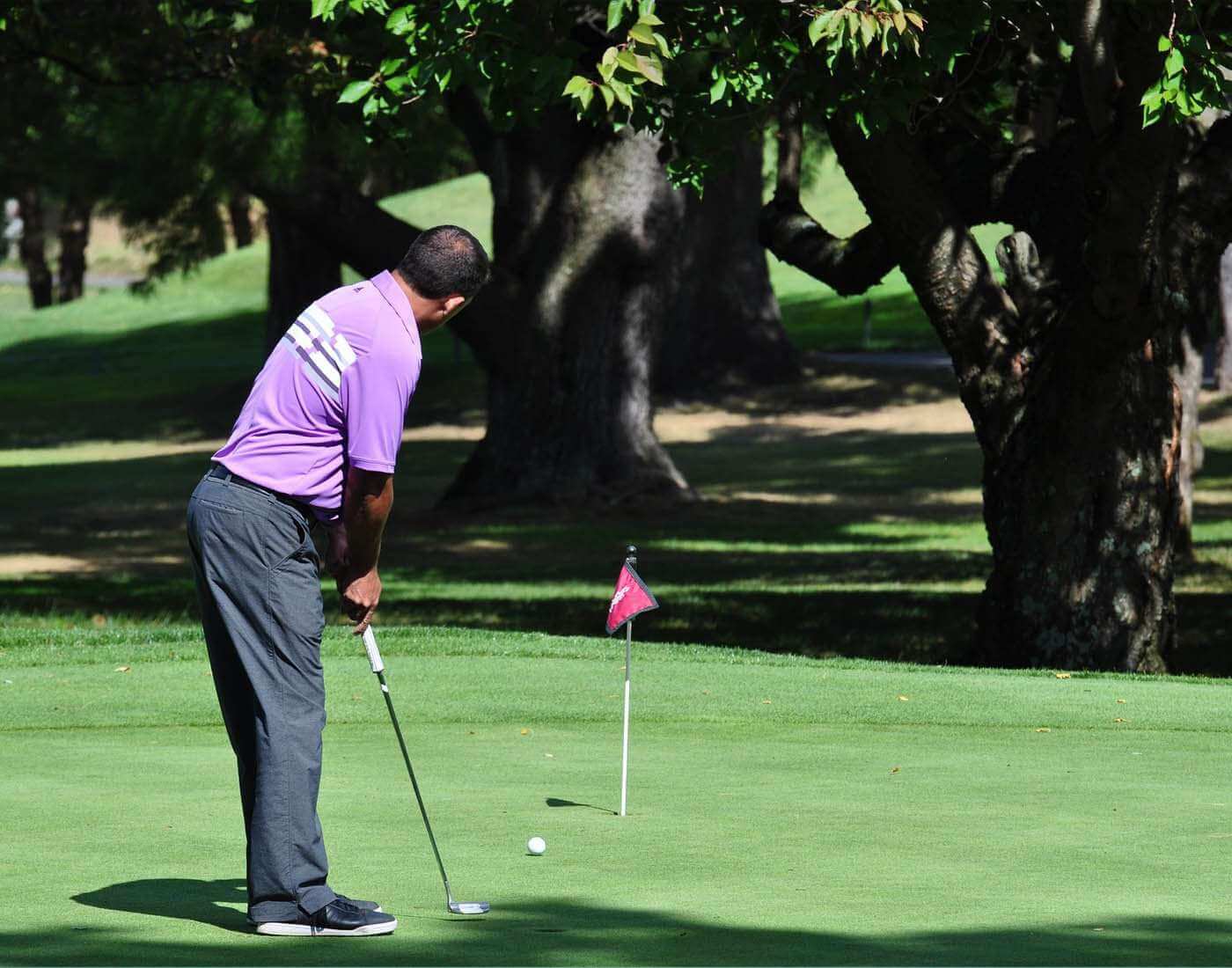 Golf is a precision and accuracy sport which is played by striking a ball using clubs into a series of holes on a golf course in as few strokes as possible. The modern game of golf was originated in the 15th century in Scotland, but the sport’s ancient origin is unclear and much debated. However, some research shows that a similar game named "colf" or "kolven" was practiced beforehand in the Netherlands and was arrived on the British Isles in the 15th century. The first rules of the game were compiled in March 1744 for "The Honourable Company of Edinburgh Golfers." The world’s first golf tournament in existence and the golf’s first major "The Open Championship" was first held in 1860 in Ayrshire, Scotland. The first women’s competitions were established at the end of the 19th century and the first golf course was constructed in 1864 in England.
To use as few strokes as possible to hit the ball into a series of holes arranged on a golf course.

The ancient history of golf and its origins are quite debatable, but the modern game of golf is believed to be originated in 15th-century Scotland. The standard eighteen hole golf course was first created in 1764 in St Andrews' Old Course (also known as the cathedral of golf) while the sport’s first and the oldest major tournament - The British Open - was first played in 1860 in Ayrshire, Scotland.

The sport of golf later got international popularity in the early 19th century when it reached the other parts of the United Kingdom, and then toward the British Empire and the United States.

The earliest versions of gold balls were thin leather bags filled with bird feathers. Then came the gutta ball, made from the sap of gutta tree, which travelled faster than the previously used leather balls. Slowly and slowly, players started to notice that the balls which have been used for long and were weary and teary, tend to travel faster than the other newer balls. Thus, they intentionally started pitting them for achieving maximum distance. Then, later in 1905, golf ball manufacturer William Taylor became the first person to introduce the modern day design - the dimpled ball.

Initially, in the ancient days of golf, players used club-shaped tree branches to hit the shots. Then along with the evolution of modern golf, wooden golf clubs were introduced which later transformed into the current day versions.

Golf bags were first introduced in the 1880s while the first motorised golf cart was invented in 1962 by Merlin L. Halvorson.

The first account of using a portable golf tee came in 1889 when two Scottish golfers William Bloxsom and Arthur Douglas patented the concept. However, it was made from rubber and had three rubber legs to hold it on its place on the ground.

Pitch and putt is a variant of sports which includes playing with holes which are less far from each other than standard golf holes. These holes are generally less than eighty yards from each other. It's played on artificial teeing surfaces and players are allowed to use only two clubs in which one must be a putter. The European Pitch and Putt association globally regulates this sport all around the world since 1999.

Beach golf is very surprisingly a team sports variant of standard golf. It was invented in 1999 in Italy. This type of golf is usually played in beaches or sandy places. There are two members in a team, and each one takes his turn in hitting the shot. The clubs used are wedges which are generally used in bunkers. A synthetic rug is used at the tee from which players start.

Urban golf is an informal variant of golf that doesn't involve much strictness into implementing "standard' rules, i.e. it can be played anywhere, anything can be used as an obstacle, and any ball can be used.

Speed golf is a variant of gold that involves completing the entire course in the minimum number of strokes and the quickest time possible. The rules included in playing golf and speed golf are almost identical except a few minor changes -

Crazy Golf is a putting only variant of golf usually played on an artificial surface. It's also called mini golf.

Target golf is a variant of golf in which players hit the golf ball into a large net of size 30x30 and score points depending on where their balls land. It also has a mini version for children, which involves using a small net of dimensions 15x15.

Disc Golf is another variant of golf in which players throw a frisbee or a disc to cross a course. The objective is to traverse the full golf course in the fewest throws possible.

Foot Golf is a variant of golf which is generally an amalgam of football and golf. The players have to kick the ball into the hole while taking the minimum number of shots. However, the distance of the hole from the tee is shorter in foot golf because it takes far more stress to putt a soft football than a hard golf ball.

Male and female athletes compete as individuals or in teams in golf events.

In this event, each golfer play the same course of 18 holes four times over four days and the one who has the lowest no. of strokes at the end wins the event.

In this format, golfers compete hole by hole and the one who wins the most holes is declared the winner.

Golfers wear collared shirts and trousers. T-shirt and jeans are not allowed.

Leather shoes having metal or plastic cleats are worn that provide grip and increase traction.

The golf balls have a diameter of 1.680 inches (42.67 mm) maximum with a weight of 1.620 ounces (45.93 grams) maximum. The balls are spherical with a uniform construction and the entire surface of the balls is filled with consistent dimples.

A golf club is a kind of golf bat used for striking the ball in a series of holes. The clubs are usually made of wood, iron or a hybrid of both the elements.

Golf bags are huge carrying bags used for storing and transporting the golf kits safely. The bags are designed to protect and organize the golf clubs.

The golf tee is widely used to hold the stationary golf ball before a player can strike it by the golf club. Apart from golf, it is used in other sports as well such as Baseball, American football and Rugby.

They are optional but usually worn by golfers to ensure better grip on the club.

A golf swing is a fundamental technique used to hit the ball with full force. The goal of swing is to direct the kinetic energy as much as possible to the club head so that when it hits the ball, all the energy will transfer to it, sending it into flight. A golf swing starts with a good setup and includes a good grip, correct stance, takeaway, the backswing, the downswing and impact and the follow-through.

A good grip on the club is a player’s only means of controlling the clubhead and bringing it into impact in a square (straight) position.

The three main types are:-

There are three main types of strokes in golf:-

Some of the shots played in golf are:-

There is no standardized playing area for golf. It is played on a course on which a series of 18 holes are arranged. Each hole must contain a tee box and a putting green which contains the actual hole or cup which is 4.25 inches in diameter and at least 4 inches deep.

There are other forms of terrain in between like the fairway, the rough and other hazards but each hole on the golf course has unique features with specific layout and arrangement. Most of the courses have par-3, 4, 5 or 6 holes.

The distances of the holes from standard tees vary according to the par. Many times, nine holes courses are used that are played twice for a full round of 18 holes.

Referee: A referee is appointed by the Committee to apply the rules and decide questions of fact. He/she must act on any breaching of the rules that he/she observes or is reported to him/her.

To use as few strokes as possible to hit the ball into a series of holes arranged on a golf course.