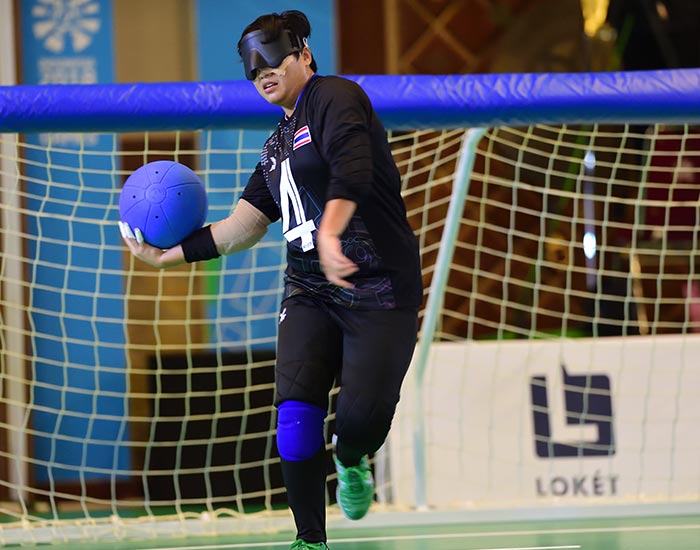 Goal Ball is a team sport designed especially for blind athletes in which the players try to throw the ball that has bells embedded in it, into the opponent’s goal. The sport was originally discovered by Austrian Hanz Lorenzen and German Sepp Reindle in the year 1946 as a way of rehabilitating the visually impaired veterans after World War II.

Goal ball emerged globally as a competitive sport between the 1950s and 60s and was also nominated as a demonstration sport at the 1976 Summer Paralympics held in Toronto.

It was then added to the 1980 Arnhem Summer Paralympics and became the first Paralympic sport that was entirely designed for disabled players. The International Blind Sports Federation is the official body of the sport that governs a range of sports for the blind and partially sighted.

The chief objective of the sport is to roll the ball into the opponent’s goal while the opposing players try to stop the ball with their bodies.

Goalball was initially formulated in 1946 by the Austrian Hanz Lorenzen and German Sepp Reindle as a method for helping in the recovery of visually disabled World War II veterans.

The game's first world championship was held in Austria in 1978.

In 2011, the long-standing IBSA Goalball Subcommittee looked to isolate from IBSA and structure another universal body, the World Goalball Association.

The events taking place in Goal Ball are -

Two teams each containing three players with one to three substitutions per side compete against each other.

The players have certain positions in the play known as center, left and right wings though they are not player specific, the athlete may choose to play on the position he feels is best suited in.

In order to score a goal the player must roll or bounce the ball down the length of the court to the opponent’s goal. Typically, the player having the ball will stand, place themselves and with the help of the tactile lines, sounds from teammates, or the crossbar of their own goal. The player will then move forward, lean low, and roll or sidearm the ball down the playing court.

The defensive players remain within the team area, generally in alternate and/or overlapping positions so as to avoid collisions. When they hear the other team throw the ball, they ‘lie out’ that is they slide on their hips and stretch their arms and legs wide apart in order to cover as much area as possible in order to stop the ball entering their goal.

As per the guidelines of International Blind Sports Federation the field of play shall be 18 meters in length and 9 metres in width. The goal posts placed at either end and opposite to each other are equal to the width of the court. The court is divided into six equal sections each measuring 3 by 9 metres. The middle of the two sections is regarded as the neutral zone.

The weight of the ball is 1.25 kilograms and contains eight holes with several noise bells with 24 centimeters diameter.

There are two referees each of which remains along the sideline at one half of the court. One referee is known as ‘table-side’, while the other is called ‘off-table side’.

There are a total of four goal judges in the game who are placed to the side of each goal edge. Goal judges are important to the game’s speed, recovering the ball going off the court, and dropping it at the side hesh mark of the team area so that the play can restart.

Two ten-second timers are there to keep track of the time between when a defending player comes in contact with the ball and when it is thrown, calling ‘10 second’ penalties when applicable.

The scorer’s job is to keep track of the number of time-outs and substitutions taken by a team.

When the period’s time count down to zero, the game timer restarts the game by blowing a whistle. A back-up timer is used in case of power failure to the venue.

A goal is of one point and is said to be scored only when the ball completely crosses the goal line. The team with higher no. of goals, in the end, wins the play. In the event of tie, two three-minutes overtime periods are played for a golden goal which decides the game for either of the team.

The chief objective of the sport is to roll the ball into the opponent’s goal while the opposing players try to stop the ball with their bodies.