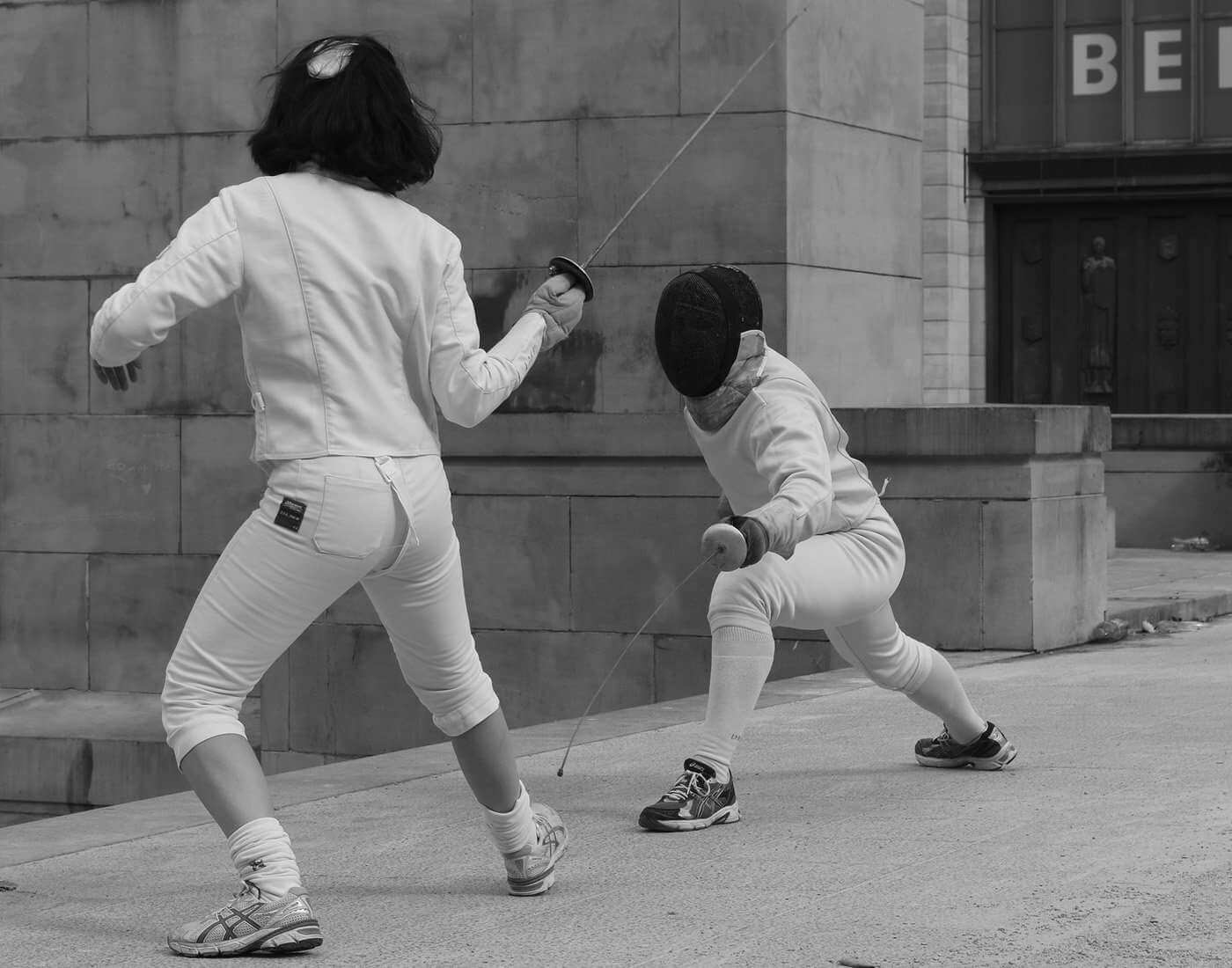 Fencing is a combat sport which consists of bouts between two fencers armed with lightweight, blunt-tipped swords. The sport is primarily of three types distinguished by the type of sword used: foil, épée and sabre. Fencing has its roots in the development of swordsmanship for self-defence.

However, the modern sport was originated in the 18th century in an Italian school of fencing of the Renaissance and improved by the French school. Fencing was a part of the first Summer Olympics in 1896 with foil and sabre events and the épée event was included in 1900. Women’s foil event was first contested at the Olympics in 1924, épée event in 1996 and sabre event in 2000.

To win more points than the opponent by hitting the target areas on the opponent’s body with the tip of the weapon.

Swordplay has been practised for a vast number of years, and the modern day style of fencing started as a type of military training. However, it didn't turn into a sport until around the fifteenth century.

Swordplay has been practised for a large number of years, as confirmed via carvings delineating fencers found in a sanctuary close to Luxor in around 1190 BC. From the sixteenth to the eighteenth century, duels were normal, with soldiers utilising an assortment of weapons including quarterstaffs and backswords. Such sessions were gory and deadly.

Fencing started to move from a type of military training to a full-fledged sport in either the fourteenth or fifteenth century. Both Italy and Germany make a case for its beginnings, with German fencing experts organising the principal guilds in the fifteenth century, the most eminent being the Marxbruder of Frankfurt, framed in 1478.

Three advancements in the seventeenth and eighteenth century prompted the fame of fencing as a sport: the "foil" – a weapon with a straightened tip; a lot of standards administering the objective zone; and the wire-work veil. Together, these improvements guaranteed the wellbeing of competitive fencers.

Fencing was incorporated at the 1896 Games in Athens for the first time and has stayed on the Olympic program from that point forward. The women's fencing rivalry entered the Games in 1924 in Paris. The foil was, at first, the primary weapon utilised by ladies, until the 1996 Games in Atlanta, when women's epee was presented. Women's sabre event showed up initially on the Olympic program in Athens in 2004.

Male and female fencers compete separately in bouts either in individual or team competitions.

Foil fighting offers the smallest target area which is the opponent’s torso. The scores are given only when a hit is landed in that area.

In épée fencing, a hit can be registered anywhere on the body, but most attacks are made on the closest parts of the body like arms, hand or front foot.

In sabre fencing, the whole upper body (above the waist) is a target area including the head (and except the sword hand). Sabre fencing is lightning fast and usually consists of attacks and feints.

The playing area for fencing is known as “piste” which is a narrow raised platform, usually 14 meters long and 1.5-2 meters wide. The area consists of five lines at right angles to its length in which one is a center line which is drawn as a broken line, two on-guard lines at 2 meters on each side of the center line and two lines at the rear end of the piste which are 7 meters from the center line. At the last two meters of the piste at each side before the rear limit lines, the area must be clearly distinguished (by a different colour) to indicate the closeness from the rear end.

The techniques that are performed with the purpose of landing a legal hit on the opponent are the offensive techniques. The major ones are:

Attack- In this technique, the fencer extends his/her arm and continuously threatens the opponent’s target.

Riposte- Fencers use this technique after a successful parry. After parrying an attack, the fencer has the opportunity to make an attack and take right of way.

Feint- It is a false attack with the purpose of provoking a reaction from the opponent.

Lunge- This technique is executed by extending the front leg by using a forward kicking motion and pushing the body forward with the back leg.

Parry- It is a technique used to deflect or block an incoming attack and is executed by deflecting the blade away at the time of the execution of an attack by the opponent from the fencer’s valid area and is used to obtain the right of way.

Point in line- In this technique, fencer’s sword arm is kept straight and the tip/point of the sword continually threatens the opponent’s target area.

A referee directs the bout, directs the judges, scorers and timekeepers, penalizes faults, awards the hits and maintains order.

Judges assist the referee and watch for the use of unarmed hand or arm of the fencers, check substitutions of the valid target and hits scored on the floor in epee events and check for any other offenses defined in the rules.

To win more points than the opponent by hitting the target areas on the opponent’s body with the tip of the weapon.