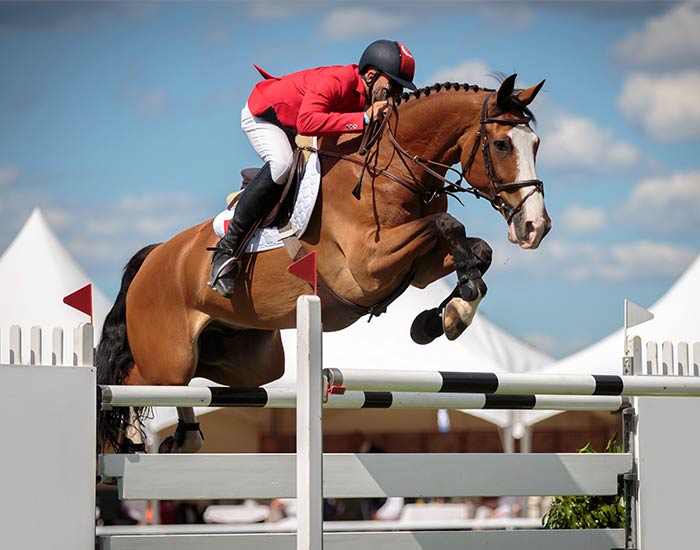 Eventing is an equestrian sport which is often termed as an “equestrian triathlon”. It is a combination of dressage, cross-country and show jumping events and takes place as a three-day event (sometimes as a one-day event). The sport seems to have originated from a comprehensive cavalry test requiring mastery of various types of riding. The first competition of the eventing took place in 1902 in France at the “Championnat du Cheval d’Armes” and was included at the Olympic Games in 1912. Women started competing in Olympics since 1964. Equestrian sports are one of those few sports in which men and women compete against each other.

Male and female athletes compete as individuals or in teams in eventing competition.

The arena for dressage phase is same as in individual dressage event. Cross-country test takes place on a long outdoor circuit consisting of around 12-20 fences at lower level competitions andaround 30-40 fences at the higher levels. The fences consist of solidly built natural objects likestone walls etc. and various obstacles like ponds and streams, banks and drops and combinations consisting of several jumping efforts.

It is the first test of eventing which is described as “the highest expression of horse training” in which the horse and rider are expected to perform a series of predetermined movements from memory.

This is the most demanding test in the competition during which the fitness of horse and rider are tested. Competitors gallop over a set distance, jumping a variety of solid obstacles, including water hazards and drop fences.

Each rider guides his/her horse through a course that includes up to 16 jumps. The course tests the jumping skills of the horse and rider as well as the fitness and stamina of the horse, which will berecovering from the exertions of the previous day.